Reappraising our values in international relations 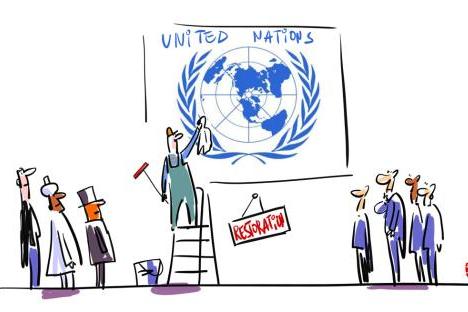 The fact that that foreign policy is becoming less and less ideology-driven may be regarded as an optimistic sign.

This year has been replete with important, and sometimes historic events, globally and regionally, notably the Arab Spring and the eurozone crisis. New and ever more convincing evidence has shown that a radical transformation of global governance is taking place. The co-ordinates of international relations have been shifting towards development issues central to world politics. At the same time, the kind of transformation that reflects the endgame of processes that began at the turn of the Seventies is gaining pace, whether we look at the Arab world or the crisis of liberal capitalism.

There is no doubt that, along with the positive effects, this shift in international relations has a downside, too. For example, the collapse of established perceptions of values that emerged in the postwar period that were accepted as constants. But the former system of values has continued to exist by inertia among the overwhelming majority of world political elites over the past 20 years. Inertia is perhaps the most accurate reflection of that reality, which was really never anything more than wishful thinking.

One can only wonder how such self-delusion could have survived for so long after the end of the Cold War, which, as has now been brought home to many, marked the end of the old world and a deferred beginning to the new world that has come to be referred to as the “fast-changing” world. As the American pundit Leslie Gelb wrote in Foreign Affairs magazine, many in the West had made a fundamental mistake in assessing the situation at the end of the Cold War.

This is understandable because, like any event on a historic scale, it could not have been prepared for, either intellectually or politically. In effect, not only the geopolitical balance in the world had been upset, but competition between different development models and values had been eliminated, even if temporarily and only at the level of illusions. Lack of competition contributed to a sense of the “end of history” and complacency, which, in turn, engendered self-destructive trends in the domestic and foreign policies of a number of states.

As a result, there was a growing similarity between the main international players, who all saw a narrowing gap between the declared foreign policy goals and available resources for achieving them, in line with the dictum: “You must cut your coat according to your cloth.” This kind of convergence went a long way towards promoting a unifying and positive agenda in international relations. The attitude to that key trend may range from total rejection to a wish to live in one’s own world engendered by a complex of national mythologies, instincts and prejudices. Yet I think that trend holds out a promise of overcoming the current contradictions between various countries and groups of countries, including the US and the European Union, BRICS and a whole number of leading regional powers. The formats for resolving these contradictions are the UN Security Council, where many of these countries are represented, but also wider structures such as the G8 and the G20.

Another optimistic sign characterising modern international relations is the growing tendency for foreign policy to become less and less ideology-driven. This pragmatic approach is widely recognised by virtually all leading international players, including the EU, Russia and China. Britain is no exception. I would attribute the start of normalisation of Russian-British relations to a wish to assert pragmatic national interests – as a constant of foreign policy – and to promote them through diversified networking diplomacy. We are not talking about co-opting Russia or Great Britain into this or that system of alliances, described at one time as “European entanglements”.

Fyodor Dostoyevsky, in his Pushkin speech in 1880, said that Russia had a mission to promote “a final resolution of European contradictions”. During its Soviet incarnation, Russia coped with that task brilliantly with regard to the West European countries. The time has now come to tackle it on a European scale, at the level of all the Organisation for Security and Co-operation in Europe (OSCE) member states. This is the main thrust of the idea of creating a Euro-Atlantic and Eurasian  security community, which was supported at the OSCE foreign ministers’ meeting in Astana a year ago. The recent OSCE foreign ministers’ meeting in Vilnius and, indeed, the discussion of Euro ABM, has demonstrated that the aim  is easier to proclaim than to accomplish.

Even so, the experience of the past 12 months, disappointing though it may be, shows that positive trends in international relations are growing stronger and the price of any alternatives, including actions outside international law, bypassing the United Nations Security Council and consensus politics in general, is growing. One need hardly be more specific than that but one might hope that the world and each country individually is on the threshold of a radical reappraisal of values in domestic and foreign policy – and that provides a solid foundation for optimism concerning the future of the world next year.