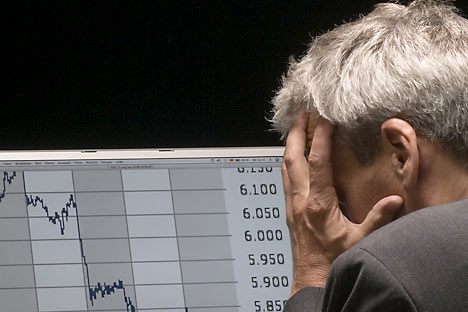 While Russia is rising, America is falling into despair. Source: PhotoXPress

Ben Aris explains why despair in the West is now higher than in Russia.

In October, the US Census Bureau announced that one in seven Americans is living in poverty — the highest number since record-keeping began 53 years ago. Two weeks later, the UK announced that the number of people out of work has reached its highest level in 17 years, and youth unemployment has hit a historic high at well over 20 percent, according to the Office for National Statistics. Spain capped the round of bad news by announcing that unemployment there is 23 percent — its highest figure ever and the highest in the EU. Even with the West’s low inflation, the misery index is already very high.

But unemployment coupled with inflation alone doesn’t really tell the whole story. What does it matter if the cost of an iPod rises by 10 percent a year if you can’t even put food on the table or heat your home?

The despair index allows a direct comparison between the West and emerging markets. The surprise is that central and eastern European states are doing better than the developed economies of the West.

And thanks to record low poverty and unemployment numbers in November, Russia’s despair index score of 25.5 is now lower than that of the United States, which has a despair level of 28.1.

Russia’s score highlights the transformation the country has been through since the collapse of the Soviet Union in 1991. Life for Russians at the start of the Nineties was truly horrible. Russia’s misery and despair indices were into the thousands thanks to hyperinflation, but as the decade wore on, the despair index fell steadily from around 90 in 2000 to the current level. It is easy to blame the rising despair on the current crisis, but the US Census says poverty levels in the US have been rising since well before the current crisis began. Economists say that most American families were worse off in 2000 than they were in 1990.

There are some problems with comparing poverty across countries. With a poverty line of $11,139 per annum, America’s poor are a lot better off than most Russians, who earn an average of $9,600. However, the US Census Bureau says half of those living in poverty live in “deep poverty” with incomes half of the official poverty rate, which would make them poor even by Russian standards. The existence of poverty in the “rich” world only underscores the fact that western democracy is flawed and emphasises the increasingly desperate need for deep structural reform. There has been a lot of talk of emerging markets overtaking the West, but for the majority of people, the BRICS have already caught up. If you are rich, then you are better off living in America, but if you are poor, then the chances of your life improving are now brighter in Russia.

Ben Aris is the editor and publisher of Business New Europe.

The article is abridged and first published in the Moscow Times.