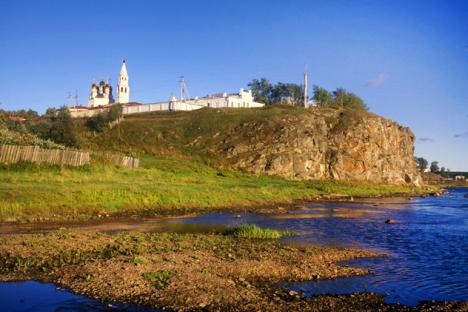 Verkhoturye, one of the earliest trading outposts connecting Europe and Eurasia, is slowly throwing off its backwater reputation after years of stagnation and disregard to become one of Russia’s more appealing destinations.

One of the most historic sites in Russia today is the town of Verkhoturye, located on the upper reaches of the Tura River some 185 miles to the north of Yekaterinburg. With its fortress spectacularly situated overlooking an intimidating stone cliff above the rocky Tura, Verkhoturye played a critical role in extending Russian authority throughout the east during the 17th century. Currently around 9,000 people inhabit the area, yet its small size belies the fact that for much of the 17th and 18th centuries Verkhoturye was the primary point of transit from European Russia across the Ural Mountains into the vast Siberian domains.

Although the Tura River, at a length of about 620 miles, is not particularly large by Russian standards, it is a crucial link from the eastern watershed of the Urals to the great Siberian river networks. With the founding of Tobolsk in 1585, Russia had a strategic anchor in western Siberia at the confluence of the Tobol and Irtysh Rivers. In 1595, Tsar Fyodor, son of Ivan IV (the Terrible), announced a search for new pathways to Siberia. The challenge was to find a more direct way across the Urals to the Tobol basin. The Tura, which flows into the Tobol River south of Tobolsk, proved to be the logical choice. Shortly thereafter, Artemy Babinov, a free peasant from Solikamsk, blazed a trail across the Urals from Solikamsk to the Tura River.

Within a remarkably short period of two years, the almost 185 mile path was improved into a state road that led to the fortified settlement of Verkhoturye, founded in 1598. In the same year, a log church was built and dedicated to the Trinity. Shortly thereafter, Verkhoturye was designated the primary customs point for passage to Siberia. This tight control on movement to and from Siberia allowed the state to maintain its revenues through taxes on goods such as fur pelts – especially the highly valued sable. Indeed, the ancient town shield, officially confirmed in 1783, contains a standing black sable. The Verkhoturye area also became a center for shipbuilding.

Throughout the 17th century, Verkhoturye bustled with activity as salt, manufactured goods and other essential items were shipped to new settlements in Siberia, while a flow of fur pelts made its way back toward Moscow. This “black gold” was so valuable that a separate fur treasury was created, which enabled the pelts to be carefully guarded and assessed.

In addition to the settlement of townspeople adjacent to the fort, a separate quarter was established at the beginning of the 17th century for the drivers that kept the goods moving under the most difficult of conditions. Soon following, another district took shape across the river. This basic arrangement still survives, with a suspension footbridge connecting the two sides.

The Russian expansion into Siberia was closely connected to the Orthodox Church, which quickly established its presence in the new settlements. In 1604 – less than a decade after its founding – Verkhoturye was the site of one of the first monasteries in Asian Russia. Dedicated to St. Nicholas and to the Transfiguration of the Savior, this monastery was followed in 1621 with the establishment of the Convent of the Intercession of the Virgin, the first convent in Siberia.

During the first century of its existence, Verkhoturye consisted of log buildings; but by the start of the 18th century, the fortress, or kremlin, ensemble was rebuilt in brick as a symbol of authority, high above the Tura River on Trinity Rock. The centerpiece of the ensemble was the Trinity Cathedral, designed after the church was reconstructed between 1703 and 1709. The cathedral, with its soaring bell tower, is unique not only for its spectacular location, but also for its vertical design, accented with a combination of elements from the Italian renaissance, medieval Muscovy, and Ukrainian baroque. The Russian flair for ornament is especially evident in the remarkable ceramic work on the facade. Fortunately, the structure was completed just before Peter I (the Great) redirected Russia’s brick masons to the building of his new capital, St. Petersburg. Ransacked during the Soviet era, the Trinity Church has recently been the recipient of superb restorative work.

Although Verkhoturye declined as an economic hub after the main route through the Urals to Siberia shifted southward to Yekaterinburg in the 1760s, Verkhoturye remained an important religious site, whose churches and monasteries received numerous pilgrims. An important factor for Verkhoturye’s status as a major pilgrimage center was due to the veneration of the local saint known as Simeon of Verkhoturye (ca. 1607-1642). His parents apparently perished in the chaos surrounding the Time of Troubles in central Russia and he fled to the Urals, where he found refuge in the forests near Verkhoturye. According to the account of his life compiled at the end of the 17th century, Simeon devoted himself to a prayerful, ascetic existence, helping the peasants in the neighboring villages. He also worked among the indigenous Mansi people.

In 1704, Simeon’s relics were transferred to the Monastery of St. Nicholas, which eventually attracted thousands of pilgrims annually. By the early 20th century, the number of visitors had become so great that the monastery constructed the enormous Cathedral of the Elevation of the Cross, considered the second-largest church in Russia. Nicholas II took a personal interest in this project, which was dedicated with much fervor in 1913.

In addition to its rich tradition of religious architecture, Verkhoturye also has well-preserved enclaves of 19th and early 20th-century buildings, including traditional log houses with carved exterior decorations. During the Soviet period, the churches were closed and the town became a center for Gulag administration with a large network of forest camps that exploited the labor of thousands of prisoners.

In more recent years, Verkhoturye has slowly recovered from its difficult past and subsequent economic depression. With the support of the regional administration and the Russian Orthodox Church, a number of historic sites are being restored, including the Monastery of St. Nicholas and the Cathedral of the Elevation of the Cross. Notably of special, technical interest is the cathedral’s ceramic iconostasis, originally designed by the Kuznetsov firm in Moscow. The ceramic was smashed to bits during the Soviet period (when the monastery was used as a prison), and scrupulously recreated from surviving fragments by a team of restoration specialists. This project is indicative of the spirit of regional cooperation and renewal that exists in many small, historic towns throughout Russia.