And I am telling you I am not going… 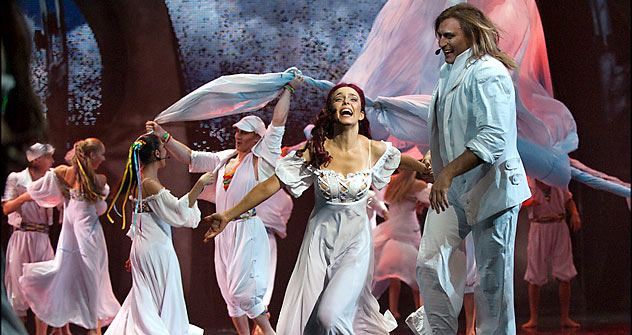 Like the Dreamgirl spurned, the Russian musical had had to fight for survival. But it’s safe to say it’s here to stay.

October marked the tenth anniversary of the Moscow premiere of “Nord-Ost,” the first homegrown Russian musical. In the years since then, this light-hearted genre has been forced to fight hard to survive on hostile Russian soil. Even so, it has demonstrated its right to exist.

It is unclear how long “Nord-Ost” might have gone on playing at the Dubrovka Theater if not for the terrorist act that took place there in October 2002, when the entire audience was taken hostage during a performance. The terrorists’ demand was the Russian withdrawal of troops from Chechnya. While most of the 900 hostages survived the attack, 130 were killed. The play, which had been a rousing success, was unable to regain its momentum.

But for an entire year, daily performances of “Nord-Ost” had proved the vital potential of the musical in Russia. On the wave of that success new projects appeared.

The tragedy of Nord Ost has occluded the fact that on October 19, 2001, the opening-night audience at Nord-Ost witnessed the birth of a new genre. Spectators were entranced by the powerful sets of Zinovy Margolin, the famous bomber plane and the schooner rising up out of the ice, and the dances of indigenous Nenets. The script, the music and the lyrics were written by Aleksei Ivashchenko and Georgiy Vasiliev, and the end result had a marvelous integrity. Based on “Two Captains,” a novel by Veniamin Kaverin, the musical was full of the sincere enthusiasm of pioneers. Its leitmotif was the inspiring slogan: Fight, search, find and never give up.

In the United States, the musical genre has been around for more than a hundred years and has developed gradually. In Russia, there weren’t many actors who could sing and dance in a musical, and Russian audiences continued to insist that musicals were not for them. Theater managers learned through trial and error.

Russian producers began importing musicals that they personally liked, without considering how audiences might react. They predicted that Russian theatergoers would rush to see an English-language production of “42nd Street” starring the Broadway star Meredith Patterson simply because it was a classic of the genre. They were wrong. To delight in a naïve fairy tale about the American Dream, it appears that one needs to have grown up with that dream.

French musicals have been more successful. They are beautiful and melodic, close in style to the cabaret songs loved by Russians. “Notre Dame de Paris,”with its hit song “Belle” won a whole army of female fans and ran for two years at Moscow’s Operetta Theater. Another success was the musical “Romeo and Julie,” which ran for two-week blocks rather than two years straight, but possessed the same romantic manner of a costume concert.

In Russia, non-touring musicals came to be viewed with skepticism, until the Dutch company Stage Entertainment arrived in Moscow. This company could afford to put money into developing the Russian market, without an immediate return on its investment. Stage Entertainment set about methodically introducing Russian theatergoers to the musical as a genre. The first show they produced in Moscow was “Cats” which, although an absolutely recognizable brand, was not typical of the genre. This Andrew Lloyd Webber musical once seemed strange even to sophisticated audiences in London. Muscovites were also very surprised: what was this feline concert that has no plot, but is all about ears and tails and long dancing interludes?

The next project was more successful: “Mama Mia” With its slew of pop songs by famous groups and its simple heartwarming plot, this musical played to full houses for two years. The Moscow audiences consisted largely of nostalgic Russians who had grown up listening to ABBA.

In Moscow, where quality productions for the whole family are rare, the spectacularly beautiful story of “Beauty and the Beast,” was a smashing success—despite the grumbling of aesthetes.

“Zorro” was Stage Entertainment’s least successful venture. This action-musical with sword fights, impressive stunts and flights through the air seemed so dramatically pompous that nothing could save it: not the fiery flamenco of Spanish dancers, not the hit songs by the Gipsy Kings, not the guest star Nonna Grishaeva.

Only now, with its fifth production in the offing, has Stage Entertainment chosen a classic of the genre: Rodgers and Hammerstein’s “The Sound of Music.” Of course the 1959 Broadway version, as compared with today’s high-tech productions, looks very modest and old-fashioned. Director Evgeny Pisarev tried to modernize it, but the owners of the rights to this musical ruled out any changes to the book or score. The only innovations in this Moscow staging are the stylish sets by Zinovy Margolin. The musical’s principal adornment is its children’s troupe, which cannot fail to move even the most cynical theatergoer.

It has to be acknowledged that not one Russian-made musical has managed to attain the level of “Nord-Ost.” But then this new genre is flourishing in Russian repertory theaters. In Moscow alone there are some fifty musical productions now in performance. To say nothing of the productions playing in the provinces — in Yekaterinburg, Perm, Novosibirsk. Alexander Zhurbin produces a new musical every year, methodically setting Russian classics (from Dostoyevsky to Pasternak) to music. But staging a musical in a repertory theater is always a compromise. The regular members of a repertory troupe can rarely meet the high demands, while the limited budgets of state theaters constrain the directors.

The most successful musical model so far has been the co-production, when musicals are mounted at a state theater (so that the space, equipment and stagehands do not have to be paid for), but with additional production funds and actors who have made the cut at special casting calls. For example, the Russian musical “Monte Cristo,” mounted at Moscow’s Operetta Theater this past September launched a record-breaking fourth season.

Can Russian musicals compete with imported Western productions? Ten years is not long for development. But in that time Moscow has managed to form a group of professional actors who specialize in musicals. Then again, competent stage managers, directors, and soundmen are still in catastrophically short supply.

One of the main problems in Moscow has been a lack of available stages. In February 2012 a new musical theater is slated to open. Its first project will be a Russian-American production of “Times Cannot Be Chosen,” followed by the Broadway hit “Rent.” In time, this theater plans to create Russia’s first-ever school of musicals. That perhaps is the most important step on the road to Russia one day producing musicals capable of competing with Broadway’s best.