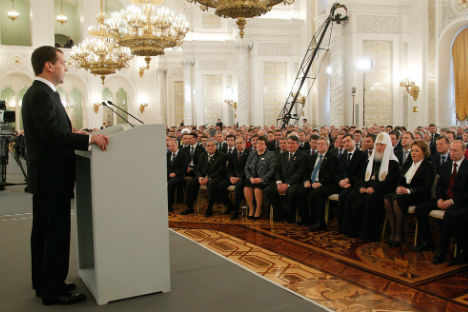 Russian President Dmitry Medvedev appreciated Russia’s contribution to coping with corruption during his annual presidential address to Russia’s Federal Assembly before he steps down as president. Yet the most significant part of the President’s speech is his liberal proposal to reform Russia’s political system.

The results of Russia’s anti-corruption efforts “have seen more than 3,000 Russian officials brought justice over the first six months of 2011,” said Dmitry Medvedev in his annual presidential address to Russia’s Federal Assembly.

Medvedev also said that Russia should change the system of electing regional governors and return to direct voting because it will give a good opportunity to all politically active citizens to make their own choice and encourage them to participate in Russia’s political affairs.

“We should give a legal right to all active citizens to participate in the political life,” he stressed.

The comprehensive political reform of Russia’s political system should embrace not only the election system of local authorities but also Russian parties. Medvedev wants to simplify the registration process of political parties for elections and allow them to get official registration on the basis of a petition of at least 500 people, which represent at least 50 percent of the Russian regions.

He also proposed to cancel the rule that requires parliamentary candidates to collect signatures for their candidacy to participate in the State Duma elections to regional legislative agencies. At the same time presidential candidates would be required to collect fewer signatures to run in elections.

Currently, independent candidates have to submit two million signatures from all over Russia. Medvedev proposed to reduce this number to 300,000. Considering candidates nominated by parties that are not represented in the parliament, the number could be reduced to 100,000, he said.

“It’s too early to congratulate us on registration, but this response is a positive sign,” said Mikhail Kasyanov, the former Russian prime minister and the co-founder of the People’s Freedom Party (PARNAS) that failed to get registration. “At least, we can see some attempts to establish the dialogue between authorities, opposition, and society. The major point is that, in their annual addresses, both Putin and Medvedev admitted that the political system created by them is defective and should be reformed. The next positive sign is that authorities realize that the parliamentary and presidential elections spur public unrest. The connection between Putin’s and Medvedev’s addresses and the post-election protests is obvious because both the president and the prime-minister started their speeches with this topic. They listen to the middle class gathering for rallies in Moscow.”

Russian political expert Dmitry Oreshkin is less optimistic toward the President’s move. “It’s impossible to call Medvedev’s proposals timely,” he said in an interview to Kommersant daily. “All this should have been done 10 yeas ago. But we had the direct elections of governors cancelled 10 years ago. And, likewise, we took these tough measures to restrict the number of the parties. Now we try to take reverse measures. After all, we remember that Dmitry Medvedev recently claimed that Russia would not return to direct elections of governors even in 100 years.”

“I personally participated in the decision-making process to change the mechanism of granting power [to regional leaders],” said Medvedev in September, 2009 during the Valday club discussion which involved political experts and pundits. “I believe it was correct. I don’t see why we should turn this decision down now and even in 100 years.”

Combined report based on the information from Russia Today, RIA-Novosti, and Kommersant.