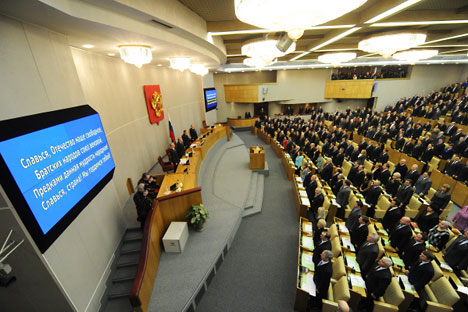 Russian MPs singing the national anthem before the first session of the State Duma. Source: RIA-Novosti

At the first plenary session of the State Duma, the United Russia party made it clear that it was going to maintain full control over parliament. On many issues, the opposition will not argue.

Despite losing its constitutional majority in the Dec. 4 State Duma elections, United Russia still retained most of its seats. As a result, at the first meeting of the new Duma on Dec. 21, United Russia also retained most of the committee chairs. Sergei Naryshkin, former chief-of-staff to President Dmitry Medvedev, became the speaker of the Duma, despite objections from opposition parties, which nominated their own representatives for this position.

“Sergei Naryshkin will have a chance to make the best of his diplomatic and negotiating skills,” said Olga Kryshtanovskaya, Director of the Center for the Study of Elites at the Sociology Institute of the Russian Academy of Sciences.

Twenty-nine committees are being formed in the new Duma. The parties in the parliament have signed a package agreement giving 15 of the committee chairmanships to United Russia. The Communist Party deputies get six committee chairs, while the Liberal Democrats and Just Russia received four each.

Such a realignment of forces is a major blow to United Russia, which had 26 committee chairs out of 32 in the last Duma.

Nevertheless, the ruling party managed to retain control over the Duma’s key committees, including the budget and tax committee and the committee on constitutional law. This means that not a single legislative initiative promoted by opposition-controlled committees can be passed without approval by the committees led by United Russia deputies.

A deputy from the Communist Party, Admiral Vladimir Komoyedov, was appointed chairman of the Defense committee. In the past, the Communists had opposed reforms of the armed forces, including a move from an all-conscription force to a partial volunteer army. Now, however, the reforms are mostly completed and it is hard to imagine that Komoyedov will come out against the government’s plans to increase defense spending. This is one area where the party of power and the opposition agree.

A Liberal Democrat will chair the committee on NGOs and religious organizations. The party’s election campaign was dominated by nationalistic slogans, which also lie at the heart of its program. The committee is unlikely, therefore, to come up with any legislative initiatives to provide more liberal conditions for NGOs, especially those financed from abroad. In this respect, the Liberal Democratic Party coincides with Vladimir Putin, whose attitude to such organizations is well known.

Liberal Democrats also hoped to get their hands on the international affairs committee but this did not happen: domination of foreign policy issues went to United Russia. So it is unlikely that any major changes on this front will appear in the new Duma.

Apparently, the government will still be able to get the solutions it needs through the newly realigned Duma but not as easily as during the last four years, when United Russia controlled two-thirds of the seats. Yet political analysts and politicians alike are hopeful the new Duma will not simply be a rubber-stamp body.

“The new Duma will work in a new, more debatable format, which will make discussion of bills and their passage more difficult,” said Dmitry Orlov, General Director of the Agency for Political and Economic Communications.

“We understand that there will be a fifth force in the State Duma (in addition to the four factions), very important and powerful: civil society,” said Andrei Vorobyev, Chairman of the United Russia faction in the Duma and head of the party’s Central Executive Committee. “Every important decision will be discussed by experts in a fully open way in order to gain a thorough understanding of how this or that law will work.”

This Duma will be in place until the next round of parliamentary elections, scheduled for December 2016