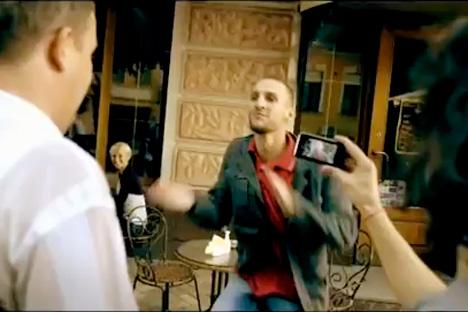 A footage from the anti-smoking social ad. Source: Youtube / Sanchesbluz

Public service announcements have become more prominent on TV, billboards and the Internet in Russia – not because they have become more relevant, but because awareness of their relevance has increased. As the quality of public service ads has improved both in terms of graphics and message, more organizations are interested in getting ads on the air. New spots to promote positive behavior have appeared alongside traditional ads that discourage bad choices.

At the insistence of President Dmitry Medvedev, a public communications campaign called “People Cannot be Divided this Way” has been launched as part of the state-run Accessible Environment program. The program aims to make people more accepting and accommodating to those with disabilities. Two public service video ads will be aired this year promoting the idea that disabilities should not be a determining factor in interpersonal relations.

Although the Accessible Environment ads are new, public service campaigns against smoking, drinking and unsafe sex have been in place for several years.

Anti-smoking and drinking ads sometimes feature computer simulations of processes within the human body, and these are extremely informative and well made, but they tend to be less effective than other types of advertising. It has long been clear that if people were truly frightened by the thought of potential diseases and even death, there would be no smokers or alcoholics.

Ads that play on emotions provoke a more intense response, especially if they feature children.

The anti-smoking ad “Childish Excuses” is one of the most persuasive of this type. The ad features children reciting the excuses adults give when trying to explain why they don’t quit smoking.

Ads that incorporate humor are also often successful. One current favorite is the anti-alcohol ad featuring a feral squirrel saying: “Boozing again? Then I’m coming for you!” In Russian, the word squirrel is similar to the slang term  “the shakes.”

Campaigns against smoking have a reputation for being the most lively and creative. The ad “I’ve Quit Smoking” encourages everyone to quit and dance for joy, as dancing is freedom. Also, smokers “don’t dance.”

Another funny ad features people who have quit smoking singing funny songs about it.

However, the most popular and funny anti-smoking campaign run by the Ministry of Health and Social Development is the Dolbak Horse, a character that appears in both video ads and real life.

Dolbak is a stuffed horse that speaks alternately in female and male voices, has hands and moves around. Making itself a real nuisance, it literally annoys people to the point of throwing away their cigarettes. Dolbak also appears sometimes on the street, although RIA Novosti recently reported that in once case, Dolbak was able to convince only 10 smokers to throw away their cigarettes within the space of one hour.

Nevertheless, a website featuring the character, Pozovidolbaka.ru (“Call Dolbak”) is in development, and after it is launched, anyone will be able put in a request for the horse to come to their office or home to visit to smoker friends or colleagues.

Ads that address HIV and AIDS are a separate category. They have to be both informative and play on emotions.

Some of these ads try to tell viewers to be kind to those who are HIV positive.

The AIDS-meter, a device that could supposedly determine an individuals’ risk of contracting AIDS, was highly popular on the Internet for a time. According to the Ministry for Health and Social Development, traffic to the website http://hochuspidometr.ru (I want an AIDS-meter) exceeded 200,000 visitors in only 10 days. Nearly 7,000 people expressed an interested in buying the gadget, but the website revealed that the AIDS-meter was really just common sense.

According to the Ministry for Health and Social Development, traffic to the website http://hochuspidometr.ru (I want an AIDS-meter) exceeded 200,000 visitors in only 10 days. Nearly 7,000 people expressed an interested in buying the gadget, but the website revealed that the AIDS-meter was really just common sense.