Alexei Goncharov: “A man knows where he wants to go, and he walks alone” 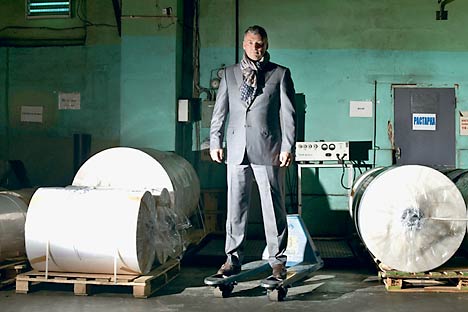 Alexei Goncharov is a man who has made his own way. Now the owner of Uralplastik-N, he has spent a lot of time and effort over the years in R&D, which is almost unheard for a small businessman in Russia.

A man builds his own factory in the suburbs of Yekaterinburg to produce polymer film. The plant employs cutting-edge technology and the latest in modern logistics systems. This man is not one to take short cuts.

Before this, he had been in adhesives, worked in metallurgical waste recycling and held jobs as a tailor and as a trader. The man in question has had to adapt his commercial projects to a changing reality to come out on top in various adverse situations, and this has shaped the way he is today.

This man is Alexei Goncharov, owner of a chain of factories, and possessor of a quality that is rarely seen in Russia – entrepreneurial spirit. Goncharov spent a day with Russky Reporter’s Alexei Torgashev talking about his life, his career and his plans for the future.

“When I first started, I literally had nothing. My first project was textiles. You name it, we made it: clothes, curtains, anything. At first I had people working from home, then I got a studio, and when the business took off, we opened big tailoring factories. We sold what we made wherever we could, at the market, from the back of cars, or in shops. This was all back in 1990-1991.

“In the early nineties there were plenty of people who could make things, but hardly anyone knew how to sell their goods. At the same time, people were hungry for new goods, and I could see what would work. Whatever you were selling at this time, the minimum profit you’d make would be about 150 percent; a few times we even made 1,000 percent.

“So, how did it happen? You’re there having a cup of tea with someone, and he says: ‘There’s quite an interesting opportunity here. The difficulty is getting hold of this kind of material. But if we could work it out we’d be looking at 500 percent net.’ You have to line up for an hour to get the material, and the fabric producer has a monopoly on this business and is a pretty sketchy character to boot. But I came up with a solution whereby we got the material, and no money even changed hands.

“If you’re an entrepreneur, you can make money out of thin air, but you have to be able to think through a million different risks and outcome. I have come all this way on my own, no one helped me to get where I am today.

“We saw a niche in the market and we filled it – we decided to go into packaging. Uralplastik is an old factory. I bought out its shares. Buying the factory was not a decision I took lightly; it involved huge risk. But if I hadn’t taken the plunge and bought it, you would never have heard of me today. Of course I wasn’t alone in this; I had a lot of professional assistance in the form of lawyers, a PR team and securities specialists. When you’re working on a big scale like this, it’s a matter of your people being more on the ball than the people they are negotiating with.

“I became the owner of Uralplastik, and we revamped the Japanese production line that had been installed back in perestroika. We bought new equipment with our own money and loans from people we knew. This was because the interest rates on loans in the late 1990s, early 2000s were stupidly high, and building a production business on borrowed money would have been pretty much out of the question. Actually the situation today (with rates of 10 to 18 percent) is not much better. This is perhaps why the Russian market is dominated by big conglomerates and small and medium-sized businesses, the ones that generally require new equipment, are fairly thin on the ground.

“The main philosophy of production should be as follows: Production should happen without people. People should only be employed to provide a service: to give training, do repairs, work in shops and restaurants, to apply their knowledge in some direction, trade, build – in short everything that most of the world’s population do to earn a living. If we want to see a lot of cheap, high-quality goods on our shelves, the production process needs to be automated and operate without people. In turn this would create a lot of jobs in the service sector.

“But at the moment the situation in Russia is completely the opposite. With the factory I am building at the moment, for example, I can’t buy anything here in Russia, everything needs to be imported from abroad, and there are no trustworthy contractors here either, it’s hard to find one that gets it right the first time.

“It’s easy to forget that Russia is not Europe – you introduce new technology, only to find that the market is still not ready for it. People in Russia have very conservative tastes, and producers are wary of introducing new, better-quality goods to the market. Of course everything catches on in time, but in general we are still about 10 years behind the West, and this is simply because it takes longer for the Russian consumer to accept new products. In my opinion, this is an area where the government could step in and educate people.

Competition in Russia is hindered by a somewhat sheep-like attitude toward business. No one is thinking up new ideas, people just look out for what seems to be doing well and follow suit. As soon as we launched our factory, copycat businesses started cropping up everywhere and before long there were six factories like ours nearby.

“I think that the birth of Rosnano [a state-controlled company dealing with nanotechnology] represents a desperate attempt ‘to do something, anything!’ The idea itself is very good – to bring all of Russia’s scientific and technological talent out into the open. As an institution, Rosnano is quite tight-fisted – it’s not easy to take out a loan, but this is one of a few genuine opportunities for small- and medium-sized businesses to get funding for high-tech projects. The project we are doing required overall investments of 2.3 billion rubles ($73 million). It was only thanks to Rosnano that we could attract credit like this. And it’s important that this money is primarily intended for small and medium-sized businesses.

“The rules and regulations of Russian customs offices are the main obstacle to the development of Russian business. They may have introduced 0 percent import rates for foreign equipment, but the rules are set out so that foreign companies have to spend two months doing paperwork to be able to supply me with equipment.

“Most raw materials used in industry are imported from abroad. But at the same time, this raw material has huge stamp duties placed on it. So in most cases it works out a lot cheaper to import prepared goods.

“We need to change the way we think. The young people we hire have often lost faith in the system, complaining at how much these bureaucrats seem to earn.

“I am a businessman and a global citizen. I don’t feel attached to any particular place, and I live where I work. My time off is spent on a motorbike, playing golf or skiing. I have a Honda and a Harley, both of which I treasure. I’ve been pretty much everywhere in the world, sometimes in company, sometimes on my own.

“Being abroad makes me see Russia more objectively. In Africa, for example, I discovered that Africans have a lot in common with Russians: Both would like to live without having to work. But I still think about the fate of Russia. And I have decided that it is to always be on the sidelines. As soon as we start to move forward, someone always comes along and pulls us back to a standstill. And now we have the chance to overcome these obstacles and make headway on the path of development. This is going to take a lot of effort, but in reality, this is because the Russian market is still a void.

“This article is abridged from the original version, which appeared in the Russky Reporter magazine.