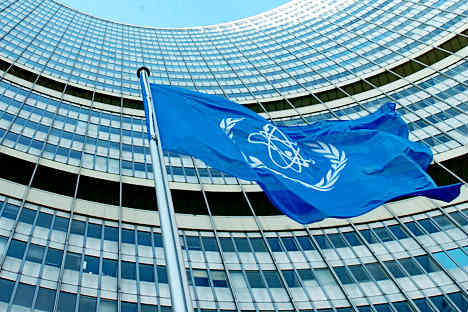 Iran has issued an invitation to IAEA inspectors to visit the country, the first such move since the agency published its report on the status of Iran's nuclear program in November. It is difficult to say what will happen next, especially since the international community is split into two opposing camps on this issue. This article will analyze both of them, also taking into account the situation in Tehran.

The West and Israel believe that the Iranian leadership long ago set itself the goal of building nuclear weapons, and so are calling for harsh, crippling sanctions, including an embargo on Iranian oil exports (Iran’s natural gas production is limited) and bank transactions (primarily by its Central Bank), while refusing to take off the table a potential strike on Iran’s nuclear facilities if it continues with its nuclear weapons program.

That scenario might be left to Israel to implement, sparking a regional war with unpredictable consequences.

NATO air strike on a Pakistani

Moscow optimizes its military grouping in the south

There is by no means consensus on harsh sanctions against Iran. For example, India, Japan and South Korea need to buy Iranian oil, and Greece does not support the idea of sanctions either, preventing their approval in the EU.

The worst element is Israel’s readiness to strike Iran’s nuclear facilities, action that even Washington does not support.

Advocates of the other view, in particular Russia, maintain that Iran’s authorities have not yet fully settled on a course of building nuclear weapons. However, they are worried by Iran’s efforts to create a complete closed nuclear fuel cycle, including uranium enrichment and the extraction of plutonium from nuclear fuel waste.

But a closed nuclear fuel project does not seem economically viable because Iran only has one nuclear reactor, at Bushehr, which Russia is willing to supply with nuclear fuel for as long as it is operational. The other nuclear facilities, such as a 360 MW light-water reactor at Darkhovin, in the southeastern province of Khuzestan, are more for show than actual delivery.

Furthermore, research reactors do not need large amounts of fuel. For example, the Tehran Nuclear Research Center’s research reactor, which has a nominal capacity of 5 MW, has spent only 100 kg of low-enriched nuclear fuel (less than 20% of Uranium 235) in the past 20 years.

However, a closed nuclear fuel cycle carries a certain risk in that it provides the research and technological prerequisites for creating uranium- or plutonium-based nuclear weapons. If the international community sits on its hands, gaining nuclear-power status will become a purely political matter for Iran.

North Korea proved that this is a very real possibility: it withdrew from the Non-Proliferation Treaty and subsequently held nuclear tests in October 2006 and May 2009.

Most Russian experts advocate continued interaction between Iran and the International Atomic Energy Agency (IAEA), arguing that this could keep Iran’s nuclear program peaceful. Tehran obviously shares this view, which is why it has admitted IAEA inspectors to its nuclear facilities. However, the level of technical cooperation between the IAEA and Iran has been falling, as the termination of most of their 55 joint projects indicates.

Tehran’s view of the issue

Iran views its nuclear program as a source of national pride, seeing its continuation as imperative and as a pathway to pushing technological development forward. This is why attempts by the United States and its allies to limit the development of Tehran’s uranium or plutonium programs are branded hostile in Tehran.

The country’s ruling conservative and neo-conservative forces (the opposition has barely 15% of the vote in Iran), which are preparing for parliamentary elections in March 15, 2012, cannot accept a compromise for fear of being accused of treason. This situation is unlikely to change until the presidential elections in 2013.

Few in the West know that the numerous sanctions against Iran that are currently in place have had no effect whatsoever on large Iranian companies, which evade them with ease, thanks to state assistance.

Instead, the blow has hit small and midsized exporters that have no connection to the Iranian Revolutionary Guard or the country’s nuclear or missile programs, as well as ordinary people, who blame their worsening economic condition on the United States and its closest allies – Britain and Israel. One of the consequences of this is that the opposition is increasingly losing influence.

Iranians take a particular view of the idea of a military solution to the nuclear issue. They believe it is unlikely because of their country’s sizable military potential and close ties with Hezbollah, Наmas and Islamic Jihad.

At the same time, they disregard the fact that Iran’s main ally in the Middle East, Syria, has weakened and that many Hamas members have fled, or that Saudi Arabia and Qatar’s influence over the Palestinians is on the rise. Furthermore, Egypt’s military authorities have all but refused to restore diplomatic relations with Iran, and there are many other elements constraining the Iranian authorities’ regional ambitions.

Achievements in the development of Iran’s armed forces, in particular in missile construction, have led the country to overestimate its combat capability. In fact, its military forces are not even ready for a military confrontation with Israel, which is technologically superior to Iran, and so it would be unreasonable for Iran to willingly aggravate problems in relations with Israel or worse still, with the United States.

On the other hand, the Iranians are not put off by the possibility of hostilities. Since most of them are Shias who have for centuries lived surrounded by enemies, they are prepared for any turn of events. They will not be cowed, and it is very difficult to buy them, which means that the international community should seek a compromise. This will prove elusive, but it is the only way to resolve Iran’s nuclear issue.

Vladimir Yevseyev is director of the Center for Social and Political Research.