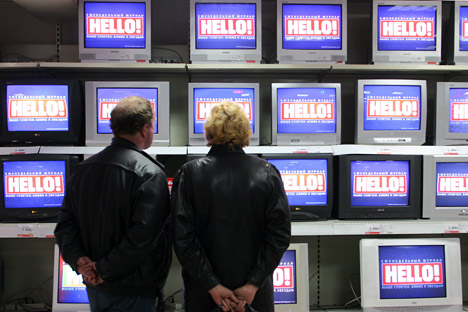 According to experts, Russians spend more money on non-food items which results from the lack of confidence in the stability of currency rates. Source: ITAR-TASS

Russian purchases of non-food items have increased as a proportion of personal spending. Is it a sign that Russia is maturing into a modern consumer society?

A study released in October by the Russian analytical and polling agency Romir revealed that in September, Russians spent 1.5 percent less on day-to-day necessities than the month before.

What are Russians choosing not to buy? According to data from the state statistics service Rosstat, the answer is food. But this may not indicate that Russians are going without food because they can’t afford it – rather, it is more likely that Russian consumers are taking a more Western approach to purchases, spending less on food and more on goods and services.

Middle Class: What Russia can learn from India

The proportion of spending on food decreased throughout the 2000s, and during the prosperous years from 2004-2007, spending on food fell by a record nine points, from 43 percent to 34 percent of total Russian household spending. The share of spending on goods and services in the same period increased by five points, to 40 percent of total spending. But unlike the 2000s, which featured two-digit annual growth in nominal incomes and the increase in real incomes often exceeded 10 percent, today real personal incomes are currently almost stagnant, and are even decreasing in some industries and regions, according to Rosstat.

The luxury of disregarding the price of food has long been considered almost a benchmark characteristic of the Russian middle class. According to Rosstat, in 2010, the poorest income group spent 54 percent of their monthly budget on food, and 23 percent on goods and services. This group had an average monthly per capita budget of 3,200 rubles ($110). In the wealthiest income group, the proportion of spending on food was only half that, at 26 percent, assuming an average monthly budget of 25,700 rubles ($835). This group’s spending on non-food items made up 53 percent of their overall consumption.

Yet, even in the poorest groups, the share of spending on goods and services, including consumer durables, has been growing. Between 2008 and 2011, despite the economic crisis, spending on durable goods increased by 4 points – to 23 percent from 19 percent.

“Acquisition of non-food items in the past few months has been due to lack of confidence in the stability of currency rates,” said Igor Polyakov. This consumption spiral was made possible, however, by a reduction in the savings or by taking out loans.

“Crisis expectations had their effect, as is evident from the faster growth in the non-food retail segment: people have been buying electronics and cars to hedge against ruble devaluation,” said Alexander Golovtsov. “This factor will be less long-term than market saturation. The pre-election social payments may stabilize demand as early as the year-end.”