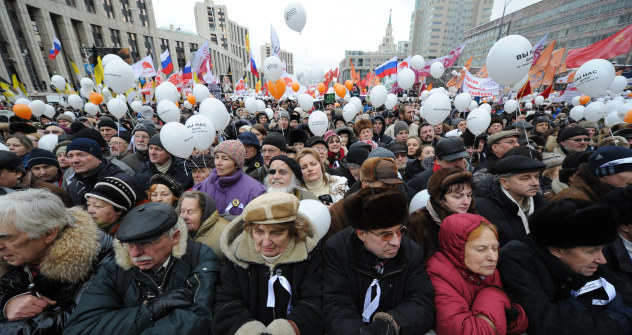 Saturday's rally is reported to bring together much more protesters than previous ones. Source: ITAR-TASS

Thousands rally in Moscow to demand that the results of the 2011 State Duma elections be cancelled and Vladimir Churov, head of Central Election Commission, be dismissed.

The Dec. 24 demonstration on Academic Sakharov Prospect in Moscow showed that the number of Russians interested in participating in civil society is growing – and that they are growing more frustrated with the actions of the authorities.

Faces of the protests. View gallery

The day before the officially sanctioned protest, the country’s social networking sites and blogs were overwhelmed with comments about the upcoming demonstration. More than 60,000 Internet users indicated an interest in participating in the civil action to support “fair elections.”

The number of people who actually attended was up for debate. Official figures numbered the protestors at 29,000 while organizers claimed that 120,000 came out to listen to such prominent opposition figures as former Finance Minister Alexei Kudrin, presidential candidate and billionaire Mikhail Prokhorov, opposition politician and co-funder of the People’s Freedom Party Boris Nemtsov, anti-corruption campaigner and blogger Alexei Navalny,  and TV host Ksenia Sobchak.

Some officials doubted that the protest site could hold 120,000 people, but prominent blogger and independent observer Alexei Morozov who attended the demonstration said that the figure was accurate.

Although the actual number of attendees may never be known, it was clear that these protests attracted more people than the previous ones on Dec. 5-7. Yet despite the crowds, the demonstrations were peaceful, and there were no arrests. Some participants argued that the rally was so calm because the attendees were a mix of journalists, professors, students, musicians and businessmen. Others attributed the lack of violence to the fact that the protest area was extremely overcrowded and it was tremendously difficult to get through the crowd.

“It was the first time in my life I saw such a big crowd,” said Yuliya Barsukova, a student at Princeton University who was in Moscow for winter break. “I wish I could have participated in the previous protests in Bolotnaya Square, but I was in America,” she said. Barsukova read about the previous protests in both Russian and American newspapers and felt that she had missed witnessing an important event. “I couldn’t even participate in the protests, held in some American cities – in Boston and in New York,” she added. “I really wanted to supports fair elections as a citizen of Russia. And when I heard about the upcoming demonstration, I jumped at opportunity to participate in it.”

When asked about the protests, she said she “was very glad to see so many well-educated and intelligent people who expressed their positions. Some nationalists tried to make some provocations, but they failed and had their slogans lost in the crowd.”

Saturday’s protests proved that more Russians express their discontent with the authorities and vote fraud.

“The fact that Alexei Kudrin, Mikhail Prokhorov and even Ksenia Sobchak attended the meetings really does matter,” said political blogger Morozov. “It means that public indignation reached its peak and developed into something more. No matter what political views people may share, they are united in their negative attitude to Vladimir Putin’s attempts to run for the Russian presidency for the third time. And they see Putin’s re-elections as unacceptable. It seems to be an obvious fact, I think.”