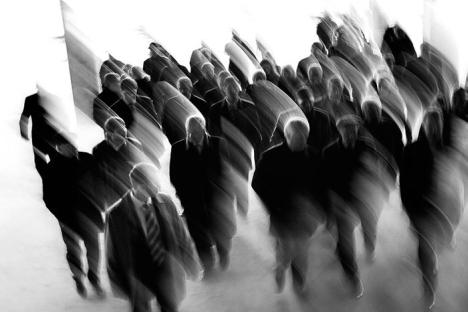 Government experts admit that the country has far too many bureaucrats and maintaining them is taking up more resources every year. They propose that government staff should be cut by 30 percent, while those who keep their posts should be strongly encouraged to perform well.

Over the last decade, the number of Russian government bureaucrats at all levels has increased 140 percent – from 1.16 million in 2000 to 1.65 million at the end of 2010. These figures come from a final report submitted to the government on proposed adjustments to the country’s long-term development strategy through 2020. Ironically, the number of state servants continues to grow even as the overall population declines. In 2010, there were 1,153 government officials for every 100,000 Russians, whereas 10 years ago there were 794. Currently, 25 of every 1,000 employed Russians work for government agencies. In 2000, this number was 18 out of 1,000, up from 15 per 1,000 in 1994.

According to the authors of the report, government officials hinder the country’s economic growth because many of their duties are redundant. Paying for these bureaucrats also limits the amount Russian could spend on other things: 67 billion rubles ($2.1 billion) is allocated in budgets at all levels each month to pay salaries of government workers. If the number of government officials was reduced, or even returned to 2000 levels, the country’s economy could save about 240 billion ($7.7 billion) annually. Andrei Klimenko, director of the Public Administration and Municipal Management Institute at the Higher School of Economics, thinks the real number could actually be double that if budgetary spending on facilities rental, transportation, telecommunications and other expenses are taken into account.

Government experts suggest that reducing the number of officials by 30 percent and spending half of the funds saved to increase the salaries of those who keep their positions would result in a net gain of 120 billion rubles ($3.8 billion) by 2020.

The savings could also be used to introduce a financial incentive system to improve the productivity of the remaining state officials. According to estimates by Yevgeny Mironov, deputy head of the Development Center at the Higher School of Economics, government officials’ labor productivity has fallen approximately 20 percent over the last 10 years.

Some bureaucrats reject that assertion. “We often work nights and Saturdays, so how can one possibly think we have low productivity rates?” said an economic agency employee who preferred not to be identified. Unfortunately, official meetings consume a great deal of this time. The economic agency employee noted that one two-hour meeting with the prime minister can take up to two days: It is not unusual for meeting participants first have to fly somewhere to meet him and then wait idly for several hours, since no meetings start on time.

An official from the Ministry of Economic Development pointed out that the government has tried to reduce the number of bureaucrats twice since 2000. In the early 2000s, the move failed because the administrative reform of 2004 caused the number of government officials to increase. The latest attempt was made in 2010, when the Ministry of Finance put forward an initiative to fire 20 percent of federal agency employees. The move would have saved 43.4 billion rubles ($1.4 billion), but as of now, no significant reduction has been achieved, according to a government source. According to the source, ministries and state agencies have only eliminated fictitious positions occupied by retired employees.

Policies pursued under Vladimir Putin have resulted in a dramatic expansion of the government bureaucracy over the last 10 years, according to political analyst Mikhail Vinogradov. But Andrei Klimenko thinks that Russia is not unique in this regard, since government staff expenses are the rise in a number of countries today. However, in Klimenko’s opinion, what makes Russia different is the amount of attention the public pays to these matters. “This is a political issue. That’s why there are regular bureaucratic purges. Both the United States and France have been through this,” he said.