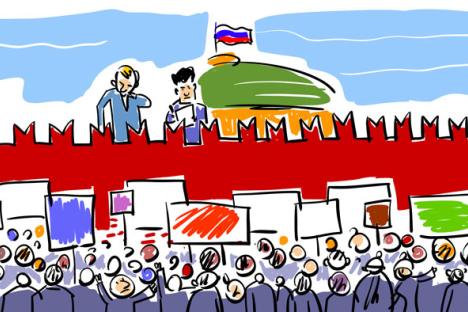 Public dissatisfaction with the authorities’ actions is growing, but it will not result in revolution.

The recent post-election protests against voter fraud have inspired not only protesters, but also the media both in Russia and abroad. Some journalists have started writing about the possibility and even the “inevitability” of the replacement of the Russian authorities.

Maybe journalists were inspired by the words of blogger Alexei Navalny, one of the leaders of the protest movement, who said he had seen in the streets on Dec. 24 “enough people to occupy the Kremlin and the Russian White House." But he promised not to encourage them to do it.

Will a revolution happen in Russia? And if so, what kind of political system could replace the current one?

Let’s hope that there will be no revolution. The majority of the protesters are not so decisive like Navalny. For instance, during the protests, one of the most vocal members of the opposition – former chess player Garry Kasparov -  said that rather than overthrowing the government, a better plan would be to “repair the Putin regime.” Meanwhile, Konstantin Kosyakin from the radical Left Front demanded an announce all-Russia strike and a movement to block the highways. But he didn't get much support from the protesters.

There is no leader of modern Russia's discontented masses, and there can’t be one because of the differences between opposition groups.  “We’re holding different flags,” said Kasparov at the protests.

Russians agree with the rally participants in their indignation against vote fraud but don’t support their radical slogans, according to a poll conducted by Public Opinion Fund. 36 percent of respondents know about the recent rallies, 29 percent are slightly familiar with it. 52 percent see the Dec. 10 protests on Bolotnaya Square as very important in Russia’s politics. Yet 13 percent expect positive consequences of the demonstrations while 48 percent put this possibility into question. In addition, Russians don’t support radical requirements to cancel the results o the elections. 40 percent of respondents are against conducting new elections in the State Duma and only 26 percent support this idea.

All those vying to attract the attention of the protestors have different approaches for solving the political problems of the country. For example, former finance minister Alexei Kudrin proposed "dialogue with the authorities,” but this proposal was met by shouts of “Shame!”

Businessman and billionaire Mikhail Prokhorov was also not taken seriously by the majority at the protest. His appearance prompted cries of “Go back to Courchevel!” in reference to his playboy days and a sex scandal at the French ski resort in 2007 that damaged his reputation. Prokohorov went on with his planned comments, saying: “There are many merry, civilized people who are happy because of the fact that they came together to the square,” and completely failing to establish a dialogue with the protestors.

Neither Prokhorov nor any other liberal or pro-western politicians have had much public support in Russia. And the Dec. 4 State Duma elections proved it once again. Even if we assume that the results were falsified, the falsifications did not affect only the Yabloko party - the only liberal democratic  political force participating in the elections.

The political situation points to the major problems with Russia’s opposition - the people are concerned with their own dissatisfaction rather than supporting an individual politician. And this situation doesn’t necessarily mean that Russia has a lack of civil society or other signs of modern democracy. The election results confirmed the fact that Russian’s modern opposition will follow the communist model of building a social welfare society if it comes to power. And this process will be based on a national idea, which at best will mean attempts to restore the Soviet Union as the communists manifested in their program documents. At worst, opposition groups will embrace Russian ethnic nationalism in the model of the Liberal-Democratic Party of Russia.

Liberal activists deserve much respect for their attempts to democratize Russia. But it is communists and nationalists who will enjoy the results of such attempts, not those who want fair elections and civil freedoms. I don’t want to participate in such a revolution.