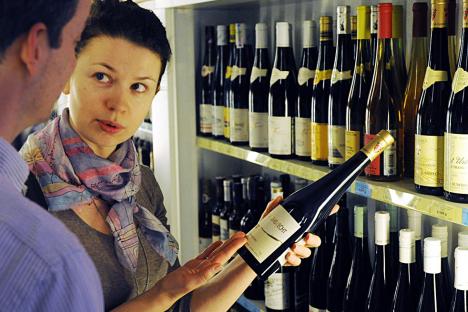 Finding good wine at a reasonable price in Russia is like finding a needle in a haystack, while limited growth in demand, new alcohol consumption rules and even the changing winds of international politics have all complicated the import industry in recent years.

About 190 million liters of wine were imported in the first nine months of 2011, making up nearly one-third of the total market, and roughly equaling the amount imported for the same period last year.

There has been growth over the last decade, with foreign players expanding consumer options. Since 2001, Spain has increased its share of the import market from 1 percent to 15.2 percent while France has grown from 5.6 percent to be the current leader, with 21.9 percent. Most of the changes in market share, however, have come at the cost of Georgian and Moldovan imports which were banned in 2006.

Regardless of the country of origin, industry players say price is the largest stumbling block to increasing consumption.

“What you have here on the market is very cheap American wine,” said Sylvia Nestorov, an avid wine enthusiast who moved to Russia from California. “Then you have the very expensive and honestly not the best taste. And some of the good ones — but they have nothing in between.”

Disgusted with high prices and low quality, in August Nestorov began importing wines from Sonoma Valley to share with the local market through her business, Wines of California.

However, a low demand for wine discourages competition in an industry where vodka and beer dominate the market. According to a 2011 survey by RosBusinessConsulting, 60 percent of Russians drink beer, 49 percent drink vodka and only 26 percent drink wine.

“Low [average] monthly wages are another major hindrance to the growth of the wine industry,” said Vadim Drobiz, director of the Research Center for Federal and Regional Alcohol Markets. “Because of the differences in average wage, wine in Russia is, relatively, four to five times more expensive than in Europe.”

On average, boutiques and restaurants place a markup on price four times the cost, Nestorov said.

As a result of these factors, in the first nine months of this year beer sales reached 8.2 billion liters, vodka sales hit 1.1 billion liters while only 700 million liters of wine — both imported and domestic — were sold, which is down from about 840 million liters sold in the same period last year.

Forming a “culture” for consuming wine and alcoholic beverages and “establishing a tradition of civilized promotion and responsible consumption,” were the drivers for the Russian Chamber of Commerce and Industry to organize the first Moscow International Wine Expo at the end of October, said chamber vice president Georgy Petrov.

Over 40 companies from 11 countries took part in the event, including legendary British wine critic and Decanter editor Steven Spurrier.

It was an event welcomed by the industry, which was enduring a difficult year. In January, the Federal Alcohol Regulation Service ordered local alcoholic beverage manufacturers to undergo a safety check of their production standards, while at the same time many distributors were going through the license renewal process.

“The number of liquor and wine producers in Russia dropped by about 40 percent and distributors by about 50 percent in the past year and a half,” said Drobiz of the Research Center for Federal and Regional Alcohol Markets. “It has caused major problems in logistics for distributors, wholesalers and producers.”

Drobiz said the contraction is due to an “internal crisis” aimed at reducing competition by weeding out weaker players. “Government policies aim to make Russia a global player by reducing the number of producers and distributors,” he said. “Wine producers should … fight against this policy.”

The authorities have their own view of how the wine industry should develop.

“Throughout the entire world, the alcohol market is made up of [monopolies],” said Viktor Zvagelsky, a Duma deputy and chairman of the subcommittee on regulation of excisable goods, in an interview with Navigator-Kirov.ru.

“Even in countries where the government places much more focus on monopolistic practices, alcohol production is controlled by big business,” he said. “Small and medium businesses are not capable of producing high-quality alcohol.”

Industry experts do not agree, and emphasize the importance of small players in both making and dealing in wine. “It is important to have small, young importers,” Italian wine producer Giovanni Laconis told The Moscow Times. “I was in Britain, and there is a rising trend of 27- to 30-year-old guys with new ideas. Here big importers have a monopoly, and if you’re not a famous brand, it is hard to sell your product.”

New importers are also discouraged from entering the market because of the tediously long licensing process.

After sending in paperwork, recommendations and expert analyses, Mirko Lucio Furia, co-owner of Salva Terra, an Italian wine producer seeking to enter the market, said he would wait six to eight months just to receive a reply from the federal authorities.

Nestorov said it took her 2.5 years to obtain all of the necessary licensing paperwork.

“It is very bureaucratic,” she said. “If you don’t know the right people, it is very difficult — almost impossible to even become an importer.”

International producers are also feeling the effects of the local market turbulence. At an Italian wine show in Moscow this fall, Bertania marketing director Mateja Gravner said their previous Russian distributor had abruptly stopped placing orders without providing any explanation at all.

A new bill passed in July bans the sale of alcohol above 0.5 percent from 11 p.m. to 8 a.m. Currently beer is not considered an alcoholic beverage, but next summer the government is expected to redefine its status.

“The enactment [of the law] puts alcoholic beverages of different types at equal terms,” said Natalya Schenyaeva, communications manager at Diageo, a global alcohol producer of leading brands, including Smirnoff and Johnnie Walker.

However, the customs union with Belarus and Kazakhstan may extinguish these hopes.

“Currently 80 percent of the Belarussian beer market is packaged in plastic,” a source in the Belarus beer industry who requested to remain anonymous, told RosBusinessConsulting. “The new policy will force producers to invest an enormous sum to repackage their product into glass bottles.”

The Belarussian state committee on standards, the Tax Ministry and the brewers’ trade association support the development of a special category for beer, separate from wine.

Alcohol as a pawn

Foreign policy has also influenced imports. Early in October, Russia’s consumer protection chief Gennady Onishchenko hinted at lifting a ban on Georgian wines and mineral waters that had been in place since 2006 — following Georgia’s threats to thwart Russia’s WTO aspirations. At the time, Georgian and Moldovan wines had a combined 60 percent share of the imported wine market.

On Oct. 29, just days after Georgia and Russia came to an agreement on issues surrounding WTO accession, Onishchenko met with Georgy Piliyevy, the owner of the Georgian cognac producer Saradzhishvili in Moscow. Following the meeting, Onishchenko said, “We agreed on everything, and now are only waiting upon the presentation of documents,” Interfax reported.

Onishchenko also threatened to end imports of cognac from Moldova’s Transdnestr region last month, the day after the Kremlin made it clear it felt that the leader of the disputed region should not seek re-election.

Despite the obstacles facing the wine industry, foreign producers are still clamoring to enter the market. “Russians are ready and wanting to develop a wine culture,” said Mirko Lucio Furia, co-owner of Salva Terra, an Italian wine producer. “And I want to help open that world to them.”

First published at The Moscow Times.