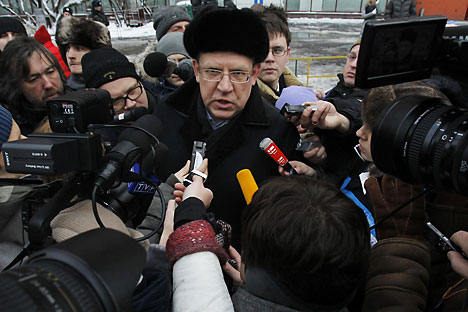 Alexei Kudrin wants progressive, pragmatic Russians to engage in dialogue with the authorities. Will it work?

Former Russian Finance Minister Alexei Kudrin has begun discussions on the creation of a new political party. The new party will be formed out of the remnants of the former Union of Right Forces (SPS), according to Boris Nadezhkin, who has left the Right Cause party to take part in the new organization. Kudrin himself, however, denied that any real plans had been made.

“I am not involved in any negotiations; I am holding consultations with a broad range of people but no agreements have been reached so far,” Kudrin said.

During his term as Finance Minister, Kudrin avoided political parties, but was never shy about expressing his views. Last February, speaking at the Krasnoyarsk Economic Forum about Russia’s upcoming election cycle, Kudrin said: “Society should learn to see the election as a review of the results achieved by the country’s leadership,” adding that the election should be “fair and honest, representing all leading political forces.”

Addressing the Dec. 24 demonstration for fair elections in Moscow, Kudrin urged the crowd to “organize a platform for dialogue,” including with the authorities. “Or else we will face a revolution, losing the chance we have today – a peaceful transformation and the confidence needed to create new authorities,” he said.

The mere fact that Kudrin, whom Vladimir Putin has called a friend, appeared at a rally where popular slogans included “Russia without Putin,” was seen by many as an important sign. This appearance along with the plans to set up a party is considered evidence that the political elite is looking for a way out of the political unrest that emerged following the Dec. 4 State Duma election.

In fact, Kudrin has simply expressed his desire to act as mediator in a dialogue between the authorities and those who have taken to the streets in support of the “non-systemic opposition,” according to Igor Yurgens, chairman of the Management Board of the Institute of Contemporary Development. Kudrin is trying to make a case for evolutionary, rather than revolutionary change. Yurgens believes that Kudring is trying to encourage pragmatic, progressive Russians to work with the authorities. This includes members of Russia’s growing middle class along with the elites who supported Dmitry Medvedev’s modernization agenda and counter on him serving a second term.

But Kudrin has not yet offered any clear vision for evolutionary change over the next few months. Addressing the protestors, he supported the demands for resignation of Central Election Commission Chairman Vladimir Churov and the idea of early parliamentary elections over the next six months, based on new rules and involving new parties. Yet he has not said anything about the presidential election in March, which Putin is widely expected to win. And focusing on the parliamentary vote is not helpful in trying to resolve the situation, according to political analyst Boris Makarenko. “While people came out in protest against the results of the parliamentary election, they were, in fact, protesting against Putin serving a third term,” Makarenko said. The invitation to dialogue announced by Kudrin means that the authorities are carrying on the tradition of taking only safe tactical steps. “In strategic terms, there are no options available so far,” Makarenko added.

Olga Kryshtanovskaya, head of the Centre for Elite Studies of the Sociology Institute of the Russian Academy of Sciences, believes that there are several options that could develop. While the scenario offered by Kudrin is orientated on giving power to liberals, there are also no small number of those who support more autocratic methods. And then there is the group of current political elites who hope that the passions of the electorate will cool over the upcoming winter holiday period and that Churov will keep his job, and the presidential election will be held on March 4 as planned.

But it is hard to imagine how the public will react if the March 4 elections “are held as before,” in the words of Kryshtanovskaya. She believes the only hope the elite has of remaining in power is to come up with real solutions – the sooner the better.