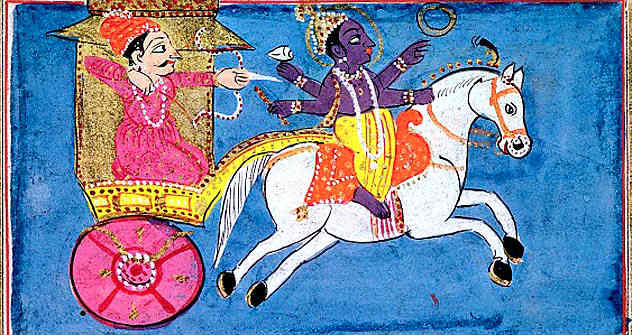 "The Gita is a source of wisdom and inspiration not only for the people of India but for Russia as well and the world."Source: PhotoXPress

There is a mystical connectivity between the souls of India and Russia. Sudheendra Kulkarni recalls Great Russian thinkers with their words of praise to The Bhagavad Gita Holy Book.

Alexander Kadakin, Russia’s envoy to India, has won the hearts of many Indians with his prompt and forthright response to the current controversy over the demand by a small Christian group in his country for a ban on the Bhagavad Gita. When a TV channel asked him if he was surprised by the outrage expressed by members of the Indian Parliament, Kadakin said, “I am not surprised at all. I think it’s quite correct that the Government of India has reacted in this way. Our two governments should not allow such things to happen. The Gita is a source of wisdom and inspiration not only for the people of India but for Russia as well and the world.” Calling Gita-baiters “mad men” with “vested interests”, he said, “I reiterate the love and the highest esteem our nation has for the Bhagavad Gita.”

Indian ambassador calls the Gita trail an “absurd, bordering on the bizarre”

As a devout Hindu and a secular Indian, I regard the intolerant stance of a fringe section of the Russian Orthodox Church as condemnable as that of some extremist Hindus in our own country seeking a ban on the Holy Quran. It’s heartening to read that Darul Uloom Deoband, an influential Islamic seminary, has also condemned the demand for a ban on the “Hindu holy scripture”. One hopes that the leaders of Muslim religious establishments in India express similar outrage against the virtual ban against the Gita and other non-Islamic scriptures in Saudi Arabia.

Tolstoy and Gandhi: Letters about Peace

The Gita controversy prompts me to revisit many inspiring moments in Russia’s long rendezvous with Hinduism, in the pre-Soviet, Soviet and post-Soviet eras. It’s necessary to do so because our leftist intellectuals, owing to their hatred for Hinduism, rarely mention this subject. The Gita was first brought to Astrakhan on the Volga by Indian merchants in 1615—nearly two centuries before it was translated in Europe. Peter the Great allowed them to build a Hindu temple and exempted them from all taxes. The best minds in Russia had a deep fascination for Hindu philosophy and eastern mysticism. This is best exemplified by two towering names in Russian art and literature—Leo Tolstoy and Nicholas Roerich. Tolstoy’s The Kingdom of God is Within You and his A Letter to a Hindoo had a transformative impact on Gandhiji when he was in South Africa. Gandhiji sent a copy of his Hind Swaraj to the rishi in Russia, who deeply appreciated its message as having “the greatest importance, not only for India but for the whole humanity.” Tolstoy had also read some works of Swami Vivekananda. Despite some differences on certain issues, which were largely due to the fact that all of Swamiji’s works were not yet available in Russian, Tolstoy described him as one of the greatest thinkers in world history, one whose philosophy is “profound on God, soul, man, unity of religions”. When a disciple of Swamiji sent him a book on the Gita, he wrote, “The metaphysical, religious idea of Krishna so well expounded in your book is the eternal and universal basis of all religions and all philosophical systems.”

The Tolstoy-Vivekananda-Gandhi link would be incomplete if we overlooked another great name—Romain Rolland. Though not a Russian—he was a Nobel laureate French writer and pacifist—Rolland’s brilliant books on Vivekananda, Ramakrishna Paramahans, Mahatma Gandhi and Tolstoy himself were widely read by the spiritually oriented sections of the Russian intelligentsia. One of Rolland’s admirers was Maxim Gorky, the revolutionary Russian writer, who called him “Russia’s Tolstoy”. Here is Gorky’s own appreciation of Hinduism: “These Hindus are indeed remarkable people. What refined thought!”

Coming to Roerich, one of the greatest painters and peace activists of the 20th century, it is a pity that educated Indians are generally unaware of the profound influence of the Hindu philosophy on his art. Few painters have captured on canvas the boundless spiritual splendor of the Himalayas as meditatively as Roerich, who made Kullu Valley in Himachal Pradesh his abode during the last twenty years of his life. One of my favourite Roerich paintings shows Krishna playing the tunes of eternity on his flute under a tree against the backdrop of the tranquil Himalayan peaks. Roerich’s writings on the need to protect mankind’s priceless heritage of arts and culture have an undiminished force of urgency even today. Incidentally, my own admiration for Ambassador Kadakin stems from his tireless efforts to protect Roerich’s—and his family’s—much-neglected heritage in India.

I have visited Roerich’s family estate near St Petersburg. It’s called Izwara, Russian for Ishwara. Because of the spiritual message of his art and activism, Roerich was largely ignored in official Russia during the communist era. The leader who honourably reinstated his name in Russian history was Mikhail Gorbachev. The architect of perestroika and glasnost had much interest in the teachings of Swami Vivekananda. He once invited the late Swami Lokeswarananada, a revered monk of the Ramakrishna Mission, for a conversation.

Helena Blavatsky, who co-founded the Theosophical Society, was deeply influenced by Hindu-Buddhist philosophies. The Theosophy movement, aimed at forming “a nucleus of the Universal Brotherhood of Humanity, without distinction of race, creed, sex, caste or colour”, made a significant contribution to India’s freedom struggle.

There is a mystical connectivity between the souls of India and Russia. Let’s strengthen it. Here is a suggestion to Hindu religious leaders: Hare Krishna temples in Russia are fine, but why don’t we facilitate the setting up of a befitting memorial to the Russian Orthodox Church in India as an initiative to carry forward the Hindu-Christian dialogue?

Originally published in The Indian Express