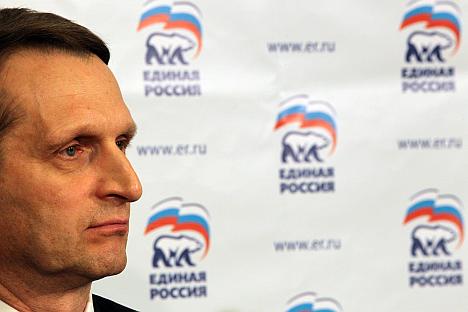 Sergei Naryshkin: "We should not see civilized protests as something awful". Source: Rossiyskaya Gazeta

Sergei Naryshkin has had a storied career in elite politics, but usually behind the scenes. Now he has moved from the Russian president’s chief of staff to speaker of the Duma. Anna Zakatnova and Tamara Shkel of Rossiyskaya Gazeta talked to the new speaker about his plans for the Duma and Russian political life.

Rossiyskaya Gazeta:What bills would you put in the first place on the Duma’s agenda? The president has already submitted two bills on modernizing Russia’s political system, and plans for other similar initiatives have been announced. Which of them will be included on Duma’s agenda as a priority?

Naryshkin: From the previous Duma, we have inherited a number of bills that were approved in the first or second reading. The new State Duma will begin with these.

Understandably, the most urgent bills are now ones concerning the development and improvement of the country’s political system. These are the initiatives voiced by Dmitry Medvedev in his address to the Federal Assembly. The relevant committees will start working on these documents as soon as they come to the Duma.

I know that the president and prime minister discussed those issues some time ago. Medvedev has already translated those ideas into a working group that prepared the draft address to the Federal Assembly. That committee was chaired by me President Medvedev’s chief of staff.

We began working on the draft at the end of June.

R.G.: Does this mean that those initiatives were not prompted by the street protests?

S.N.: No, not directly, altough what you call street protests reflect public sentiments, or at least some of them. And it is very useful for the country’s leadership to see those sentiments and react to them appropriately.

R.G.: Parliamentary opposition leaders have so far failed to agree among themselves on any joint actions or common position, yet they showed an obvious meeting of minds when voting to elect the Duma’s chairman. Why is this?

S.N.: I think this is due to the very fair distribution of duties and powers among the parliamentary factions. United Russia has 53 percent of the seats and the three opposition parties have 47 percent. At the same time, committee chairs were divided up 50.5 percent to 49.5 percent. So, there is some concession to the opposition here and I think it is a justified concession.

As for voting to elect the speaker, you could hardly expect a different result. I did not personally expect anything else. I am very grateful to my United Russia colleagues for their support and I respect the position of the opposition factions. It must have been they who voted against the candidate nominated by the majority party. It is normal for opposition members to vote “against” on such matters, just because they belong to the opposition. But I hope that, when it comes to discussing bills in the future, the opposition parties will not stick to the same logic of simply voting against the majority faction. I hope for substantive discussions and a constructive approach – especially given that there are many real professionals in the opposition factions who will certainly be able to assess the bills properly and vote accordingly.

R.G.: Is there a need for coalitions within the Duma? If yes, on what terms and for what purpose?

S.N.: A coalition is possible to ensure coordinated voting on bills relating to constitutional issues. The United Russia faction should and will look for partners for passing such resolutions. In other situations, there is simply no need for coalitions. Frankly speaking, United Russia has not received any proposals from other factions to create a steady coalition based on a coalition agreement.

R.G.: There has recently been another round of protests in Moscow and other major cities. Some support the election results, others protest against them, but what we see is people coming out on to the streets instead of appealing to their deputies. What can the new Duma do in this situation?

S.N.: We should not see civilized protests as something awful. This is a normal democratic process. Such demonstrations are a sign of the population’s growing self-awareness and the democratization of the society.

Over the past three-and-a-half years, both the president and the Duma have worked to change the political system. This is seen clearly from all of the president’s previous annual addresses to parliament. Yet it might be that changes in the public awareness and people’s minds are happening somewhat faster than changes introduced by the authorities into the political system. Protests show just that. It means the authorities should react accordingly.

R.G.: Do you support the proposal from Just Russia leader Sergei Mironov to review the election results?

Mr Naryshkin: No, I categorically disagree. More than 93 percent of Russians who took part in the voting supported the parties that now sit in the Duma. That is, the vast majority.

R.G.: Some pro-democratic politicians who did not make it into the Duma have already called it hostile towards the West. How should the speaker behave in such a chamber?

S.N.: The political landscape has, indeed, changed and the liberals are again not represented in the Duma, yet it would be incorrect to say that our deputies are hostile to anyone abroad. I am sure that the reaction by the country’s leadership, including the members of parliament, will be suited to the actions or statements concerning Russia that come from our foreign partners.