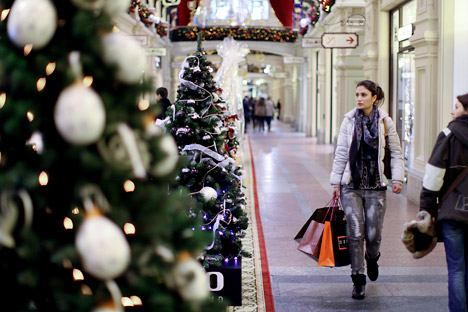 According to recent polls, Russians spend much more money to celebrate winter holidays regardless of the financial crisis. Source: Getty Images / Fotobank

Recent surveys on Christmas and New Year spending show the financial crisis has had little effect on Russians’ budgets this year.

While six out of 10 Europeans believe their economies are in recession, Russian consumers do not feel the financial crisis has hit their purchasing power, and most say they had more money to spend this year than last.

This was the finding of a Deloitte survey carried out on consumers in 18 countries, mostly European. Consumers in Greece, Portugal, Italy, Spain and France were more acutely aware of the downturn than others. While Russian consumers are not expecting an economic boom, 67 percent said their purchasing power had risen in 2011 and 40 percent expect a further increase in 2012.

European consumers plan to allocate an average budget of 587 euros (around $750) for the festivities this year, which is just 0.8pc lower than last year. Savings will primarily be made on gifts, while spending on holiday meals, entertainment and travel will largely remain stable.

Top of Russians’ wishlists for gifts is cash (56 percent), followed by travel (45 percent) and laptops or desktop computers (42 pecent). But their wishes may not be granted as people are becoming more discerning about what they buy as presents, with more choosing to buy useful and inexpensive gifts, such as cosmetics or perfume. At 87 percent, the share of Russian consumers preferring to buy useful presents was higher than last year’s 79 percent, putting them among the most rational shoppers in Europe. Only 34 percent of respondents said that price was relatively unimportant, down from a total of 41 pecent last year.

Russian consumers plan to spend more on holidays, up by 11pc on last year, while Ukraine and South Africa boast the highest increase – 18.3pc and 12.4pc respectively. But the survey authors said this must be seen in the context of rampant inflation in some countries.

According to a survey by Superjob.ru, a large Russian HR company, almost half of all working Russians plan to celebrate the New Year at home (47 percent) and only 4 percent will go abroad this year. The main reason for staying at home is that the New Year festival is seen as a time to be with family, but rising prices for New Year holidays are also a factor. Still, more Russians stayed at home last year (56 percent). But 11 percent of survey participants said they would be working over the New Year holidays, which last for nine days from January 1.

According to Maya Lomidze, executive director of the Association of Russian Tour Operators, the most popular foreign destinations for those going abroad in the New Year holidays are Thailand and Egypt, followed by France, Italy and Austria for skiing breaks, and other European countries for those who prefer cultural tourism – Germany, Spain and Italy are among the most popular.

According to Oleg Moseev, spokesman for the Russian Federal Agency for Tourism, holidaying in Russia remains popular with the locals, too. Of the 38 million people who went on holiday last year, only 12 million went abroad. The most popular places for cultural tourism in Russia are still the historic cities of the Golden Ring.