Celebrating the New Year at railroad 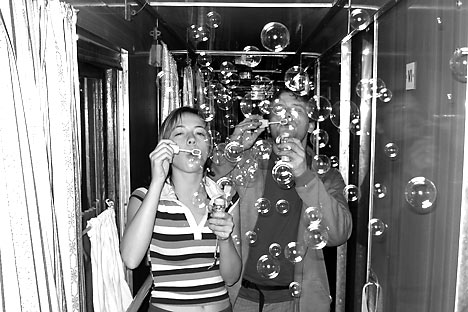 Alex Jude, an English teacher, translator and blogger living in Omsk, talks about his New Year experience in Russia. He happened to celebrate the New Year in a train heading to Caucasus.

It’s late December 2007 and I’m sitting on an old backpack in the cluttered hallway of a St. Petersburg apartment wondering why I’m being forced to sit on luggage. My girlfriend at the time reassuringly informs me it will bring us luck for the long journey south to her native Krasnodar and the Caucasus Mountains. Rolling my eyes under my winter hat, I wonder how someone with a Ph.D. in psychiatry can cling so tightly to village superstitions, but perhaps my five years in Russia have already taught me not to question Russian logic, so instead I ask when our taxi is due.

Several minutes later we are dodging our way past snowy potholes in the back of a rickety Lada en route to the bustling central train station with its usual eclectic cross section of Russian society. I’ve always been a fan of Russian railway stations and look around at the faces in the crowd as my girlfriend scours the departures board for our train to Moscow.

As usual, we’ve left everything until the last minute and so are having to travel first class rather than third class. We’re still murmuring complaints about the extortionate ticket prices as we board the train and clumsily shuffle our way along the corridor with our backpacks, skis, second-hand snowboard and proverbial kitchen sink.

Upon arrival at our compartment, the door slides back to reveal two bunk beds and a small folding table with a bowl of festive mandarins and two blue plastic bathroom kits, which I open to discover a mini toothbrush, tiny bar of soap, plastic comb, and best of all – a mini shoehorn. Russians tend to wear slippers on long distance trains and only put on their shoes to go outside or to the toilet. I presume many were overjoyed by the New Year gift of an exclusive Russian Railways shoehorn.

Our conductor on the train smiles through her clenched gold teeth every time she has to ask politely whether we would like a cup of tea. That’s when I realize we are definitely traveling first class. Usually, Russian carriage attendants have a reputation for being dour middle-aged women with dyed hair who are more like abductors (of passports) than conductors.

After a good night’s sleep, lulled by the rocking of the train, we arrive in packed central Moscow, drop our bags in the bag storage area and head across the street to buy my girlfriend some new shoes. Russian girls have a habit of putting beauty before practicality and insist on buying shoes that are at least three sizes too small. I’ve never heard of anyone trying to conquer Mt. Everest in high-heels but I’m sure Russian girls will be the first.

From the shoe shop in the underpass, it’s back to the station with a pair of $25 Belarussian boots. Then it’s downstairs to pick up our bags, back up to the noisy platforms and on to the next step of our journey. On New Year’s Eve we board the train to Nalchik – 35 hours and 800 miles to the south – equipped with our provisions of black bread, salami, biscuits, dubious multi-fruit drink and two first class shoehorns.

We spend several quiet and uneventful hours alone in our compartment before being joined by a middle-aged couple from the Moscow Region. Chatting with your neighbors on Russian trains is as unavoidable as drinking with them and, sure enough, it isn’t long before the jolly moustachioed husband is treating us to his favorite chanson tracks from his mobile phone and prying me with vodka, while his permed wife scolds him for his occasional lapses into bad language.

As New Year approaches, we hear the twang of a guitar and the sound of sporadic laughter coming from another compartment and decide to loiter in the corridor to listen. Soon the carriage is rocking to the familiar melodies of Kino and Mashina Vremeni, groups popular with guitarists and buskers across the former Soviet Union; from dingy apartment block stairwells to frosty urban underpasses.

In Russia, any party or celebration is like a centrifuge and sucks in anyone and everyone around it, regardless of whether they are acquainted with the other revelers or not. So it isn’t long before we are invited into the crowded compartment to join in the festivities with a Russian Railways tea cup of Sovietskoye Shampanskoye (cheap knock-off bubbly). I count two couples, several tipsy friends hanging from various bunks, and an improvised New Year’s tree on the table made from a pineapple with a bit of tinsel on top.

After some encouragement I’m persuaded to play some out-of-tune Beatles on an even-more-out-of-tune guitar and then it’s my turn to make a toast. Getting foreigners to make awkward toasts in broken Russian (when the only toast we have is “Cheers!”) is something of a tradition in Russia and one I’m not particularly fond of. I reluctantly stand up, almost hit my head on a pair of knees, take a deep breath and utter the only toast I know in Russia: “Vstretimsja pod stolom!” (To meeting under the table!). As predicted, it goes down well, as do the next few tea cups of Shampankoe, and then we’re into a round of Yolochka, the most famous Russian New Year’s song about a small fir-tree born in a forest.

Just before the clock strikes midnight, everyone is given a piece of paper and a pen and I’m told about the Russian tradition of making wishes at New Year. There’s the usual chanted countdown as we scribble wishes on slips of paper, burn them with a lighter and drop the ashes into our champagne tea cups. Then it’s down the hatch (ashes included!), hugs, kisses and congratulations as our little compartment on a train in the middle of nowhere welcomes in the New Year in unusual fashion.

Once the noise has died down, our host produces two small bottles of soap bubbles. “Instead of fireworks,” he says with a grin. We file out into the corridor and blow soap bubbles up and down the carriage to one last chorus of Yolochka.

Alex Jude is an English teacher, translator and blogger living in Omsk. You can read more about his thoughts on cultural and linguistic differences at www.englishinrussia.ru.