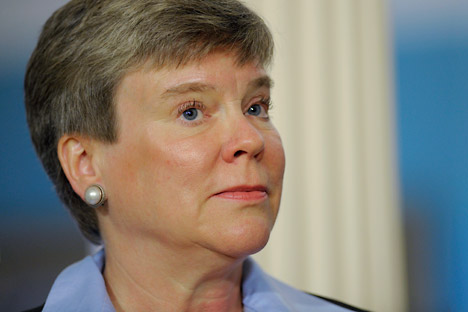 Rose Gottemoeller, the assistant secretary for arms control, verification and compliance at the Department of State. Source: AP

To mark the one-year anniversary of the START treaty, RBTH sat down with Rose Gottemoeller, the assistant secretary for arms control, verification and compliance at the Department of State. She was also the chief negotiator on START.

Gottemoeller called the treaty ratification an historic moment after a "difficult struggle" for President Barack Obama. She said that the result "was an important event in the political life in America." Under the new treaty, Russia has conducted 17 inspections, and the United States will perform its 17th inspection shortly (the agreement allows the parties to do 18 inspections a year - from February to February).

RBTH: Historically, the arms control process has been focused on Russia and the United States. Many experts suggest that the time has come to broaden the scope of this process and include other nuclear states. Do you see any prospects for engaging other countries in further rounds of arms control negotiations?

Rose Gottemoeller: Let me give a two-part answer to this question. Despite our 40 years of efforts to control and reduce nuclear arms…we still are the two greatest nuclear powers in the world. We still have over than 90 percent of nuclear weapons in the world between the two of us. So my view is that we still have some work to do together on reducing our nuclear arsenals further.

That said, in the context of the Non-Proliferation of Nuclear Weapons Treaty (NPT) review conference of May 2010, Russia and the United States did agree on an action plan with the other nuclear weapons states under the treaty--that is the United Kingdom, France and China--to get together and talk about verification and transparency technologies as well as military nuclear policy issues. And this effort has already begun.

I think this so-called “P-5” process will continue and will provide a very good venue for beginning to talk about this with other nuclear countries.  But in my view as far as reduction negotiations are concerned it still the United States and Russia that have, as I said, over 90 percent of the nuclear weapons in the world.

RBTH: Do you believe that disagreements on missile defense in Europe and Russia’s possible withdrawal from the START treaty could undermine the existing strategic stability?

Gottemoeller: I think it is useful for all of us to step back and to think about what has been accomplished since the end of Cold War. Now we have a very wide-ranging relationship with the Russian Federation that is positive on a number of fronts. The United States worked very hard with Russia and Georgia in past years to ensure that Russia enters the World Trade Organization (WTO). And that was accomplished last week.

On the military front we now work very closely together on the so-called  "Northern Distribution Network" and Russia is facilitating movement of NATO military materials to Afghanistan. And that is very important for the operation of the United States and NATO. In the same way we are now working extremely intensively on countering drug trafficking from Afghanistan through Eurasia and Russia into Europe.

Those kinds of cooperative efforts are very much to the benefit of Russian society.

So we have to step back and ask, why should we undermine each other’s security? I don’t buy the basic premise of this question because our relationship is so much different now and the Cold War is over.

I do understand that there have been a lot of concerns in Russia about the missile defense program and so-called European phased adaptive approach…. If there are some particular technical concerns, the U.S. view is that we have to sit down and figure out what these concerns are and through cooperation and transparency really try to assuage Russian concerns.

RBTH: Does it mean that the Obama administration isn’t ready to sign a legally binding agreement and give legal guarantees to the Russian government that the missile defense system in Europe will not be used as a Russian deterrent?

Gottemoeller: We’ve been very clear that do not believe that legal written guarantees are necessary. In fact, the important point here is to engage in cooperation. It is a pragmatic point that it is through real work together on this program we begin to understand what the benefits are for Russia and what our mutual benefit will be in cooperating in this way. And Russia’s technical concerns will be assuaged.

It is very pragmatic approach and we’ve been emphasizing this for months now and will continue to do so.

RBTH: U.S. Ambassador to Russia Michael McFaul, speaking at a hearing in the U.S. Senate, said that the missile shield in Europe will be implemented—with or without Russia. Don’t you think that this statement contradicts the agreement reached at the last NATO summit in Lisbon in terms of conducting joint assessments of missile threats before missile shield architecture will be created in Europe?

Gottemoeller: It is not how I understand the agreement made at the Lisbon summit. The summit in my view was a great step in NATO-Russia cooperation. The Russian leadership essentially agreed with NATO that it would be a good thing to cooperate on missile defense in Europe and in Eurasia against common challenges and common threats.

RBTH: Obviously Washington would like to start negotiations on sub-strategic arsenals and tactical nukes, but Russia is pretty much reluctant to discuss those issues right now and links progress on this to dialogue on missile defense. Does this linkage prevent headway on European security?

Gottemoeller: Russia has more conditions than that on the table. There are a number of factors that the Russian Federation wishes to see taken into account before embarking on new reduction negotiations. One does involve missile defense, the other involves progress on conventional arms control. There are other factors the Russian side has articulated involving the presence of NATO nuclear weapons in Europe.

But to be honest I believe as a negotiator that we all have to consider what’s in our security interest. And I was very pleased that we had some interesting, but informal at this point, discussions about conventional arms control.

RBTH: The new START treaty was ratified in the United States and Russia a year ago, which certainly was a great success for the leadership of both countries. The conventional wisdom in both Washington and Moscow is that 2012 will be a tough year for U.S.-Russian bilateral relations, primarily because of the presidential elections in both countries. Do you believe that 2012 may offer some new opportunities for Washington and Moscow?

Gottemoeller: I definitely see 2012 as the year of the opportunity. Partly because I remember 2008, the last time we had presidential elections in both Russia and the United States.

At the time I was living in Moscow and I was director of the Carnegie Moscow Center and I remember some very successful summit meetings that took place that year including the NATO-Russia summit in Bucharest and Sochi summit that year. So even in election years we can have successful and productive meetings.

We looking forward to 2012, which will be very important for us. It is President Obama’s hometown, Chicago, where we are going to have the G-8 summit and NATO summit. I think there are truly opportunities in 2012 and we shouldn’t be relaxing or waiting for 2013 to come, but should keep working.

I would like to wish a Merry Christmas and Happy New Year to all my friends in Moscow!