The fate of the region is in the hands of observers 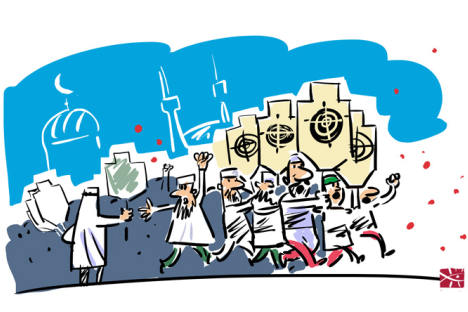 The UN Security Council’s reaction to the Syrian crisis will largely depend on the results of the observers’ work and their conclusions. It’s worth remembering that it was the position of the LAS that allowed the United States, Britain and France to pass the Security Council’s resolution that opened the way to military operations against the regime of Col. Muammar Gaddafi. So this current mission holds a unique responsibility.

“Our Syrian brothers are cooperating very well and without any restrictions so far,” Sudanese General Mohammed Ahmed Mustafa al-Dabi, who heads the monitoring group, told ITAR-TASS in Damascus. According to al-Dabi, the observers already in the country will be divided into several groups, which will head first to cities overtaken by unrest.

Syrian TV channel Dunya reported that the observers first went to Homs, which is located about 100 north of Damascus. There, leading world media and Arab television reported that the army and security forces continue to brutally suppress popular uprisings, while residential neighborhoods have been shelled with heavy artillery.

Syrian human rights activists, who have become the major sources of alternative information from zones of conflict between government forces and the opposition, claim that on just one day, the 26th of December, 59 people were killed in Homs at the hands of the military and police.

According to the UN, more than 5,000 people were killed in the first nine months of the ongoing conflict in Syria.

Damascus, on the other hand, has consistently stressed that there is no peaceful opposition within the country, but rather “armed criminal gangs” that are supported from the outside. Syrian authorities maintain that nearly half of the victims are law enforcement officers and military personnel.

“Homs is traditionally a stronghold of anti-government forces. And the most recent outbreak of violence there is clearly connected to the visit of Arab League observers,” said retired Lieutenant-General Gennady Yevstafyev, an expert on the Middle East and veteran of the Foreign Intelligence Service. “The goal is clear: to persuade public opinion, especially in the Arab world, that the civilian casualties have been caused by the actions of government forces.”

Mohammed Riad al-Shaqfa, the exiled leader of fundamentalist group the Muslim Brotherhood, announced that in Homs, “the regime has decided to kill everyone in order to silence the voice of freedom.” He said, “We call on Arab leaders to save the people of Syria.”

Observers note that the Islamist almost exactly echoed the words of a certain “LAS observer” by the name of Mahjoub broadcast on a number of satellite TV channels shortly before the visit of the major monitoring mission. Later, the League headquarters in Cairo categorically denied any affiliation between this person and the observers. Now the LAS observers will have to evaluate the situation.

Against this backdrop, Russia, with the support of BRICS states – China, Brazil, India and South Africa – continues to push for the adoption of a balanced resolution on the situation in Syria. Western countries have not yet agreed to the draft of the Russian resolution, which Russian Ambassador Vitaly Churkin presented to the UN. They object to the fact that a call for an end to violence is equally addressed to Damascus officials and the opposition. In addition, Washington, Paris and London are not happy with Moscow’s position, which rejects the imposition of an embargo on arms supplies to Syria.

Vitaly Churkin remarked that, “If we are asked to remove any mention of violence by the extremist opposition, we will not. If they expect us to introduce an arms embargo, we will also not do that. We know what such an embargo means. It means – as we saw in Libya – that you cannot supply weapons to the government, but someone else can supply weapons to various opposition groups.”

Obviously, if LAS observers confirm aggression and unjustified cruelty against the civilian population by the Assad regime, it will further aggravate the conflict at the UN on the issue of further actions against Syria.

However, unilateral support for the opposition without consideration of all the factors of the conflict may lead to far-reaching consequences. There is no doubt that a regime change and serious democratization await Syria in the future. And Bashar al-Assad seems to understand this himself. “That’s why he tried to establish a dialogue with the opposition,” Yevstafyev says. “The problem is that the opposition is rejecting the dialogue.”

“The opposition in Syria consists mainly of followers of Sunni Islam and accordingly is supported by fellow Sunnis from influential Persian Gulf monarchies,” Yevstafyev said. According to him, the collapse of the Assad regime could lead to a split in the multi-religious country. In addition, it would intensify the isolation of neighboring Iran, for which Bashar al-Assad was the only ally in the region. And in this scenario, the fate of Lebanon, which has historically been dependent on Syria, looks rather nebulous.

The redrawing of borders in the Middle East looms on the horizon, increasing the instability of this volatile region.