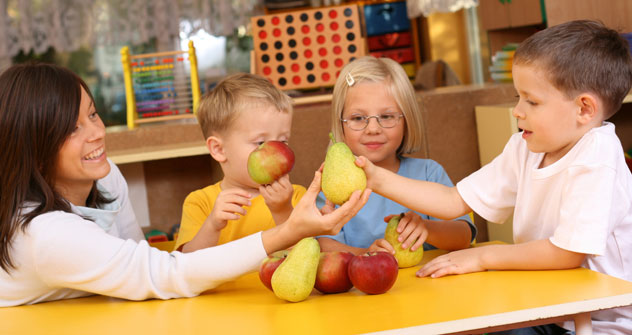 Some kids can't put up with the meat and their parents send them to vegetarian preschools. Source: PhotoXPress

Only a few years ago, school founder and director Tina Trusova worked at a Moscow publishing house and was bringing up her three children on typical meals like borshch and roast beef. Today she is a devout vegetarian.

“I haven’t eaten meat or fish for six years. And since last summer, I have been more and more into eating raw food. My husband and children cook their own food; they do not share my ideas about eating.” But Trusova’s students, who are between two and four years old, are embracing the raw food philosophy.

Private preschools are becoming more and more common in modern Russia. They usually begin like this: A woman rents a three-room apartment and recruits students from among her neighbors either because there are no places available at the local public preschool or because the private school promotes particular values that parents find appealing. Many vegetarian parents would rather take their kids on the metro to Tina-Sad rather than allow their children attend a local preschool that serves meatballs for lunch.

“A vegetarian kindergarten is not such a lucrative enterprise,” said Trusova. “It would be easier if I took a more relaxed attitude to the menu. But, first, I cannot change my ways, because I hate cooking meat; I detest it. And second, I feel that I am implementing a good project. I am teaching kids good nutrition habits, they are never sick and, in general, a cold is something unknown to us here. It is all thanks to the food that they eat. Having said that, it is not easy to produce a balanced menu. For instance, instead of animal fat I give the kids almond milk. I make green cocktails by rubbing together coriander, parsley and green salad, add bananas, and the children love it. For sweets, I give them couched wheat grains mixed with dogberries and make patties, which I then put in the fridge for a few hours. The result is wonderful patties.”

It is hard to say whether the children are happy with this diet. Some of them have a vocabulary consisting of only two words – “mama” and “yes” – so it is difficult to get any coherent thoughts from them. “They eat what they are given,” Tina said. “And of course I know everybody’s likes and dislikes. It’s a small group.”

One little boy who attends Tina-Sad has parents who are not vegetarians.

“I pray to God that he will start eating meat. So far he hasn’t,” said his mother. “We thought that after being on a lean diet at the preschool, he would ask for meat at home. So far, he hasn’t. He still spits it out.” Maybe the boy is a born vegetarian.

Dmitry Glukharev, a 23-year-old Muscovite, believes he was born a vegetarian. He thinks that perhaps his father, who didn’t eat meat for a long time, influenced him. “One thing I can say for sure is that nobody forced me to do anything, I simply did not want to eat the flesh of animals that had been killed. At first, my mother tried to feed me meat and fish, but I baulked and she quickly gave in. But I had a hard time at preschool, where they had no use for my quirks.”

Glukharev is convinced that if vegetarian preschools had existed in his time, his parents would have taken him there. “My most vivid memories of kindergarten are when they made me eat that damn meatball. I would sit and stare at it and cry, as the formidable nurse would hover over me, demanding ‘Eat your meatball, Glukharev.’ I was torn between eating the meatball, to put an end to this nightmare and make them get off my neck, or to stand my ground. There were tears and fights until my parents stepped in and talked to the teachers.”

Sharaf Maksumov is a lacto-vegetarian who eats milk and honey. His pregnant wife shares his principles. But they are already wondering what kindergarten to choose for their future child. “From the experience of our vegetarian friends, we know that no teacher at a state-run preschool would cook food specially for him,” Maksumov said, adding that he doesn’t really expect such things. “Problems arise not because somebody tries to force our children to eat meat. Simply no one at meal times watches the kids to see that they are given the food that their parents brought and the children are too young to remind the nurses.”

Adults have their own reasons for thinking that animal food is bad. Some feel it is a moral issue, some think it is bad for their health and others simply think eating meat is disgusting. But when it comes to children, the issues become more complicated. Many people who agree that adults can decide what to eat on their own have problems with others restricting the diets of their children. Vegetarians counter that there is no reason for adults to decide whether children should eat meat.

Katya Ilgner used to babysit for the son of a vegetarian friend and would sometimes secretly feed him meat. “I didn’t like his vegetarian kindergarten, where the children were given nothing but beans, vegetables and soy cheese,” Katya said. “The three-year-old always wanted meat. Sometimes I took him to my house and I cooked borshch and meatballs for him. I was fond of him and I was sorry for him. Once, he fell ill with severe bronchitis, which developed into pneumonia. He was in hospital and the doctors said he was anemic; there were not enough red blood cells in his blood. They said that he should be fed well, given liver and beef. My friend refused. The chief doctor summoned her to his office and talked with her for more than an hour. Since then she has been feeding her son properly. Little by little, she herself stopped being vegetarian.”

“Love is more important than fasting”

Roman Avdeyev, the owner of the Moscow Credit bank, is a vegan and is raising his family according to that lifestyle. Roman and his wife are bringing up 20 children – some are their biological offspring while others are adopted. “Upbringing is all about coercion,” Roman said. “Parents have to make many decisions for their children – including regarding what to eat.  I personally think killing animals for fun, to indulge your culinary whims, is unacceptable. I try to instill this in my children.” But Avdeyev has two sons who do not live at home, and they are not vegetarians. “It’s their choice.” He also does not mind when his children are given sausages at school or kindergarten. He thinks it is much more important for the children to socialize with their peers and learn how to act around those who do not share all their beliefs. “I don’t want them to set themselves apart from society. If they eat a piece of meat, nothing terrible will happen. The ascetic monk Tikhon Zadonsky once dropped in on some monks during the fasting period to find them eating fish soup. The monks were scared of what was coming. He took a spoon, sat at the table with them and said: ‘Don’t be afraid. Love is more important than fasting.’ I preach a similar faith. I tell my children what is good and what is bad. But if they stumble or follow a different path when they grow up I will not pressure them.”