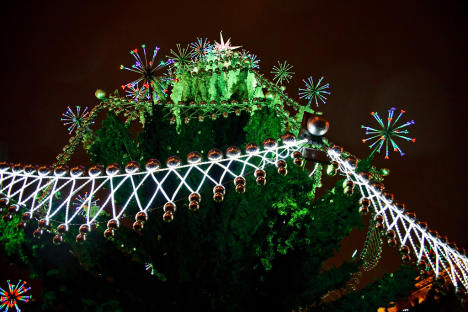 Russians tend to believe that the way you celebrate New Year’s Eve will determine how you spend the new year.

Several years ago, I was having a conversation with a Russian taxi driver when he used the expression “when snow falls upwards” – meaning, something that will never happen. I remembered that saying some time later when I decided to try and visit all my friends one New Year’s Eve. I was visiting Moscow for only three days: from Dec. 31 to Jan. 2 and I decided to forget about seeing any museums or monuments and devote all my time to seeing friends. I decided on five places to visit on New Year’s Eve in order to see all my friends in one short night.

I am at the house of the family I stayed with while an exchange student. They are a couple with 7-year-old twins. They always celebrate New Year’s Eve together, at home, because their favorite saying is: “Tell me how you celebrate New Year’s Eve, and that’ll be the way you’ll spend the New Year.” In the corner is a fir tree. The father of the family cut it in the woods according to their tradition. Its top reaches the ceiling and has a star that shines when turned on. The rest of the tree is decorated with old toys: some cars from the Soviet era; chocolates in the shape of Grandfather Frost; astronauts with red cheeks; paper birds and mechanical dogs. After dinner, the children go to sleep and the adults remain in the living room. We drink champagne and watch the program “Goluboy Ogonyok” (The Little Blue Light), a low-quality music show very popular among the Russians. I decide to leave my hosts before midnight, so they could celebrate alone.

The next stop is the Lubyanka metro station. It is very close to Red Square and from there you can see the fireworks without having to get into the crowds. I am running late and dash into the metro. My train is leaving and the doors are closing. I knock nervously at the driver's door and ask him if he can open it. He does, and invites me to come in. For the first time in my life, I travel in the metro in the driver's cab!

I offer him a mandarin from a bag I am carrying. He takes one, and a bit later, in return, he gives me a bottle of champagne, confessing that he does not drink when on duty. I return to the surface but, in order to access Lubyanka Street, I have to pass through a metal detector. The police are surely looking for alcohol rather than weapons or other metal objects: they are forcing people to leave their bottles behind before entering the city center. My friends are waiting for me on the other side. I hide my champagne bottle under my coat. After seeing the fireworks, we are leaving the center when suddenly my friends start to dive into the piles of snow on the sides of the street.

"I cannot find our whiskey. But I have found a bottle of rum!", says one friend, digging his hands into the snow and pulling out a bottle with a Havana label.

We agree to take the rum and believe that the karma of the universe will allow the rum owner to find our whiskey.

The third stop of my schedule is a club where a Soviet-style party is being organized. After I have finished the bottle with my friends, I say goodbye to them and head to the club on foot. All of a sudden, I notice a lot of steam and water and then I begin smelling something terrible. I realize that some pipes have blown up and that the street I am heading toward is now a river of hot water and fetid garbage. A small workman is trying to fix this chaos. He is a bit drunk and sings happily “Woman is fickle.”

"How can I reach the “Dacha” Club at 18 Pokrovsky Boulevard?" I ask him.

"You can't. It's at the end of the road. You will have to take a much longer route. Well, I can carry you there if you want."

Before I can say anything, the worker grabs me, puts me on his shoulders and begins carrying me to the club. He sings while walking. Once we arrive, he puts me down and says “Happy New Year!” and goes away in the same way, singing “Woman is fickle.”

In the club, people wear 1920s style clothes and dance to swing music. There is also someone in a white shirt and a red tie, like a Soviet pioneer. On the walls there are photographs of Gagarin, Lenin and happy workers. I put the bottle of champagne the driver left me among the presents. I can’t stay long, because otherwise I will risk missing my last stops.

I have to reach the other side of the city where Moscow bohemians are throwing a “more intellectual” party. The streets are empty and suddenly a police car passes nearby me and stops at the traffic lights. I knock on the window, the policemen open the door. Smiling, I ask them to drive me to my friends’ house, since they are going in the same direction. Twenty minutes later, I get out of their car near my destination. The doors of the two-room apartment on the top floor are open and about 50 people are inside. Someone is playing the guitar and singing U2 songs. In the second room, someone is reading Pasternak’s poems, and there is a smell of hashish. I do not know anyone, but eventually I find my friend, who is playing chess with his dog. The animal is asleep in front of the chessboard and my friend is totally drunk. In the kitchen, people are playing “Liar.” On a table there are small glasses – some filled with water, others filled with vodka. You must drink them in one gulp and look the other players in the eyes. If someone notices that you drank vodka, you lose. And so you keep on drinking until the last one remains, the biggest “liar” of all. They invite me to play. I win and they award me with a honey pie, called “medovik.” I leave the apartment, still having the last stop to go to: a dacha in the Moscow suburbs, near a town called Lobnya, where my friends are celebrating the New Year in a banya.

It is cold, but there is no snow. The street is empty. The bus is coming in 30 minutes. It comes without slowing down. I try to stop it, jumping out into the road, and I almost end up in front of it. Eventually it stops and opens the door.

"Where are you going?", asks the driver.

"I am going to Lobnya, but I cannot see if the bus is going there or not, it is not written anywhere…"

"I don’t know. Ask the passengers."

The driver’s reply sounds strange. I get on the bus and see 30 men, all dressed like Santa Claus with red and white outfits. As they see me, they start laughing and shouting that Snegurochka, the young Snow Maiden, has finally arrived. The Santa Clauses are going to Lobnya to take off their outfits. The company responsible for organizing New Year’s Eve events is located there. Those poor men worked all day and now they are going back home.

I get off the bus, say goodbye to the Santa Clauses and give the honey pie to the driver as a sign of gratitude. All my friends have already finished the steam bath. I hear them joyfully screaming and dabbling in a small lake near the banya.

"Do'nt offend us, please. Of course not! Come here!"

One friend of mine suggests I got to his house to sleep. We meet his grandparents on the doorstep. They are still awake and we sit down to have a cup of tea with them.

"No, it isn’t hard. Fifty years ago we met right on New Year’s Eve, and we’ve been together ever since. Do you want to see some pictures?"

I realize that the table is entirely covered with photographs. Struggling with tiredness, but with great interest, I start looking at them. They remind me of the family I stayed with, and my first hosts on this New Year’s Eve. It starts to snow.

I wake up and look out the window. There is a drunk Grandfather Frost on the street. Maybe he missed the bus to Lobnya. His bag is broken and chocolates are tumbling out of the hole. Two stray dogs follow him and eat them up. There is a lot of wind, a light storm. Snowflakes are flying upwards.