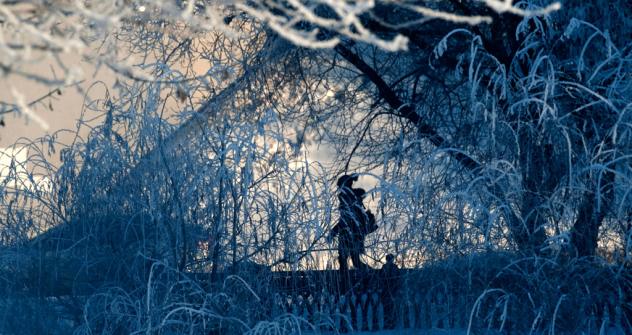 Russians are well-versed in coping with winter.

The word “Russia” immediately triggers an association with snowdrifts in Siberia. And indeed, sometimes it does get really cold in Russia, but in reality, the climate zones in the country range from polar to subtropical. For example, Sochi is located on the same latitude as Nice and boasts winter temperatures of about 60 degrees. This sounds pretty good to the 470 denizens of Oymyakon, a town in the Republic of Sakha (Yakutia), where the thermometer dropped to -97 last year.

In Moscow, winter lasts for about four months, with snow falling on approximately 50 days out of 365. Up to 16 inches of snow can fall overnight, requiring municipal utilities to make every possible effort to clear the streets.

As soon as it starts snowing, snow-cleaning machines are sent on to the city streets. “An inch or two of fresh snow is never a problem; it is routine for us,” said Petr Biryukov, the head of Moscow municipal services, who is responsible for coordinating the work of the utilities during the winter. Only particularly heavy or long snowstorms cause real difficulties, with lines of snowplows appearing on the city streets every 10 minutes. A single machine cleans about seven miles of road surface per hour. The snowplows also detect holes in the road and report electronically on their exact location to the road construction service.

Snowplows push snow to the side of the road, where the piles are loaded into dump trucks and then taken to one of 200 snow-melting units, each capable of turning up to 300 tons of snow into water per day. It costs the city $26 million a year to maintain its snow-clearing fleet.

These efforts may make life easier for Russian drivers, but they still have costs unknown to those in warmer climates. Car-owners in Russia have to buy winter tires and huge amounts of windshield-wiper fluid – up to 1.5 gallons a day. Many motorists install an additional tank for it in their cars.  Parking lot attendants also often ask drivers who leave their vehicles overnight if they have a heater that works after the engine is turned off. Without such a heater, starting the car will be impossible at temperatures below – 31 degrees.

Over time, Russians have adapted their strategies for dealing with cold to changing technologies. Fifty years ago, Russians warmed up in the banya (Russian sauna) and drank tea heated in a samovar. Today, Russians don’t have to worry about being warm inside since all Russian buildings have central heating. The problem with this is that there are no individual thermostats. A comfortable room temperature can be achieved only by opening the windows slightly. Overheated rooms and hot dry air are a universal problem in the country – and a boon for humidifier sales. Field tests conducted by Bosch and Siemens in Russia have shown that use of modern heating and insulation could save up to 80 percent on heating costs, but despite this, the central heating model seems to remain the only viable one. To prevent the water pipes from freezing, hot water is first heated at power plants and then pumped directly to homes.

Animals that live in Russia have also evolved to cope with the cold. The Siberian tiger, also known as the Amur tiger, is not only the biggest of all tigers, but also the only one that lives in an area where there is snow and ice. Temperatures on the Far Eastern Amur River can fall as low as –49. To deal with the weather, the tiger has long thick fur and a two-inch layer of fat that protect it from freezing to death.

To avoid being cooped up inside all winter, many Russians take up winter sports – some of them extreme. Jan. 19 is an important day for those who are often called “polar bears” in the West but known as morzh – walrus – in Russia. On this day, which Russian Orthodox believers celebrate as the day of Jesus’ baptism, several thousand Russians wait for the moment when priests bless rivers and lakes, and then plunge into the water, sometimes through a cross-shaped hole cut through thick ice. Very few people freeze in ice water because everyone knows the rules: you dip three times, then rub your body well with a towel, and put on warm clothes or, still better, go to a banya. And although usually the event goes off without a hitch, emergency services personnel are always on hand.

Winter sports that qualify as more fun and less extreme are sledding and skating. Many Russians also love to cross-country ski in the forests. In some ways, skiing is the great equalizer. Often a senior citizen on his Soviet-made wooden skis effortlessly leaves behind much younger skiers using fiberglass models. Skiiers often carry a thermos with hot tea to the forest, but a flask with stronger drink can also prove an ideal warming device.

Russian men seeking to get away from the everyday bustle can also be found on frozen lakes: Armed with an auger, they screw through the ice to gain access to the water. Wrapped in warm clothes, often sitting in tents, they meditate in front of eight-inch holes in the ice for hours, waiting in the frost and cold and hoping for a fish to wake from its winter stupor and bite. Observers can ask them cautiously, “well, have you caught anything?” but a surly face will be the most likely response. Anglers are generally withdrawn, and those who specialize in winter fishing especially so.

And what do Russians wear in the winter?

Mittens are a popular accessory. They were brought to Russia by the Varangians, which gives mittens their Russian name: varezhki.

Traditional Russian felt boots, valenki, are the equivalent of mittens for feet made by felting lamb wool. These boots protect from toes from the cold even at temperatures below -30. However, they are not water-resistant and have no outsoles, which is why they are traditionally worn with galoshes. The number of felt boots produced in Russia annually is estimated at 4.5 million pairs.

And among other extremities that need protecting are the ears. This is accomplished with an ushanka: a fur cap with ear-protecting flaps. The name derives from ushi – the Russian word for ears. Today there are many varities of ushanka available, from simple ones made from artificial fur to luxurious sable fur models.