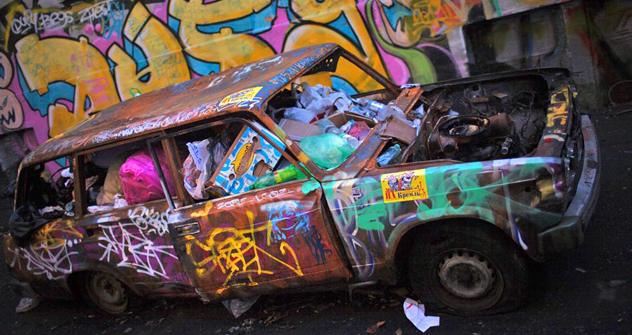 Moscow is peppered with graffiti tags - the drawings, painting and writing of various artists, who want to leave their mark in the urban jungle. But what is the distinguishing feature of Russian graffiti?

The first graffiti appeared in the Soviet Union at the end of the 1980s. Graffiti writing was one of the four pillars of hip-hop, along with breakdance, DJing and rap. For a long time, these four elements developed as part of the same phenomenon. At the end of the 1990s and the beginning of the 2000s, a small hip-hop revolution happened in Russia. The lifestyle suddenly ceased to be an underground movement and started to become fashionable, although it never quite made it to the mainstream.

Many graffiti writers who started at this time look back at the 1990s and early 2000s with a certain nostalgia. Information and paint were very hard to come by back then, and the struggle to get these instruments of the trade shaped the movement.

About five years ago, however, graffiti began to enter popular culture. Young people began leaving tags anywhere and everywhere they could. Graffiti also took on a new meaning in the minds of the general public; it could now also be seen as art, rather than vandalism. This change in the public perception of graffiti is largely thanks to projects such as the annual Faces&Laces exhibition in Moscow. Faces&Laces, now in its fifth year, aims to promote various kinds of contemporary street fashion, underground art, visual communications and alternative forms of modern art.

Moscow’s most active group of graffiti writers is ChTO. They look like ordinary guys, but their looks belie their talent and motivation. One night at midnight, on a lively crossroads outside the Chistiye Prudy metro station in the center of Moscow, some ChTO members emerge from the subway and go into a shop where they buy several cans of spray paint, put on masks to hide their faces and gloves to make sure their hands are clean if they’re caught.

They have to be in good shape, since they often have to run from police. On this particular night, they have only begun writing outlines when someone notices a police car.

It was unclear whether this was a routine patrol, or whether someone had intentionally called the police, but the CHO members put everything down and run through various courtyards. Ten minutes later, however, they came back and finished what they had started.

Adrenalin. Excitement. This is why young people are willing to risk spending their nights outside writing on the walls of Moscow. Art and ideas are only of secondary importance. Now, Russian graffiti just needs to gain worldwide recognition.

Russia Beyond the Headline’s Prokhor Kolosov met up with the members of CHO, who agreed to be interviewed, but only identified by their initials.

RBTH: Where did the idea for ChTO come from?

R: About three years ago, my friend and I went to paint somewhere with rollers, and she suggested we continue to work in a team. This was actually the summer when the government handed out paint to artists for decorating boiler houses. We spent the whole summer painting, mainly images of faces. Somehow these caught the public’s attention. People were saying: “At last! Graffiti that is more than just random words.” When our cans ran out, we bought the cheapest brushes and paint we could find. In the spring we stole paint off the Tajiks who were doing restoration work around the city or decorating underground walkways.

Then we got to know some other graffiti guys, and so we joined up with them, then more and more people joined, and now there are nine of us.

The name CHO came about when we were drawing these crazy faces, and actually some guys found this really funny, all the faces looked like they were saying “Go on then, what? What you staring at?!” (In Russian, this is: Nu, chto? Chto ti smotrish?!”) – so it came from this.

RBTH: What is your craziest story about graffiti writing?

R: A year ago I invited everyone to my place. One of the CHO guys is actually a rapper, and last year he represented Moscow in the “Battle of the Three capitals” in Perm. The guys started a rap battle in my apartment. This involved a lot of loud music and stomping on the floor, then they started rapping, then everyone joined in, the air was thick with cigarette smoke, there was a hell of a lot of beer. And then the doorbell rings. No one ever rings my doorbell, so I know it’s not one of my regular visitors - I turn off the music, everyone goes quiet and I go to see who it is. There are three policemen standing there, someone must have called them. Everyone sat there quiet, waiting for the cops to go away.

So I we decided to leave and go paint. We walked to a newly built subway tunnel. There were more than 10 of us, and we were destroying everything as we went along. Eventually we came to the place - we could hardly stand up at this point - and the guy in charge sets up the camera, and we start writing. Then a bunch of tough guys appear looking for a fight, and as if that wasn’t enough, people started throwing bottles at us from the apartment block.

S: I was painting at the edge of the group and I noticed that some builders were slowly coming in our direction. I tell everyone that someone’s coming.

R: I can’t remember which direction they were coming from. S comes over to me from the left and says: “they’re getting closer!” I look to the left and see that all the other guys are running towards me on top of the narrow parapet. But I just had to finish putting in the highlights then I’d be done. I’m thinking “What the hell?” The builders are nearly upon me, and then I slip and fall head first onto the road. They grab me. I try to break free, but I can’t. Then I shouted something to tell the others I was in trouble, and the next thing you know the puniest guy in CHO is squaring up and he hits a builder around the head with a string bag full of empty cans. Then we spent the rest of the night running away from police and security guards – they’d started a whole manhunt for us!

I: Then my motorbike wouldn’t start, so we get it going by pushing, but there are all these guys following us. We go into some narrow dead-end, I turn around and give it some gas, and we zoom out right between them.

R: Yeah, and that’s not all, I realize that I’ve left my ID card there and so I have to go back. There’s already loads of security guards there, they’re looking for us, and we’re looking for this card.

One of the guys had this pimped-up Subaru Impreza, and when they found video equipment in the trunk, this must have set alarm bells ringing and the policemen go up to them and ask: “so guys, what do you have here?” In the end we got away with it by saying that we’d been filming road racing at a track near Khodynka. Thank God they didn’t ask to see the film. All the papers for the car were at home, so I had to go and get them. And when I got back to the car, the police and the CHO guys had made friends. The policemen obviously liked the car.

RBTH: How do you get along with other graffiti writers?

S: At the moment everything is just in its first stages, so we are all in the same boat, and it’s only now that people might start to see things differently. But actually there are loads of people and teams who support what we do.

RBTH: What does graffiti mean to you?

S: For me graffiti is creativity, creativity on the street, because the street is where I live my life.

RBTH: So what do you associate yourselves with most – graffiti or street art?

S: We’re closer to street art – we just do whatever comes into our head, we don’t work to a specific plan.