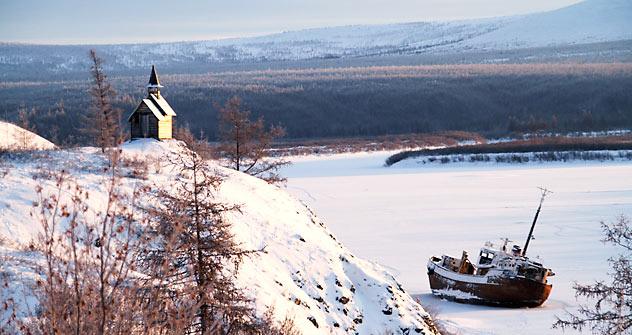 Between 60 and 70 percent of Russia’s vast landmass is covered by permafrost, and most of Russians known mineral reserves lie in frozen ground. Developing oil and gas fields ultimately present a much bigger threat to the permafrost than global warming.

Permafrost is definitely not permanent. And this fact could potentially cause a lot of problems. Frozen earth does not make for stable foundations, and anything you build on it, from houses, to railways, to gas pipelines, is at the mercy of the elements. However, when the lion’s share of your country’s national wealth is located is under frozen ground – according to some estimates, 70 percent of Russia’s known gas reserves are covered by permafrost – the question of how to deal with the difficult soil must be confronted.

The organizers of an international conference on this theme, “Resources and Risks in Permafrost Regions in a Changing World,” scheduled to take place next summer in Salekhard, the capital of Russia’s Yamal-Nenets Autonomous Area, say the natural resources most commonly found under permafrost are oil, gas, coal and diamonds – all profitable and in great demand.

The excavation of permafrost regions raises several important questions: Who is going to develop these resources, how are they going to do it, how much irreversible damage will it cause to the environment, and what is going to happen to the permafrost itself?

One of the most widely held and alarming opinions is that the permafrost will melt as a result of global warming. This summer, for example, Vladislav Bolov, head of the Antistikhia Center of Russia’s Ministry for Emergency Situations told RIA Novosti that Russia’s permafrost is set to decrease by 10-18 percent over the next 30 years, that the temperature of frozen ground in the Yamal-Nenets Autonomous Area will rise by an average of 1.5-2 degrees, and that by the middle of the century, the permafrost will have shrunk to cover an area just 95-125 miles across.

But are the changing conditions of the permafrost really something to be concerned about?  Earth’s climate has always been in a slow state of flux. According to Galina Malkova, a fellow at the Earth Cryosphere Institute, future rises and falls in the Earth’s temperature are impossible to predict: Scientists have been logging the Earth’s temperature for nearly 50 years, and clear, predictable patterns are yet to be found. A small consolation is that the temperature of the permafrost is not as volatile as that of air, and it therefore takes some time to melt.

But this time is accelerated when the permafrost becomes a foundation for construction work. Between 40-90 percent of permafrost consists of frozen water (depending on the permafrost), and in natural conditions, layers of peat and vegetation on the surface prevent the ice from being affected much by high temperatures in summer. If the top layer is destroyed in the course of construction or excavation, for example, there is nothing to stop the ice melting. Any artificial insulation that is put down to replace natural vegetation is simply not going to do the job as well.

When building on permafrost, every single oversight made at the design, construction and eventually exploitation stage (for example, inadequate insulation or waste-water leakage) is potentially disastrous. According to a recent Greenpeace report: “Each year, up to 55 billion rubles ($1.7 billion) are spent on the maintenance of gas pipelines and correcting mechanical deformations that happen as a result of the melting permafrost,” and an estimated 7,000 accidents happen in western Siberia every year. The shrinking permafrost is also a threat to residential buildings, regardless of when they were built: A new building can become inhabitable in a very short period of time if the ground it is built on starts to melt and shift.

Nevertheless, such is human ingenuity that people have been able to build on icy foundations (and even underneath them) with some success. The Merzlotnik caverns in the city of Yamburg were carved out of the frozen earth in 1956 as a place to store food. They consist of three underground galleries between 328 and 460 feet long. Today these underground tunnels are more a monument to human endeavor than anything else. In 50 years of constant use, Merzlotnik has never had to be restored – it remains as strong as the day it was built.

Then there is Gazprom’s famous bridge across the floodplain of the Yuribei river, completed in 2009. The bridge is 2.4 miles long, and represents a triumph of engineering and ingenuity in the most adverse conditions. It is with some pride that Gazprom announced on its website that the company had “managed to erect this bridge on ground that was practically impossible to build on.” What made this piece of land particularly difficult is that in addition to being permafrost, it contains cryopegs – pockets of brine with very low melting temperatures (sometimes as low as -22˚F) – that make construction particularly challenging. Another interesting feature about the bridge is that it “hangs” over the entire river basin, not just over the water itself, therefore minimizing its impact on the ecosystems here. This is all the more important as the development of new rail lines and oil and gas fields place huge pressures on the environment.