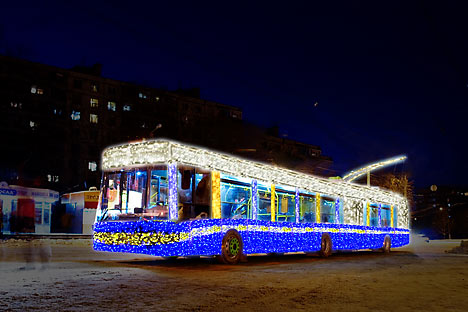 What do Santa Claus, pine trees and presents have in common? Obviously the answer is Christmas – but not in Russia.

If you came to Russia in December, you would quickly learn that an old man bearing gifts (Ded Moroz, Russian counterparts of Santa Claus) and decorated fir trees are symbols of New Year. You would also find snow. Or, at least you’d hope to. But global warming is doing strange things to the Russian climate and this year it’s warmer than in my hometown in England. Consequently, there’s no snow.

But last year, I spent New Year’s in the Siberian city of Novosibirsk, where there was plenty of snow. I had been living in Novosibirsk for only a few months, struggling with the demands of the language and longing for some of the comforts of home, but enjoying the new and wonderful experience of living in Siberia nonetheless. Siberia is uniquely beautiful.  The first time I took a trip out of the city after a heavy snowfall was an unforgettable experience.  Snow-covered trees stretch endlessly to the horizon, the frost was almost visible in the air, and despite the inhospitable climate, or rather because of it, the Siberian landscape creates an awesome impression.  It is almost like something religious.  Were it not for the danger of the tears freezing in your eyes, you would want to cry.

I came to Siberia in an attempt to discover the “true Russia” which is not always comprehensible to the tourist who fails to make it out of Moscow or St Petersburg.  So when, on a December afternoon, a Russian friend invited me to spend New Year's with her, I jumped at the opportunity.  The only condition was that I agreed to come without inquiring about the plans she had made. The next day, she found me and gave me my ticket for the New Year's party. The design on the ticket featured Ded Moroz, the snow maiden Snegurochka and a trolleybus.

The evening came.  Before the party was a traditional New Year's feast, which consists of strange gastronomic legacies from the Soviet era.  First is the Salat Oliviye, a salad which, in the grand tradition of Russian salads,  is mysteriously lacking in vegetables and very heavy on mayonnaise.  Next is Shampanskoye, a Russian knock-off champagne whose poverty in taste is exceeded only by its ability to deliver massive hangovers.  Finally, and most incomprehensibly, all is finished with a mountain of mandarins, a fruit that inexplicably takes on holy status during the Russian holiday period.

At 9.00 pm, all were aboard the party bus. There were about 20 people sitting around tables. At the back, there was a buffet and a sound system, at the front, our organizer and impromptu entertainer; a rather plump middle-aged woman. Soon the vehicle lurched from its starting point, marking the official start of proceedings.

The drinking throughout the night was heavy but, fueled as we were with oliviye and festive spirit, no one lost their energy for a moment. The journey itself was punctuated by stops and excursions, especially for the countdown to midnight, which we spent with hundreds of others in a large park. At some point after midnight, we were visited by Ded Moroz.  He presided over an unusual competition whose two main and somewhat unrelated tasks included sliding over the ice backwards on a sheet of tarpaulin and the recitation of Russian tongue twisters.  I won first prize, as default for being the only foreigner and having managed to pronounce at least one of the tongue twisters vaguely correctly.  My prize was a giant cake in the shape, naturally, of a trolleybus.  Having been called upon to make a speech, I gushed forth with praise for the warmth and hospitality of my hosts.

And it was at this point, overwhelmed emotionally, that I understood what exactly, besides the complete unfamiliarity of the surroundings, was “truly Russian” about this situation.  There is a collective mentality here, nurtured by hundreds of years of life in the peasant commune, which manifests itself during such events as New Year.  Don't be fooled by the occasional grumpy shop assistant; Russians are some of the most welcoming and friendly people you will ever meet.

So if you do happen to be in Russia over the holiday period, remember to think carefully about what you do for New Year's Eve. Despite any anxiety you might have about linguistic or cultural barriers, an evening in the company of Russians and an authentic New Year's party away from the usual expat bars sterilized of local culture will be an unforgettable and “truly Russian” experience.

As for me, as soon as that snow finally starts to fall I'll begin the search for a New Year's party to rival the last. Hopefully it will involve a bus.