Take a spin on the ice 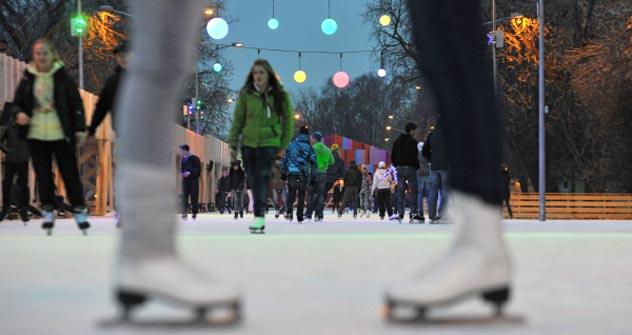 Ice skating brings people together. This year Gorky park is expected to host a lot of Russians and foreigners who like to take a spin on the ice. Source: Anisia Boroznova

Russians love to ice skate, and residents of Moscow have a new venue to enjoy this pastime – the largest ice rink in Europe now open in Gorky Park.

Ice skating is the most popular winter sport in Russia. This fashionable pastime unites people from all walks of life: students, trendsetters, successful businessmen, expats and immigrants from Central Asia can all be found twirling around the rink.

On Dec. 1, the biggest open-air ice rink in Europe opened in Gorky Park. This rink, the most modern structure of its kind in Russia, is covered in artificial ice and has an area of 15,000 m2.  Its operators hope the ice-rink will be in use right up until spring.

Despite its impressive size, the ice rink occupies a fairly small area in the middle of the enormous park. Visitors who wish to skate must buy tickets from the bright pink pavilion at the rink’s entrance. The ticket-sellers are friendly, but most of them only speak Russian.

The changing rooms are warm, and there is a screen inside showing Dozhd’ TV, which markets itself as Russia’s “optimistic channel.” Meanwhile out on the rink skaters will be able to hone their moves to the sounds of popular Internet radio station Follow Me. There are regular announcements over the speakers welcoming visitors to the rink and telling men not to be shy about asking girls to dance.

The ice rink itself covers the central avenue in the park and several of the paths that lead to it, all of which have been covered in ice. The paths are surrounded by wooden rails, so for those who have not quite found their feet, there is always the option of clinging to the railings and edging along to the nearest bench.

Unlike the shoebox-sized rinks that tend to appear in European cities around the holidays, the ice rink in Gorky Park is more like Disney’s Adventureland.

This place is full of surprises: a wooden bridge has been put up over the rink giving non-skaters have a bird’s eye view onto the ice. Threads of twinkling lights have been hung over the rink in a vine-like structure, and the surrounding snow-covered lawns are scattered with sparkling Christmas trees. This project is the brainchild of two architecture firms: Russia’s Wowhouse and the German company 4a Architekten.

Despite its many attributes, the skating lanes themselves are quite narrow.

“[Roman] Abramovich said that after the New Year celebrations are over we might be able to give skaters more space,” said Nikolai, a rink employee. “But the rink still hasn’t made a profit yet.” As it turns out, famous Russian oligarch Roman Abramovich is one of the main investors in the Gorky Park ice rink.

The rink isn’t only losing money on admissions.

“The first two days we were open 280 pairs of ice skates were stolen,” said Nikolai.

For the first few days the ice rink was in operation, skates were given out free of charge to visitors paying to skate.

“We bought 5,000 pairs of ice skates so that everyone would have a chance to have a go,” said Sergei Kapkov, the manager of Gorky Park and head of Moscow’s Department of Culture, in an interview with “Bolshoi Gorod” magazine. “We didn’t ask for a deposit: We thought that the park is for the people of Moscow, and asking for a deposit would go against the ethos of the project.”

However, the temptation to take home a pair of brand-new ice skates proved too strong for many Muscovites. Now visitors must leave a deposit of 1,500 rubles ($50) to rent skates.

The ice rink in Gorky Park has a special area set aside for ice hockey, a medical center, an ice-maze for children and several cafés serving hot food and hot drinks, including mulled wine and coffee.

The joy of skating from Russia Beyond The Headlines on Vimeo. Background misic: Mescherin's Orchestra - Dancing Dwarves

The rink also has plenty of space for ice games. The easiest ice game is sometimes known in Russian as Rucheyek (little stream). Players split up into pairs, form two lines, hold hands with the person opposite and raise their hands in the air to form a sort of tunnel. Someone then skates through this tunnel, and as they are doing so they grab another person to be their new partner, and the new pair skate back and join the others. And so on. This is not a bad way to get to know people, and might also be a good setting in which to meet that special someone.

The most fun ice game is perhaps the Ice Train. People line up and everyone holds on to the shoulders or waist of the person in front of them. The person in front has a whistle, and when he or she blows on it, the whole mass of people begins moving around the rink like a long train. The fun starts when parts of this train break off as it goes around corners and turns loops.

A game known as Koldunchiki (little sorcerers) is not for the faint-hearted. People form two teams. Members of one team scatter around the rink, and the members of the other team try to catch them, tap them on the shoulder and “put them under a spell.” The people who have been caught have to stand still, and wait until someone from their team can skate over and free them. For the first team, the aim of the game is to catch all the members of the other team, and the second team tries their best not to let this happen.