A Window to Soviet Moscow 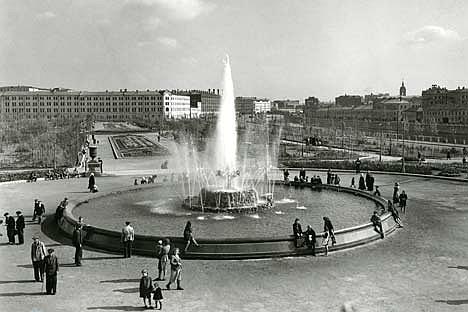 A photography exhibit echoing 1950s Moscow stirs up memories of the Soviet capital.

Looking at Moscow’s Manezhnaya Square in the 1950s, few people would recognize what has now become a must-see destination for foreign visitors. Hardly anyone remembers the double-decker trolleybuses, the first Soviet car, the Russo-Balt, or children’s sandboxes located right in the middle of Tverskoi Boulevard.

The Moscow of the first half of the 20th century, glorified in hundreds of Soviet-era films and songs, was incredibly different from contemporary Moscow. What did the Soviet capital look like at the time? Moscow Stories: A Twentieth Century Photo Album, a recent exhibit in the Lumière Brothers Photo Gallery located in the Central House of Artists, showed it to those who never knew, and reminded those who have forgotten. The work of the best Soviet photographers – Boris Ignatovich, Naum Granovsky, Alexei Gostev, Emmanuil Evzerikhin and Vladimir Stepanov – were featured in this exhibit.

“I was 17 when I took my first photos. It was 1957,” said Stepanov. “We were taught to take pictures in Young Pioneers’ hobby groups, and there were many of those groups in the Soviet Union at the time. My camera was dirt-cheap, but the photos were very good. And you know, that was when I adopted a motto for myself: ‘Photograph what no one else photographs.’”

Natalya Ponomaryova, the curator of the exhibit, discussed the challenges faced by amateur photographers in the mid-century:

“Not everyone could take photos of Moscow in the 1950s, and very often security officials approached photographers and ruined the film by exposing it to light, or even confiscated their cameras. As a result, photographers started taking pictures of Moscow through car windows. You can see these photos in the exhibit.”

The show covers the 1934 meeting of the rescued members of the Chelyuskin Arctic expedition and the 1953 farewell ceremony at Joseph Stalin’s funeral, attended by thousands of people for three days and three nights. Most of the big events are all shown: Russian revolutions, the opening of the All-Russian Agricultural Exhibition, World War II, the construction of Moscow State University in Sparrow Hills, the opening of Luzhniki Stadium and the Fourth World Festival of Youth and Students.

But Soviet photographers trained their lenses on other things as well.

“Along with major public events, we also sought to show the everyday life of Muscovites: leisure time in our beloved city’s parks and boulevards, an elephant walking near the Red Army Theater, children playing in sandboxes on Tverskoi Boulevard, residents of the Maslovka and Zamoskvorechye districts,” said Ponomaryova.

Moscow life is also shown through human relationships. Photos of amorous couples embracing near monuments or cinema box-offices, a picture of a boy sitting near a monument reading a book––each photo tells its own little story.

The life of the city from the early 20th century through the 1960s was displayed in 300 photos displayed in three rooms. Some people found that that was not enough, however. The guest book features many emotional entries, some worth noting:

“Thank you for bringing me back to my childhood, and thank you for letting our children know what our Moscow was like.”

“This is how Moscow history should be taught in schools.”

“It’s a pity that these are all just photos, that everything is gone forever, like old movies. This exhibit is truly a breath of fresh air amidst the urban jungle!”

During its last days, the exhibition attracted a great number of visitors. This exhibit has closed, but locals and tourists will have another opportunity to cast a nostalgic glance over the Russian capital during the second half of the Moscow Stories exhibition, which will cover the period from the 1960s to the 1990s.