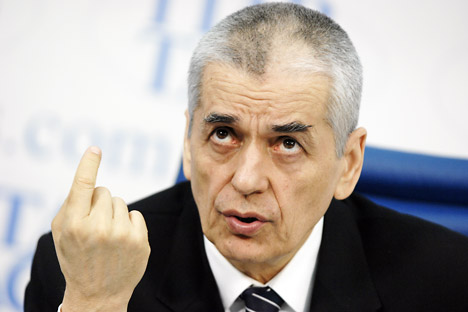 Politicians often make outrageous statements, and the year of upheaval that was 2011 brought about more than usual. Here is Russia Beyond the Headlines’ list of the 11 most notable political comments of 2011.

“You want me to make a shrine out of this rusty pipe?”Belarusian President Alexander Lukashenko on the Beltransgaz natural gas pipeline

Lukashenko gave the green light to Russia’s Gazprom taking control of the Belarusian national gas transport company Beltransgaz. Moscow gained total control over Minsk’s gas pipeline system, which not only delivers natural gas to domestic consumers but also provides energy transit to Europe. In exchange, Russia granted Belarus a discount on its gas imports from Russia, which experts believe will save Belarus an estimated $2.5-3 billion annually.

“This explains why invaders are looking at our land so greedily and why they wish to lay their hands on it. The holiday season in Georgia lasts for almost six months – from May to Nov. 11.”Georgian President Mikhail Saakashvili, after a swim near Batumi

With a two-mile swim near the Batumi yacht club, Mikhail Saakashvili promoted his country as a vacation desination. The swim was followed by a game of water polo with Tbilisi Mayor Gigi Ugulava and Georgian Sports Minister Lado Vardzelashvili.

“Mr. McCain was captured in Vietnam and they kept him not just in prison but in a pit. He spent several years there. Anyone would go nuts; what else can I say?” Russian Prime Minister Vladimir Putin discussing U.S. Senator John McCain (Republican, Arizona) on his annual televised Q&A session

During his call-in show on Dec. 15, Putin slammed McCain, who has been a vocal critic of the Russian leader. The senator replied by tweeting: “Dear Vlad, is it something I said?” and added a link to the article in the “Huffington Post” entitled “Putin Mocks Protesters, Calls John McCain 'Nuts.'”

“… Allah gives us the money, I don’t know where it comes from, we just have it, that’s it…”Ramzan Kadyrov, head of the Republic of Chechnya, on the sources of financing for the renovation of the region's capital

Rather than throwing a giant party for his 35th birthday, Chechen leader Ramzan Kadyrov celebrated on Oct. 5, Grozny Day. But he did invite international celebrities, including Hilary Swank, Vanessa Mae and Jean Claude Van Damme, who thanked Kadyrov by shouting: “I love you, Ramzan.”

“We are knocking hard at Europe’s door. The Ukrainians want to get back home, to the European community.” Former President of Ukraine Viktor Yushchenko, on Ukraine’s willingness to join Europe

During his visit to Kiev this April, Russian Prime Minister Vladimir Putin once again called on Ukraine side to redirect its foreign policy from Europe to Russia. At the moment, Ukraine fails to meet all the minimum requirements for acceding to the EU, but the possibility of joining the Russia-backed Common Economic Area is opposed by a significant part of the population.

On April 21, 2011, the members of Kyrgyzstan’s parliament sacrificed seven rams to banish evil spirits from their meetings. The money to buy the rams, which cost about $15 apiece, was deducted from the salaries of all 120 MPs. The members did not say whether the sacrifice was effective, but media reports about fights in the country’s supreme legislative body were prominent throughout 2011.

“When it comes to a fool’s dream, my dream [is] a complete ban on alcohol consumption.”Russia’s Chief Sanitary Inspector Gennady Onishchenko, on the prospects of an anti-alcohol campaign

Throughout 2011, Russia’s Chief Sanitary Inspector Gennady Onishchenko has made lots of suggestions on ways to make Russia a better place, including calling parsley a drug, suggesting banning immigrants from Tajikistan, and floating the idea of introducing prohibition.

“This also happens in the Alexander Hall. They serve beef and salad with live earthworms as a side dish.” Former Tver Region Governor Dmitry Zelenin, on a diplomatic reception in the Kremlin

On June 16, 2011, Russian President Dmitry Medvedev removed Tver Region Governor Dmitry Zelenin from his position. Reporters attributed the dismissal to the 2010 scandal in which Zelenin tweeted that he had found a live earthworm in his salad during a diplomatic reception in the Kremlin. Commenting on the Tver governor’s conduct, Presidential Aide Sergei Prikhodko suggested that a new expression should be introduced into the documents assessing governors’ activities: “relieved of duty for acting like a moron.”

“Elderly ladies would love their grandsons to be like me!” Businessman and politician Mikhail Prokhorov, on hist potential voting base

In the summer, billionaire Mikhail Prokhorov became head of the Right Cause party and, in so doing, launched his political career. Although Prokhorov shortly left the party, he later announced his plans to run for president.

“I hope that, in the future, Russia will look like a giant, irrational, metaphysical Canada.” Alexei Navalny, in an interview with the Russian version of “Esquire” magazine

In 2010, Navalny was best known for his struggle against corruption and his blog recording his travails. But in 2011, he became the face of the Russian political opposition. During the Dec. 24 rally for fair elections in Moscow, Navalny lambasted both President Dmitry Medvedev and Prime Minister Vladimir Putin. Experts believe Navalny is the most likely opposition leader able to bring together the diverse movement.

“There are laws that simply discredit the authorities.”Russia’s chief pediatrician Leonid Roshal, on problems within the Russian healthcare system

In April 2011, Russia’s chief pediatrician Leonid Roshal dressed down the Russian healthcare system and the policies of the Russian Ministry of Healthcare. Prime Minister Vladimir Putin responded to the criticism by promising to increase monthly salaries of interns and residents from 60 euros ($77) to 150 euros ($195). In December, Roshal talked to Putin person during his annual televised call-in show.