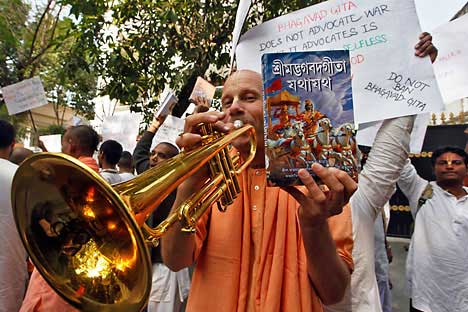 The ruling by the Tomsk city court in Siberia on December 28 to throw out the six-month-old case to ban the holy Hindu scripture Bhagawad Gita, is an unprecedented event of unique importance in the entire history of Indo-Russia relations. Never before such a sensitive case of Indian national heritage came before a Russian court to stir great outrage and anger among the millions of followers of Hinduism in India and around the world to negatively overshadow the unbreakable friendly relations between the two countries.

Tomsk court judge Galina Butenko ruled that there were no grounds to recognize Bhagawad Gita as extremist literature because it is “one of the interpretations of sacred Hindu scripture Bhagawad Gita.”  She, therefore, dismissed the state prosecutors’ petition to ban the book in Russia as “extremist literature,” promoting “social discord” and “hatred” to non-believers.

As the Tomsk court ruling to reject the petition by the state prosecutors to ban the Gita came, both the Indian and Russian sides took a sigh of great relief in view of the extreme “sensitivity” and serious concerns it had generated not only among the adherents of Hinduism in India and over the world, but also in the political elite and the government establishment of the country. It threatened the very foundation of decades-old, time-tested traditional Indo-Russian friendship and bilateral strategic partnership, which recently culminated into a “special, privileged strategic partnership.”

The case threatened to create an unexpected roadblock in the strategic partnership  between India and Russia which have had exclusive military-technical cooperation ties and trade and economic relations since Soviet times. So Moscow was also not less concerned over the ongoing controversy over the Gita ban case in the Tomsk court.

The case filed by public prosecutors before the Tomsk court, against the translation of the Gita text and commentary entitled “Bhagawad Gita As It Is” by A.C.Bhaktivedanta Swami Prabhupada, the founder of the International Society for Krishna Consciousness (ISKCON), was first published in 1968. The prosecutors asked the court to include the book on the Federal List of Extremist Materials, which bans more than 1,000 texts, including Adolf Hitler’s “Mein Kampf.”

The Gita ban issue flared up with full force,bolt from the blue, in India  on December 19, in the wake of just concluded three-day (December 15-17) successful official visit of Indian Prime Minister Manmohan Singh to Moscow for his regular annual summit with the Russian President Dmitry Medvedev. The same day, the Tomsk court was to give its verdict, but the judge postponed the final hearing in the case until December 28 to seek the opinion of the Russian Ombudsman on human rights and of Indologists from Moscow and St Petersburg, all of whom were in favour of the dismissal of the case.

It was ironical that the Gita ban controversy raged in the backdrop of Singh’s visit to Moscow. Fresh from his visit, in New Delhi, the Prime Minister had to face a number of uneasy and embarrassing questions as to whether he raised the Gita ban issue during his talks with his Russian counterparts in Moscow and what urgent measures government was taking to favourably resolve the continuing controversy.

The issue also provided immense grist for the agitated MPs in the Indian parliament. Agitated  lawmakers forced the adjournment of the Lok Sabha (lower house) on December 19 after Biju Janata Dal (BJD) leader Bhartruhari Mahtab raised the Gita ban case in the House, asking the government to intervene immediately to ensure the “religious freedom of Hindus” in Russia.

Each and every MPs cutting across party, caste and religious lines, were unanimous in condemning the petition by the state prosecutors in Tomsk court to ban Gita in Russia as an “extremist” book.

That the Gita ban issue was so serious for the bilateral strategic partnership could well be understood by the fact that among the many MPs who strongly denounced the court case, were Lalu Prasad Yadav (RJD), Mulayam Singh Yadav (SP) and Sharad Yadav JD (U), better known as the staunch supporters of the Indo-Russian friendship. Warning unprecedented serious consequences of the Gita ban case, all the MPs demanded that the government take the matter up strongly with the Russian government.

“We will not tolerate any move to insult Lord Krishna,” said Lalu Prasad Yadav, adding it was a conspiracy against Lord Krishna.’”

Responding to the demands of the MPS, the External Affairs Minister S.M. Krishna gave a statement in Lok Sabha on December 20 in which he said he fully shared the sentiments expressed by the House on the issue.

Krishna’s official reaction came hours after Russian ambassador to India Alexander Kadakin strongly denounced the "neighbourhood madmen" who were seeking to impose a ban on the Bhagawad Gita in Siberia and underlined that Russia is a secular country where all religions enjoy equal respect.

"It is strange that such events are unfolding in the beautiful university city in Siberia, Tomsk, which is famous for its secularism and religious tolerance. Well, it seems that even the lovely city of Tomsk has its own neighbourhood madmen," he said in his statement.

"Russia, as it is known to anyone, is a secular and democratic country where all religions enjoy equal respect," he added.

Kadakin, himself a well-known Indololgist, said Bhagawad Gita is a great source of wisdom in India and the world, stressing that the courts cannot decide the fate of sacred texts.

"I consider it inadmissible when any holy scripture is taken to the courts. For all believers, these texts are sacred,” Kadakin noted.

“The complaint in a local Russian court appears to be the work of some ignorant and misdirected individuals,” Krishna said in his statement in the Lok Sabha.

“While this complaint is patently absurd, we have treated this matter seriously and the Embassy of India is closely monitoring this legal case,” he said.

“We are confident that our Russian friends, who understand our civilizational values and cultural sensitivities, will resolve this matter appropriately,” Krishna stressed.

Krishna had also to make it clear on December 23 that Indo-Russian bilateral ties were not in danger over the continuing controversy surrounding the Gita ban case  in a Russian court.“There is no problem there,” he told the media.

In the run up to the final hearing in the Tomsk court, on December 28, Krishna twice spoke to Kadakin to convey that the Russian government should provide all possible help to favourably and positively resolve the issue.

Indeed, the contribution made by Kadakin to resolve the Gita ban case stands out unmatchable, as the controversy apparently assumed uncontrollable proportion during the last ten days of the pending hearing from December 19 to 28.

The Russian ambassador, one can say without any reservation and bias, had the “diplomatic audacity” to take up the Gita ban issue even somewhat against the Russian Foreign Ministry which held a different view on the entire controversy.

Russian Foreign Ministry insisted that the Tomsk court was not taking issue with core Hindu scripture itself, but rather with the author's commentary and poor translation in "Bhagawad Gita As It Is."

"As regards the classification by the Tomsk court as an extremist material, I will stress that the Russian-language edition of the ‘Bhagawad Gita As It Is,’ with the commentary written in 1968 by A. C. Bhaktivedanta Swami Prabhupada. The work represents an authorized translation of the original from Sanskrit into English. The book was translated into Russian in 1984,” the official spokesman for the Russian Foreign Ministry Alexander Lukashevich told reporters on December 23.

“As evident from the materials available, the admonitions of the law enforcement authorities are not so much about the text of the book proper, whose double translation is not without the sin of semantic distortion, as about the author's comments which were classified as falling under Article 13 of the Russian Federation Federal Law 'On countering extremist activities'," Lukashevich said.

Krishna met Kadakin on the eve of the Siberian court resumed final hearing on December 28 on the petition seeking a ban on the commentary of Swami Prabhupada. This was the second time in four days that the Ministry called Kadakin to convey India's concerns over the sensitive issue. This showed only how much the Indian government was worried over the court case under the immense pressure from the parliament, public and media.

Kadakin was at pains to point out that the Russian government's manoeuvrability was limited but it was trying its best to resolve the issue.

“You understand that it is a court case but the Russian government can do one thing. It can ask the people to express our love and admiration for the Gita. That you can get from anyone in Russia,” he said.

During the meeting at Hyderabad House in New Delhi, Kadakin assured Krishna that the Russian Government will do all it can within its powers.

Kadakin said that he had himself read Gita and that any human being can have only one opinion on the scripture -- Gita is a great scripture and it is a scripture of the world.

The Russian ambassador said his attitude on the issue remains the same that "no holy scripture, whether it is Bible, Quran or Gita can be brought to a court."

The future generations in both India and Russia will for ever remember Kadakin’s positive contribution in resolving the Gita ban issue and saving the India-Russia strategic partnership from irreparable damage.

If Russian Prime Minister Vladimir Putin laid the solid foundation of the bilateral strategic partnership between the two countries during his visit to New Delhi, in 2000, Kadakin during the crisis of such a sensitive nature as Bhagawad Gita ban case in Russia, made every diplomatic effort in his powers to protect it from irreparable loss, threatening its possible collapse.

It is worth-mentioning, in this context, that the Russian ambassador rightly deserves a state Padma Award from India for his historic contribution to resolving the Gita ban case and saving the bilateral strategic partnership over an extremely heated up  sensitive issue for about one billion adherents of Hinduism.

ISKCON itself became a recognized official religious organisation in the Soviet Union in 1988 after the then President Mikhail Gorbachov launched Perestroika.

The history of ISKCON in Russia began in 1971. As CPSU leader Leonid Brezhnev was consolidating his totalitarian rule in the former Soviet Union, Swami Prabhupada visited Moscow for five days to meet Professor Kotovsky, a Soviet scholar and Indologist.

Last November, Indian President Pratibha Devisingh Patil sent a message to the ISKCON on the occasion of its 40th anniversary in Russia.

“I congratulate ISKCON in Russia and hope its followers will continue their service to the people of Russia with the same enthusiasm as before. I extend my best wishes to the worshippers of the Lord Krishna in Russia in connection with this joyous event,” she said in her message.

ISKCON followers linked the sudden court case against the Gita text to the Russian Orthodox Church, which they claimed wants to limit their activities in Russia.

The General Prosecutor’s Office examined the ISKCON literature in 2004 and 2005, however, nothing was found for inciting the “extremism,” “social discord” and “violence” in Russia, during its 40 years of existence in the country.

Yury Pleshkov, the representative of the ISKCON in Russia, did not rule out that the attempt to ban the holy book in Tomsk was the first step towards a total ban of the International Society for Krishna Consciousness in Russia.

“First, they will ban the holy book, then the followers of the Hare Krishna Movement in Russia, will be accused of spreading extremist material, and then they will declare the International Society for Krishna Consciousness illegal,” Pleshkov told the Russian daily newspaper Izvestia, after the Tomsk court rejected the petition to ban the Bhagawad Gita.