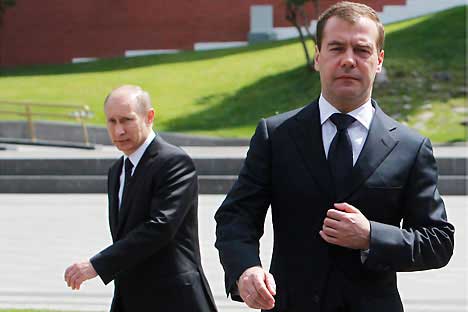 Perhaps unintentionally, President Dmitry Medvedev has cast a pall over the legitimacy of Vladimir Putin's expected coronation as president in March and strengthened the demand of the protesters in Moscow for a rerun of the State Duma elections.

Medvedev's political reforms, rushed without Putin's full endorsement, made it obvious that the Duma is illegitimate and needs to be disbanded.

It is illegitimate because the election results in Moscow were falsified to the extent that United Russia should not be enjoying a parliamentary majority. It is illegitimate because about half of the mandates of the Communist Party and the Just Russia Party are not theirs. They belong to a party that could not be registered for the elections under the rules Medvedev wants changed.

These votes could have easily gone to a party headed by Alexei Navalny since many people who voted for the Communists or A Just Russia did so only because they heeded Navalny's call to vote for any party other than United Russia. Since these voters numbered in the millions and are not represented in parliament, this is another reason the Duma is illegitimate.

Medvedev recognized this by saying the existing draconian party registration rules should be abolished. As he rushed his proposals into legislation, it became the basic demand of the protesters that the new rules should be applied immediately for a rerun of the Duma elections. Russia deserves a truly representative parliament today, not five years later.

Putin could have deftly diffused the legitimacy crisis that is haunting him now by promising in mid-December a rerun of the unfair Duma elections with all new registered parties on the ballot. No one gave him this precious advice.

Now, with Medvedev's reforms rolled out, Putin's presidential election under the restrictive rules of participation will become even more illegitimate. The protesters rightly demand that the presidential vote be postponed and then run anew under Medvedev's rules with new candidates on the ballot. No one in Russia is going to wait six years for democracy — except for Putin.

This could be Medvedev's moment for greatness. With the power of the presidency still at his command, he should call for new parliamentary and presidential elections in 2012 under the relaxed rules for political participation that he proposed in December. This is his last chance to put the interests of the country before his loyalty to one man.