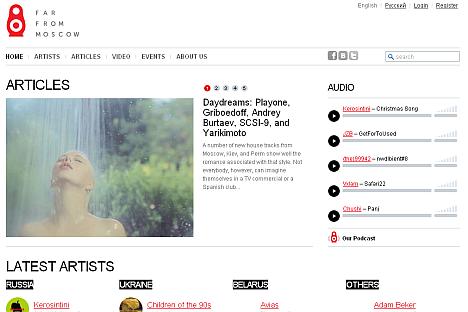 The resource is named after a famous Soviet novel, celebrating the heroic efforts of Siberian oil workers during World War Two, an awfully long way from comfort or safety

“Far from Moscow” is a free resource designed to promote, catalog, and consider new music from Russia, Ukraine, and Belarus, together with the Baltic nations (Latvia, Lithuania, Estonia).

The “Far from Moscow” project is compiled by David MacFadyen, a British import to Los Angeles. He recently spoke to Darya Gonzales of Russia Beyond the Headlines about how he discovers new musical pearls – ones that Russians sometimes miss themselves.

Russia Beyond the Headlines: How do you select the music for the website FarfromMoscow.com?

Davide MacFayden: Originally I had to search for the music myself during many trips to Russia. It took a great deal of physical effort, but now an enormous amount of material is available online, and due to the success of the webpage, much of the content is actually sent to me. There is a constant flow of audio files between L.A. and Moscow.

Unfortunately, though, everything on the site is written by me. It would be wonderful if the project was completely bilingual, but that’s physically impossible. It takes all my time to do things in English. I tried to work in two languages last year, but it meant that everything slowed down by 50 percent.

I have been doing this for 3 years now, and the site remains noncommercial. It’s a cultural exercise.

The biggest problem of all is that Russian and Slavic music doesn't have an obvious “center.” People don’t know where to look. In addition to the site itself, I’ve started to put together some compilation albums. The next logical step would be a regular podcast, maybe streaming audio, that kind of thing. There need to be more ways to give people regular access to new sounds.

I see different possibilities for the future: either doing something in Russia connected with the site or with a club in the summertime. Another option, of course, is to bring bands to the U.S. That can be difficult for traditional rock groups, which involve a lot of people and equipment, but as for electronic music or a DJ, then sure: why not? We often see Russian bands and singers in LA, like t.A.T.u., Mumiy Troll, Zemfira, Kristina Orbakaite, Alla Pugachova.

If you ask someone in the West if they want to hear “Slavic music,” they usually imagine folk music. There’s one Russian promoter in Berlin who’s managing a pretty good flow of Russian and Ukrainian artists to Germany; she says that same “folky” issue is both a plus and a minus. It’s much easier to promote bands with a connection to tradition, but it’s also very hard to escape those clichés.

RBTH:What do you think about the copyright situation in Russia?

D.M.: It’s difficult to say. I don’t see how piracy can be stopped unless somebody invents a magical, technical way of doing so. Because of piracy’s effects, bands have to tour constantly. That may sound very romantic, but in Russia, where distances are so big, it’s often impossible to do so. Musicians repeatedly complain to me that local promoters are difficult to find: you don’t know who is reliable outside of major cities, and finding accommodation is equally tricky. A lot of regional clubs are also badly behaved: They may, for example, promise you a certain percentage, so you play the concert - but then get nothing.

I work as a professor here in Los Angeles, at the University of California, so I teach a lot of classes related to literature. Literary production is going through the same problems as music. By way of illustration, a lot of popular novels appear in stores, but somebody somewhere will immediately scan a copy, turn it into a PDF, and put it online. It’s almost impossible to make a reasonable career from literature; things are returning to a kind of “salon culture” as in the early 20th century: small readings, small coteries.

Online concerts could become a solution. People could agree on a certain viewing time and the performance would take place “live,” but online. In the U.S., for instance, people are starting to watch ballet and opera in the cinema. Let's say there’s an opera in New York, but it’s viewed simultaneously in Detroit – people put on their finest clothes and go to the movies! For the same reason, international football games are also shown in theaters: audiences get a much better sense of the spectacle. Russia faces lots of these media challenges. For those same reasons, I don’t understand why state media does nothing to help young artists. The BBC offers a very good example to follow. After primetime shows, most of national pop scheduling in the evening is given over to young musicians and local performers. No one needs that system more than Russia. You have to start with something.

What I see are wonderful little blogs all around the country designed for different styles of Russian music, whether it’s techno or folk, but they remain small and typically don’t collaborate. Then, of course, there’s a second issue connected to radio stations. They tend – on the American example – to choose one narrow genre and not mix styles. As a result, the surprises are few and far between. Publications don’t collaborate and styles don’t combine.

It’s all rather strange, because even in the Soviet Union, you needed a classical education in order to build a career in popular music. Pop songs became part of nationally significant and prestigious music-making, yet now those styles have been abandoned completely.

RBTH: Do you imagine Russian groups gaining popularity in Europe or the U.S.?

D.M.: Yes, but a lot is determined by the genre in question. The more a style is connected to a given language, the harder things will be. The worst example would be something like rap or hip-hop; I don’t see how something so linguistically complicated could survive in an international market. The best chance might be for dance music or wordless electronic genres, perhaps. I already see a lot of international net-labels within electronic music inviting Russian performers. In those cases, geography doesn’t really matter, but those projects still don’t involve truly commercial music. It all remains on a modest scale.

There are some Russian electronic artists who live and work here in LA, but a lot of instrumentalists, both here and at home, have given up; they see no hope of making money from their craft, so they start writing incidental music for advertising, computer games, TV series and so on. That’s something we have already seen in the West, with people like Metallica writing songs for computer games. It’s an option, but not the best.

RBTH: What’s has been the most memorable Russian concert for you?

D.M.: Something rather strange, actually: it was outside of Russia altogether. My brother lives in Toronto and I went to one of Alla Pugachova’s concerts there. An entire generation of émigrés was present, folks in expensive furs and enormous jewelry who hadn’t seen their favorite star for 30 years. That was absolutely remarkable. Everyone was dressed as if it was the last party of their lives! They made one heck of a noise.

RBTH: Foreigners in Russia often go looking for traditional sounds, such as the balalaika, but increasingly they are astonished to discover contemporary bands. How do you strike a balance between those rural roots and urban trends?

D.M.: Here the issue of geography returns again, in that “provincial” musicians sometimes feel themselves far from anything modern or stylish. Performers, therefore, frequently don’t want to mention their address. They actively hide it. It’s as if homelessness creates an ability to sidestep clichés and stereotypes. Whenever a rural or provincial artist moves to Moscow, though, then all of a sudden all their social profiles refer to “Moscow.” In the long term, that’s clearly not a good way to work. There needs to be an equal balance between urban centers and the “periphery,” between the future and the past. So there’s plenty of work ahead of me.