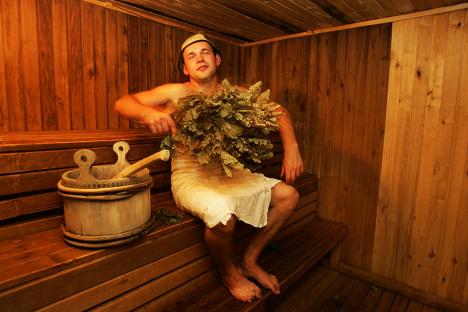 Being "beaten" with twigs is an essential part of the banya experience. Source: ITAR-TASS

Well-muscled and menacing at first glance, former Soviet soldier Pavel Dukhin might be the last person you’d want to have beat you with tree branches, although that is exactly what his job is.

A resourceful immigrant to Canada, he now works as a manager at a landfill. In his spare time, Pavel bulldozes gravel and chops down trees on his multihectare property in Langley, a Vancouver suburb. Even with his biceps covered and the chainsaw turned off, “Pasha,” as his customers call him, does not create the impression of being a pushover.

What keeps drawing the much less burly Vancouverites to visit Pasha is the Russian banya he has built in his yard.

Among ex-Soviet immigrants in North America, Dukhin is a member of the fortunate minority who own their own banya, while others can only pine for steam and curse common shower stalls for their inadequacy. But things are looking up. As more and more emigre entrepreneurs open commercial banyas across the continent, Russians and locals alike are lining up to revel in the ancient tradition.

Dukhin did his military service on a top-secret missile test range in Kazakhstan and later became a tenacious businessman in the Moscow region, plowing his way through post-Soviet crime and corruption. When he first came to Vancouver eight years ago, a Russian friend invited him to go to a sauna on the top floor of a high-rise apartment.

“There were probably other Russians living in this building because someone had ripped out the thermostat,” Dukhin said. “Usually you’re not supposed to have temperatures of more than 80 degrees [Celsius]. We went to 100.”

The banya tradition dates back to the 11th century in Russia. A small room — traditionally a wooden log shed, but brick structures and even modified closets will do in a pinch — is heated by an electric or wood-burning stove to well over 80 degrees. Copious amounts of water poured on the heat source bring the humidity up to about the same level. A visit to a banya begins with several rotations in and out of the steamy room to allow the body to warm up. This cycle culminates with banya aficionados beating each other with bunches of birch or pine branches, called veniki, as a form of massage. Depending on the bravado of the participant, the event could wrap up with a plunge in cold water or a roll in the snow.

Dukhin decided to build his own banya when he moved to a large land plot in 2007. His budget was tight, but he managed to get some free deals online. His friends also helped out for the noble cause. They carted in furniture and one friend even supplied the flooring.

A half-year after moving to the property, Dukhin was steaming in his own banya. He started inviting friends over as soon as he had the roof up. Gradually the banya turned into a side business. A visit is priced at $150 for three hours regardless of how many people participate. The price includes a veniki beating for two, and you get to take the bunched branches home with you as a souvenir.

This banya in Langley is one of the many commercial banyas that are now open in Canada and the United States.

The Russian bathhouse on Gravesend Neck Road was built in 1979 and is the oldest in Brooklyn, New York. On average, about 250 guests stew there for three to four hours on the weekends. During the week, there are banya sessions for young people. Students can be seen doing schoolwork in between stints in the heat.

“The idea was right,” said owner Israel Odessky, of his decision to open a communal banya. “A Russian person loves the banya. … It means relaxation. It is something for the soul.”

Anatoly Goldshmid went to banyas in Ukraine since he was 3 years old, and continued the routine even after he immigrated to the United States.  Each Saturday for 25 years he drove for several hours to get to one of the New York City banyas to keep his date with a twig bouquet.

The move to Dallas left Goldshmid feeling unsettled. There were no banyas around.

Working with urgency, Goldshmid set out to build his own banya and within weeks had a reasonable facsimile operating in his house. Five years ago, Goldshmid put up a banya complex in a Dallas suburb, which remains the only communal Russian banya in the American Southwest.

The banya business is also spreading in other directions. Alexander Orlov, a Kiev native who now lives in New Jersey, sells veniki across the East Coast as well as to Texas and Canada. He has built a cedar banya in his house and takes orders to build banyas for expatriates from the former Soviet Union who have settled in North America.

“I can’t live without a banya,” Orlov said.

The Melting Pot of Clients

Dukhin sent letters to two Vancouver Russian-language papers when he opened up his banya to outside visitors. One of the papers replied with just one word: “cool.” Then it published the ads.

But the advertisements didn’t bring in as many people as Dukhin expected. The most effective strategy for him has been word-of-mouth.

Most commercial banyas still rely on this tactic.

“It is very hard to write on paper what is a Russian banya,” said Goldshmid, who advertised his Dallas-area banya on the Internet and in local papers.

It can also be hard to prove what the Russian banya is not. James Schoenfeld, a regular customer at the Russian & Turkish Baths in downtown New York City said that a ‘bathhouse’ can easily be linked to illicit behavior.

“If they say ‘we’re going to a bathhouse,’ someone will raise an eyebrow,” Schoenfeld said, adding that word-of-mouth exchanges can prevent such misunderstandings.

Schoenfeld went to his first banya with a friend and enthusiastically dived into all steps of the process, including a 30-minute oak-leaf venik lashing. Shortly after jumping out of the ice pool, Schoenfeld went to the banya’s front counter and bought a card for 15 more visits. He now goes to the Manhattan banya twice a year and has even convinced his girlfriend to join him.

“It was a nice test,” Schoenfeld said. “Any girl who is willing to try this has to be pretty cool.”

Westerners with a thirst for exploring other cultures are displacing the Russians as the top customers in many banyas. In fact, 90 percent of the clientele at the Wall Street Bath in the financial district of Manhattan is not natively Russian. Its selling points include two steam rooms, Russian-language posters and a restaurant that sells borsch and solyanka.

“We taught the Americans how to steam,” manager Dmitry Lerner said. “They steam now better than the Russians.”

Legions of hockey fans flooded Odessky’s bathhouse in Brooklyn in 2000 when Sergei Nemchinov brought the Stanley Cup trophy in for a day.

Odessky has a photo of himself kissing the cup and is only too happy to give a guided tour of the signed hockey jerseys that hang on the walls: Kovalyov, Morozov, Ovechkin, Semin, Fyodorov and other high-profile athletes who had come in to be warmed and lashed.

Even in his small banya, Dukhin maintains a steady stream of customers.

To increase authenticity, Dukhin undergoes a costume change before he serves his clients. He puts on a Soviet-style hat with a star on the front and claps two flower-embroidered kitchen mittens together to hustle his client, Igor Zemtsov, into the heated room. Dukhin follows him in with a wooden bucket of hot water in which two veniki soak in preparation.

A few minutes later the only sound that can be heard is the whipping of the twigs as they hit Zemtsov’s body.

“The most important thing is that you don’t get cold,” Dukhin teases as the beating intensifies.

Zemtsov emerges from the room with steam rising from his body and a relieved smile on his face. He embraces Dukhin as they say goodbye and thanks him for ridding his body of its aches.

“Tomorrow he’ll tell me that he is thinking about me,” Dukhin chuckles as he watches Zemtsov drive away. He is sure this won’t be Zemtsov’s last visit.

First published at the Moscow Times.