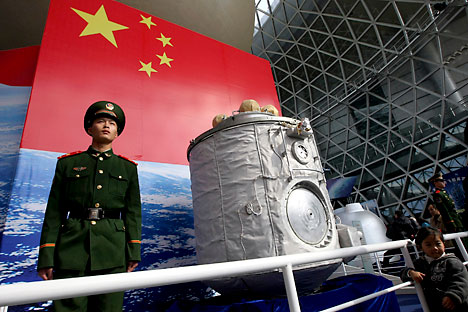 NASA has ended its Shuttle program. Now, China has announced its ambitious plans in the space industry to do many of the things that the US and Russia have done earlier in their space programs. Dr. Joan Johnson-Freese, a Professor of National Security Affairs at the Naval War College in Newport, Rhode Island, believes that, although the Chinese have all the precursors in the works, they don’t have an official program for a human lunar mission yet.

NASA has ended their space program. Do you think that China’s attempt to make it into space is symbolic to America?

I would characterize it differently. I don’t think NASA or the US has ended its space program. We are simply in a hiatus to take a different direction with a new space launch system. We’ve ended out Shuttle program. However, China has a very aggressive and very ambitious space program to do many of the things that the US and Russia in their space programs have done earlier. And I think they’ve certainly showed their political and technological commitment to follow through on their goals.

Again, the Chinese are doing many things that the US has already done, and I think we wish them the best in their potential lunar plans. I would point out China has not announced plans for a manned lunar mission. They certainly have all the precursors in the works but they don’t have an official program for a human lunar mission yet.

Recently, news media have reported that America’s X-37B space plane is “probably spying on China’s recently launched space lab Tiangong-1. Do you think this indicates that the Americans are afraid or they are looking at China suspiciously? Or they don’t know what will happen?

The X-37B is a testbed technology. It’s looking at many different opportunities, and I imagine a part of that is reconnaissance in space. Whether or not it is specifically aimed at Chinese assets or not would be purely a speculation. But it’s important to remember that over 95% of space technologies is tool use meaning a value to both the civilian and military communities. That makes it very hard to know intentions. I think the US is concerned and very attentive to what are Chinese ambitions and intentions in space because quite frankly they have not been very forthright in areas other than human space flight. So, I think, with good reason, the US does pay attention and what the Chinese are doing in space.

Russia seems to be the only other country besides America that can go into space and has the facilities to go into space. Why is China doing this now?

I think China has very carefully watched the benefits that both the US and Russia have garnered from space, both in terms of economic development, civilian and military assets. And they want to reap all the same benefits. I have often said the Chinese have read the Apollo playbook. They know all the benefits that they can get from human space flight. They have seen the benefits that both the US and Russia get from military space assets and there is a lot of geopolitical prestige to be garnered from their effort. So, I think they are doing that for many reasons, all of which have been very positively reflected on.

Are there economic and scientific benefits of going into space?

I’ve heard a Chinese professor tell me, for example, that going into space will demonstrate that China economically is capable of doing that making knock-off designer clothes or sneakers. It shows its technical prowess that they haven’t demonstrated prior. And I would point out that the Chinese white paper on space that was released just very recently puts space primary motivation as economic development. They have long said space is an avenue of national economic development for them.

In 2009, Air Force Commander General Xu Qiliang caused quite a stir when he said the armed forces should prepared for the inevitable military action in the outer space. Do you think about this?

There has been a lot of rhetoric on all sides about whether or not space warfare is inevitable and I think it’s important to point out that there are different missions in space and space has been militarized for a long time. whether or not that actually means combat in space is very unclear. I think that it’s just primarily used as rhetoric. I don’t put much credence in those kinds of statements.

Do you think it’s possible at all?

Of course, it’s possible. I think the US, Russia – we both have anti-satellite weapons; China and India are both developing them. But I think all sides would like to see restraint in that area because use of an asset only creates space debris that pollutes environment for use by anyone.