From Bollywood to Bharatnatyam 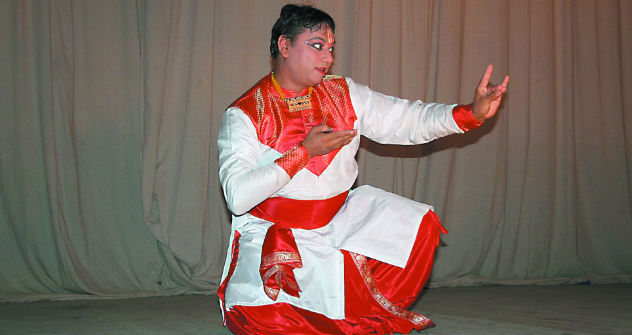 Khatak guru Ashwani Nigam: dance is a way to God, to perfection.

Three decades ago, it was mostly Bollywood dance that captivated Russians. Now, classical dance forms like Bharatnatyam and Kathak are also casting their spell.

Indian dance set its nimble feet on the Russian soil in the 1980s, after a decade of the Indo-Russian bhai-bhai in politics and a great many films and music that flooded the Soviet Union in the 1970s. Inspired by Indian films such as “Disco Dancer” or “Dance Dance”, the first studios teaching Indian dance began finding their feet in Russia around that time. In September 1996, Guru Ashwani Nigam was sent by India’s Ministry of Culture to teach at Jawaharlal Nehru Cultural Centre. Mr. Nigam, the founder of Tarang Theatre specialising primarily in Khatak, recalls how one of the first Indian dance schools in Russia in 1980s was “White lotos” founded by Galina Das Gupta. Most dance collectives at that time taught just dance from films, which have nothing to do with Indian classic dance. “This was a hard time for the enthusiasts, with the lack of dance costumes and very rare opportunities to travel to India and meet local dance gurus,” recalls Natalia Obolenskaya, head of the “Saraswati” dance studio specialising in Bharatnatyam. "We sewed the costumes ourselves, we made adornments for the performances from tins and metal things. But it was fun.” Starting in 1994, Natalia studied in New Delhi for a long time under the guidance of Padma Sampath Kumaran, an eminent Bharatnatyam teacher whose Russian students have gone on to win top international prizes. Natalia feels living in India and learning from an Indian guru gave her a profound insight into this dance form.

Dancing her way to Russia

Padma Sampath Kumaran, an eminent Indian dance teacher, was born in Chennai and began to learn Bharatnatyam at the age of 5. The encouragement she received led her to believe that dance is her destiny. Her conservative family at first did not quite approve of her passion for dancing. But Padma's paternal uncle, a liberal-minded person, helped her to learn from the legendary guru, Chokkalingam Pillai. After her marriage, Padma started teaching Bharatnatyam dance with active support from her husband. She founded Nrityam Cultural and Dancing Society. In New-Delhi, a lot of Russian students came to learn from her and were entranced by her techniques. She learnt the Russian language quite fast to teach Bharatnatyam to Russians. She was honoured with the Russian state award for her contribution to the development of the Indo-Russian relations on November 4 this year. Padma Sampath Kumaran visited Russia and was deeply impressed with the elegance and vigour, synchronisation and perfect positioning of the Russian folk dance and ballet.

“It elevates my mind to divinity. An array of thought-provoking themes makes me feel the fullness of life,” says Padma while trying to explain why Indian classical dance captivates people from all cultural backgrounds. “In our culture, dance is a way to God, to perfection, to admitting and controlling oneself. Very often, people’s hands and legs are like ice, and then they begin to dance and feel as if they are reborn,” says Mr. Nigam.

Besides classical dance, there are a lot of dance studios in Russia teaching Bollywood dance and even modern Indian fusion and new age dance. Anjali, a Russian dancer, studied choreography in India for two years and managed to master Bollywood dance. She prefers to use unconventional methods, mingling moves from Flamenco into Indian music or setting Indian dance moves to Latin American music.

But while the Indian dance is catching on in Russia, it has a long way to go. Scarce financing and a lack of facilities, says Ashwani Nigam, are key obstacles. The cost of renting a room is high and there are other expenses for organising dance classes, contests and festivals. He hopes for more support from the Russian and Indian sides to promote Indian dance in Russia. Nigam feels that although Indian dance is blossoming in Russia, and there are about 270 different dance collectives in Russian cities and towns, most of them teach Bollywood dance and not classical ones. “It’s understandable,” smiles Nigam. “Profound study of the classical Indian dance can take upto six years whereas Bollywood dance can be learnt in six months. It's like comparing ballet to club dancing.”

Nigam is quite impressed by great flexibility and precision of movements Russian students exhibit, which often surpass their Indian peers in technique. But there is a bit of cultural disconnect. “Expressing emotions through dance is often a challenge for Russians because this demands feeling a strong affinity with the Indian culture and religion, and it’s hard for those who were not born there,” says Nigam.

Padma Sampath Kumaran, however, differs. “In fact the difference in culture creates eagerness to know the differences and absorb the same speedily,” she believes. Padma has Russian students who, she feels, have managed to cross the cultural boundaries with ease. She gushes about the sheer dexterity of Natalia Obolenskaya, one of her students who has taken the Bharatnatyam dance to a higher trajectory. “Natalia is more of an Indian than a Russian when she comes to perform Bharatnatyam. Sometimes, I wonder whether she was an Indian in her previous birth.”

" As a Russian, I didn't know much about the Indian dance culture before. But several years ago, I felt drawn to this country and was keen on learning more about it. Visiting an Indian classical dance concert impressed me very much and inspired me to find a Bharatnatyam dance studio in Moscow. For me, the rhythm of the dance is very important, and the rhythmic system of Indian classical dance is much richer than other dance forms. And the Indian music represents the whole system of knowledge. It's an endless process of learning.

" I've lived in Moscow ever since my birth but nevertheless Indian dance plays an important role in my life. I started studying classical Indian dance forms when I was seven. At the moment, I am learning several forms simultaneously - Bharatnatyam, Kathak, Kuchipudi and Nota but it's not confusing for me. For me, studying Indian dance is important because I am an Indian, and this is a part of my culture. It helps when people keep in touch with their cultural legacy even if they live far away from their home country.

" I had always wanted to study Indian classical dance. It's like theatre in many ways. There are so many characters, so much acting and pantomime. Through my Bharatnatyam dance classes, I began to understand India much better, and I realised how much the Indian mentality differs from the Russian. After my trip to India, the dance became vibrant and real. I learnt not only to imitate the movements of the dancers, but also to feel the emotions expressed in the dance.

" My mother is Russian but my father's Indian which is why, even though we live in Russia, my parents followed the Indian tradition of teaching their children classical dance. This is how I began learning Kathak as a child. But as I grew older, I got interested in the history of the dance. The Indian classical dance helps me to learn more about India, but for me, it’s more about mastering a special skill that a few people possess rather than keeping in touch with my culture.