India-Japan ties set for an upswing 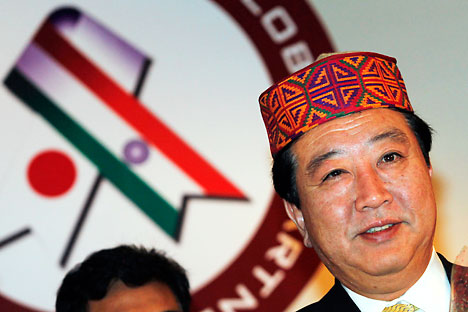 Japanese Prime Minister Yoshihiko Noda’s maiden visit to India towards the end of December last year imparted a fresh momentum to strategic and economic ties between two of Asia’s largest economies. This year (2012) marks the 60th anniversary of the establishment of diplomatic ties between India and Japan.  In order to increase the people-to-people relations, India had introduced a visa on arrival scheme for Japanese tourists with effect from January 1, 2010.  On the other hand, Japan would be inviting approximately 600 Indian youth under the new “Kizuna (bond) Project” to showcase Japan’s revival after the big earthquake of March 2011.

One of the most important outcomes of the Japanese leader’s visit to India was the decision to increase the bilateral currency swap arrangement from $3 to $15 billion, an important step that could help arrest the downslide of Indian rupee against the US dollar. Seeking to scale up economic ties which received a big boost after the Comprehensive Economic Partnership Agreement (CEPA) entered into force on August 1, 2011,   Noda announced $4.5 billion for the landmark Delhi-Mumbai Industrial Corridor project. Some of other important decisions taken during the visit included launching a ministerial-level economic dialogue, stepping up talks for a social security pact, collaboration in high-technology trade and rare earths, and increased cooperation in developing high-speed rail networks in India.

Japan has been playing a major role in boosting India’s infrastructure. It must be mentioned here that since 2003-04, India has been the largest recipient of Japanese Official Development Assistance (ODA) with the total Japanese ODA to India till July 2010 standing at yen 3.3 trillion. During this landmark visit, Noda announced Japan’s intention to provide the DMIC (Delhi-Mumbai Industrial Corridor) project, funds totalling US$4.5 billion in the next five years.

In another significant step, Indian and Japanese companies would jointly produce and export rare-earth metals. It must be mentioned here that when some Chinese trawlers had rammed into Japanese Coast Guard vessels near the Senkaku islands, China had unofficially stopped the export of rare-earth metals to Japan, which are used by many Japanese firms.

India and Japan also reiterated their commitment to the principles of international law, including the landmark 1982 United Nations Convention on the Law of the Sea (UNCLOS).   This assumes significance in the light of maritime spats between Japan and China. Lately some quarters in China have also protested against India’s oil exploration attempts in the South China Sea(off the coast of Vietnam), but the Indian government has promised to press ahead with the project.

Japan is the world's second largest net importer of oil, most of which originates in the Middle East. India’s role in ensuring the security of Japan’s oil supplies is crucially important since it has the most powerful navy in the Indian Ocean region. Of late, piracy has become another serious problem and the Indian Navy has been at the forefront of the fight against piracy.  Japan and India are also part of the Regional Cooperation Agreement on Combating Piracy and Armed Robbery against Ships in Asia (ReCAAP). The Indian Coast Guard and its Japanese counterpart will be holding joint exercises later this month.

India’s growing ties with the US has helped to bring India closer to Japan. It must be mentioned here that in 2007, the US, India, Japan and Australia had tried to form a “Quadrilateral Initiative”, but it failed to take off, reportedly under the Chinese pressure. Japan and India also share common interests in forums like the East Asia Summit. With the inclusion of the US in the East Asia Summit, there will be even more opportunities for collaboration between India, Japan and the US. The three countries held their maiden trilateral dialogue last month.

One of the highpoints of the Japan-India relationship has been the commitment shown to the relationship from both sides, despite the change of prime ministers on the Japanese side. The two countries have held three rounds of negotiations on a civil nuclear deal, but the talks stalled after the Fukushima Dai-ichi nuclear disaster in the aftermath of the Great Tohoku earthquake of March 11, 2011. The talks during Noda’s visit indicate that the negotiations will be revived soon for concluding a nuclear deal with Japan that is critical for India to implement its nuclear deal with the US as top American nuclear companies are partially or completely owned by Japanese multinationals.

With the US winding up its operations in Iraq and planning a phased withdrawal from Afghanistan by 2014, President Barack Obama has unveiled a new geopolitical focus on the Asia-Pacific region.  As two of the biggest powers in the Asia-Pacific, India and Japan have a critical role to play in ensuring peace and stability in this region.

Dr Rupakjyoti Borah is currently a Visiting Research Fellow at the Japan Institute of International Affairs, Tokyo and an Assistant Professor of International Relations at Pandit Deendayal Petroleum University, Gujarat, India. The views expressed are personal.