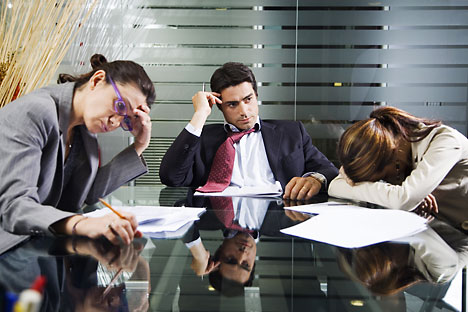 One of the best “fringe benefits” of working in Russia is the 12-day long New Year Holiday. It is against the country’s labour code to make an employee work between December 31 and January 10. While the holidays are a wonderful time for toasts and social gatherings, getting back into the work groove tends be a real challenge.

Many parts of the world have an informal vacation period, when business activity comes to a grinding halt. Western Europe is unofficially closed in the last 2 weeks of August, when the weather is at its best and it seems like the whole part of the continent is at a Spanish or Italian seaside resort. In Russia, the “official” break comes at the start of the year, when temperatures are at their coldest. While many Muscovites make a beeline for Turkey or Goa, most Russians celebrate the long holiday at home. Following the New Year Celebrations is the Orthodox Christmas, which unlike in the West, is not a commercialised holiday. The toasts, of course, continue through the next fortnight, until the celebration of the Orthodox New Year on January 14.

There isn’t a better time to be in Moscow than the middle of January.  The city looks almost abandoned, as a large section of the populace has headed south, like migratory birds. Even the offices of the multinational companies seem to be empty. I recall a visit to the office of a leading international wire service one January, when you could literally hear a pin drop. If this is what happens in the “white collar” world, imagine the impact of the long lay-off on the working class?

The figures released each year by the Russian Federal Statistics Service show a 20 to 25 percent drop in the industrial output from December to January every year. Alarmed by these numbers, Dmitry Medvedev, in his first year of presidency, spoke of curtailing these holidays, but such a decision would have had disastrous consequences for his popularity ratings.

7 time zones away from Moscow in Sakhalin Island, one human resources executive working for a multinational company once complained to me about how employees, who had the right to 45 days of paid leave (as is the case in some Russian provinces), would club on a vacation right after the New Year break! “From December 25 till the first week of February, there won’t be a trace of these people,” he said.

The executive also lamented what he called “ridiculous” holiday pay to keep some of the activity in the oil and gas industry active in January. Ridiculous is how I would put the cost of getting employees of the printing press to work during the break. I once had to tell an irate Scottish reader that we couldn’t publish our weekly newspaper since the printing press would be closed until the end of the holidays.

Then there are those who wouldn’t even work for extra pay during the break. There was a major snowstorm in Yuzhno-Sakhalinsk this Orthodox Christmas and it took 3 days to clear the mounds of snow off the roads. “Why complain, everyone is on holiday anyway,” was the response a close friend received, when she called the authorities to see what was being done. She was told to watch an old Indisski (Hindi) film on television!

Sakhaliners go on a hibernation mode after the New Year. Once the last New Year tree is taken down and the decorations go off the display windows, the streets look abandoned and outdoor activity comes to a standstill. Of course, there are the adventurers that go on winter hikes, ride snow-mobiles and take up other activities like cross-country skiing, but for most people, this is siesta time. It’s only in March with Maslenitsa, a festival with pagan origins to invite the spring, do most people wake up from the winter slumber.  From my personal experience, I can certify that it’s only around the first week of February that there seems to be a semblance of normalcy at the workplace.

No article on the Russian New Year break would be complete without a tribute to the unsung heroes in the country who work during the holidays. These include hospital staff, police, employees of utility providers and those working for the emergencies ministry. At a time when it looks like the “whole world” is celebrating, these are the people that ensure that homes stay warm, the sick are looked after, that there is law and order and those in danger from the elements are rescued.