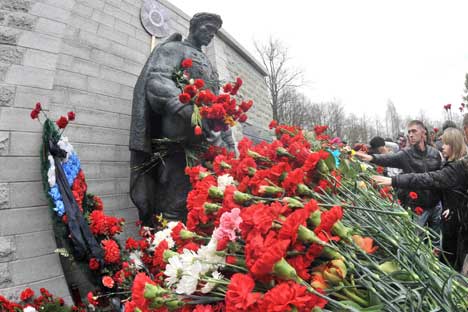 The decision to remove the Bronze Soldier in Tallinn fuelled public indignation within the Russian community in Estonia. Source: ITAR-TASS

How do political prejudices affect the cultural heritage of the former Soviet republics?

When systems fall, so do statues. Among the first “victims” of the revolutionary changes that swept Eastern Europe and the Soviet Union after 1989 were the country’s monuments to the men and mission of communism. Images of a fallen Felix Dzerzhinsky, founder of the KGB, on the streets of Moscow in August 1991 illustrated the scale, and irreversibility, of the Soviet collapse.

And it was emblematic of a process that had begun two years earlier in Eastern Europe with the wholesale toppling of the Hammer and Sickle and sundry Soviet leaders set in stone.  In Poland, these former icons were replaced with newly sculpted monuments to John Paul II, the Polish pope who is credited with playing a decisive role in the fall of communism.

The Polish sculptor Marian Konieczny told me that today Poland has more monuments to the Pope than it had to Stalin in the early 1950s. “And that is good,” said Konieczny. “After all my friends and colleagues are able to make extra money.”

When in November 2011 I saw a photo of the unveiling ceremony for a monument to former U.S. President Ronald Reagan in Warsaw (a well-made and fetching bust) it was just one more indication that a new history is ascendant, and new heroes have replaced the fallen ones. Poland has clearly made its choice about the values and the path it is moving on.

But elsewhere things didn’t go as smoothly as in Poland. In Estonia, the decision to remove a monument to the Soviet soldier– the Bronze Soldier — led to a wave of protests from the indigenous Russian-speaking community, and street riots in Tallinn.

An unveiling of a new monument to the Ukrainian nationalist leader Stepan Bandera in Lviv was condemned by those who continued to bridle at his cooperation with the Nazis. While Bandera was a victim of Communism, assassinated in Germany by the KGB, he was, to many, a terrorist and a collaborator. Local backers of the monument were forced to protect it around the clock. And the dispute captured some of the political tension between Western and Eastern Ukraine with former President Viktor Yushchenko celebrating Bandera while his successor, Viktor Yanukovich, stripped Bandera of the title “Hero of Ukraine.”

In 2010, Georgia announced that it would destroy the monument to the Fallen Soldiers of the Great Patriotic War (1941-1945), which was created by the famous Georgian sculptor Merab Berdzinishvili. That denuding must be seen in the context of the Russian-Georgian war and continuing tensions between the two countries. Some officials in Moscow suggested moving every last stone of Berdzinishvili’s massive creation to Russia.

These ongoing battles over monuments are representative of larger struggles over values within and between societies. Russia is still very much tied to the memory of the Great Patriotic War, which the Kremlin employs as an emotional and unifying force. The government of Georgia, on the other hand, has decided that even its own heroes in World War II are too closely identified with Russia to be tolerated. Stalin remains something of an exception to anti-Kremlin sentiment in Georgia, and his intact image in the city of Gori must have stopped a couple of invading Russian troops in their tracks in 2008.

The uproar over the removal of the Bronze Soldier in Tallinn was also an argument about history – the monument was depicted as a symbol of the Russian occupation after World War II not the expulsion of the Nazis by the Red Army. And it became a flashpoint over two competing views of a war record—whether fighting with the Germans was a matter of shame or a necessary anti-Russian tactic, and whether the ordinary Soviet soldier could enjoy any honor in Estonia, given the struggle against Nazism.

A statue of Josef Stalin is dismantled at his home town of Gori, 80 kms (50 miles) west of the Georgian capital Tbilisi, Friday, June 25, 2010. AP photo

By contrast, in reunified Germany, not a single monument to Lenin or the Soviet soldier was destroyed. The German authorities reached agreement with their Soviet counterparts to protect monuments. And even without the agreement there was no public demand that they be taken down.

The Germans, perhaps, saw some historical and educational merit in preservation. Indeed the similar aesthetics in the monuments of Soviet and Nazi sculptors is somewhat revealing of the common evils in the two systems. In Berlin one can still see a large monument to Lenin in the eastern part of the city and the statues “Decathlon Athlete” and “Winner” made by Arno Breker on Hitler’s commission for the Olympic Games of 1936.

A new Holocaust memorial near Potsdamer Platz is an indication of the narrative adopted by today's Germans. Yet in Berlin’s cultural space there is no conflict between deeply contradictory sculpture that offers radically different windows on the past.

When monuments fall, they are mourned by their creators. Lev Kerbel, who built the last homage to Lenin in Moscow, complained to me that the banishment of his sculptures to distant stone cemeteries deprived the public of major works of art.

Kerbel was a favored artist in the Soviet system. He began his career in the Northern Fleet making portraits of wounded pilots and sailors. With Stalin’s patronage, Kerbel became an official sculpture across the Soviet bloc making monuments to Soviet soliders along with friends and competitors such as Nikolai Tomski, Yevgeniy Vuchetich, Vladimir Tsigal and Georgi Motovilov. His work stretches as far as Cuba, and in 2005 I accompanied a U.S. Senator to his workshop. He left with a few pieces to take back to his home in New Mexico. And several of Kerbel’s public sculptures also survive simply because they are so hard to tear down; he liked to work in granite.

Kerbel would relish the fact that last year, the city council in Ufa, a city in central Russia, voted to restore a monument to Lenin. And strangely, a year earlier, in the Polish town of Poronino, where Lenin spent some time before the 1917 Revolution, the authorities renovated a statue of the first Soviet leader that had been destroyed in 1989.

“It is the only way we could attract Russian tourists,” said the mayor of Poronino.