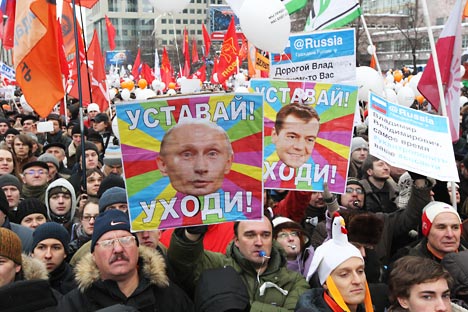 Is Russia heading for an Arab Spring-like movement? Can recent protests in Russia lead to a change of regime? Despite an outpouring of discontent, Vladimir Putin looks set to return to the Kremlin, but he must embark on ambitious reforms to retain his popularity, says Nivedita Das Kundu.

The recent spate of mass protest rallies in Moscow and other Russian cities over the alleged vote fraud in favor of Vladimir Putin’s United Russia Party at the December parliamentary elections has triggered speculation that Russia is headed for an Arab Spring-like movement. Some commentators also speculate whether a foreign power is backing these mass protests to engineer a change of regime in Russia.

While a few analysts dismiss the possibility that this wave of unrest could impact Putin’s plan for returning to the Kremlin this year, many do take seriously the prospect of an Arab spring-like fervor spreading to Russia and its nearby states.

Leaving aside the question of whether this movement would be good for Russia or not, it is more important to know the likelihood of such a movement’s success. It is well known that Russia does not have a strong tradition of major street protests, apart from the 1917 Bolshevik Revolution. Whenever such revolutionary sentiments have erupted in the past, dissent has often been crushed. In view of the constraints of the internal system and the limited expectations by the masses about the utility of such a revolution, there is less possibility of the revolutionary contagion impacting Russia for long. The Russian people have, after all, experienced as well as witnessed similar movements in the past and are very well aware about the consequences of such drastic attempts at changing the status quo. However, this rumbling of discontent can led to disturbances and chaos. The political uncertainty has already affected Russians stocks and the ruble. The ruble-denominated MICEX index fell by 3.8 percent, the dollar-based RTS index dropped by 4.7 percent and the ruble was 1.3 percent down against the U.S. dollar. Moreover, the after-effects of such revolutions are even more pathetic and most of the Russian people are painfully aware of such post-revolution syndromes and are, therefore, unlikely to accept such sufferings readily.

Russian Prime Minister and presidential candidate Vladimir Putin has sought to downplay this upsurge, saying demonstrations are common in any ‘democracy’. In general, the public opinion in the cities other than Moscow and St. Petersburg reflects that there is no better alternative to Putin. Putin is still considered Russia's most popular politician and leader. He has strong support of many millions from the provinces who regard him as the man who restored order to Russia after the chaos of the decade that followed the collapse of the Soviet Union in 1991. It was quite clear that after the stipulated period of time his return would be evident. Therefore, a majority of Russians, it would appear, were not surprised about his decision to reclaim the presidency.

Recent demonstrations can, at best, dent the popular approval rating of Vladimir Putin, dipping the average rating from 60-61 percent to 51 percent. This may, however, be an emotional reflection triggered by large-scale protests, but the overall trend is still positive and supportive of Putin.

There is no wishing away the fact that there is growing discontent among people about the high corruption rate. Russia is in the 143 position out of 182 in the list of the surveyed countries on  the corruption index.  There are also defects in the political system which badly needs to be reformed, but at the same time the present government is geared to stabilize the economy in a period of international turbulence. Russia’s WTO membership, coming as it did after nearly two decades of tortuous negotiations, was highly appreciated by most Russians.

Broadly, Putin looks set to overcome the effects of recent protests and return to the presidency in the March elections. But if he wished to retain his popularity and credibility, he has to address a cluster of issues relating to transparency and accountability which triggered these protests. At the same time, he should be far-sighted enough to bring in other younger politicians to the forefront so that they could be groomed as the future leaders of the country.