Christmas for every day: museum at Klinsk 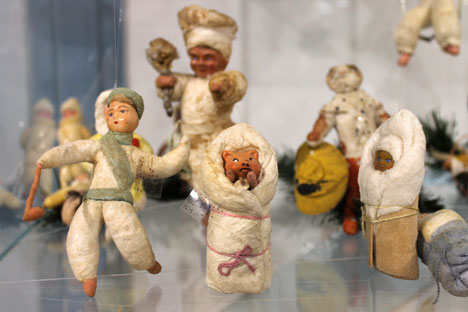 To find the best Russian holiday ornaments, take a trip to Klin and visit the Klinskoye Podvorye Museum.

While most people anxiously count down the days to the holidays, Christmas lasts year-round at Russia’s only museum of Christmas tree decorations, Klinskoye Podvorye. The museum features more than 2,000 ornaments that are a testament to the history of holiday celebrations in Russia.

The tradition of decorating Christmas trees came to Russia from Germany in the early 18th century, thanks to Tsar Peter I (the Great). In his time, candy and fruit were hung on Christmas trees. Later, these goodies were wrapped in paper or packed in little boxes. Later on, trees were decked out with cardboard and glass decorations brought from abroad. The first factories making Christmas tree decoration didn’t open in Russia until the mid-19th century, and early Russian decorations were not balls, but beads.

“Initially they just used women’s beaded necklaces. It was only some years later that they started making strings of beads just for Christmas trees,” said Lyudmila Dedikova, the museum’s senior guide.

Later, decorations made of cardboard, wire and cotton appeared. The simplest kind was made like this: two identical cardboard cutouts were made, pressed and glued together, and then painted.

“There were also surprise toys that might contain beads or a letter and a thread between the cardboard halves. The recipient of such a toy would pull the thread so the two halves opened up and the surprise dropped into your hand,” Dedikova said.

Today the factory in Klin produces only glass ornaments. Every craftsman sits over a gas burner at heated to a temperature of 500-900 degrees Celsius (900-1650 Farenheit). The craftsman holds a glass tube, and within seconds, thanks to the powerful flame, the craftsman can cut the glass, leaving only a part consisting of two “antennae.” The working antenna is in the craftsman’s right hand and the extra one is in the left hand. In the middle of the tube is the “pellet.” The extra antenna is soldered off and thrown away. The pellet is heated even more until the glass becomes soft and the worker can use the main antenna to blow out a ball. The result is a free-blown decoration.

To make some decorations, workers use special metal molds consisting of two halves between which a hot glass tube is placed and squeezed.

“At first glance, blowing out a ball seems easy. But in fact, it’s a very difficult job. We don’t hire random people; if somebody wants to become a glass blower, he first has to be an apprentice for nine months. And even then, not everyone can do it on the first try,” said Dedikova.

After the decoration is blown, it is sent to a workshop where it is covered with a special type of foil before it is dyed. The item is held by the antenna and dipped into a bowl of dye. It is then kept in a special dryer for 20-40 minutes.

The final and most interesting stage is the decorative painting. Every worker has an example on the table made by the factory’s chief artist and technologist. The items are painted in stages. If the item is, for example, a mushroom, first the grass is put on several glass blanks and then the top is painted. During the day, one item passes through an artist’s hands seven to 10 times, depending on the complexity of the pattern. When the item is fully painted, the antenna is cut off with a special knife, a metal cap is put on it and then the item is packaged.

This year the factory is trying to diversify, creating souvenir decorations that can be given not just once a year, but on any holiday.

“We have swans symbolizing love and fidelity, which are given at weddings. You can give little angels on somebody’s saint’s day. A bell keeps evil away and if you ring it from time to time, you will get to travel frequently,” said Dedikova.

But it is impossible to appreciate the beauty and originality of these decorations until they are hung on a tree. The museum has a whole parade of decorated trees representing various themes: Miss Russia is decorated with Vologda-patterned balls. An Oriental spruce tree, Miss Japan, has decorations in two colors, black and white, symbolizing the yin and yang. Next to them is a glittering Miss Morocco, or Miss Mandarin in honor of the season’s most popular fruit. One tree resembles a woman’s body, with a crown on its head and a brocade belt around its waist. The two prevailing colors, gold and red, symbolize power. “This is a queen,” said Dedikova. “We fantasize about whether it’s the British queen or our Empress Catherine the Great.” The most unusual Christmas tree is the gingerbread one, decorated in the Russian style with gingerbreads, boyar figurines, nesting dolls, and cockerels.

But the museum’s main fir tree stands in the festive hall where Grandfather Frost and the Snow Maiden greet visitors. The 33-foot-tall tree has 2011 handmade decorations in the Russian-European style. Very soon the tree will have 2012 decorations, but what they will look like remains anyone’s guess.