The west still looks at Russia through a prism of stereotypes 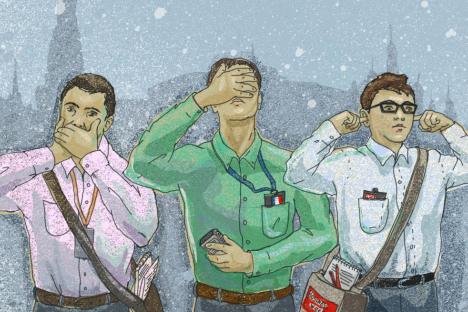 Respectable international media are still unwilling to delve deep into the specifics of Russia’s reality, which often leads them to ridiculous conclusions. This perception is due not to bias, but to banal intellectual laziness.

As expected, last December’s events caused yet another sporadic outburst of attempts by the foreign press to comprehend what’s happening in Russia. For several days, I was interrogated by virtually all the Francophone media, which, to my growing surprise, paid attention mostly to secondary issues without even trying to get to the heart of the unprecedented manifestation of civil activity in Russian society.

This tendency became especially conspicuous after the Dec. 24 rally when all the media outlets contacting me asked only about Alexei Navalny as a political figure and the consequences of Mikhail Gorbachev’s suggestion that Putin step down.

My answer was always the same: The ovation at the Bolotnaya Square rally and the drive of Navalny did not make him the recognized leader of the Russian opposition. At the same time, I tried to explain to them that Russia, most of whose population continues to worship Putin, does not need calls to storm the Kremlin, even though they are told it is occupied by “crooks and thieves.” Rather, the country needs to put in a lot of patient, thorough and conscientious work to create an opposition that doesn’t just shout slogans, but has a distinct platform. I also told them that with all my infinite respect for Mikhail Gorbachev, I believe that his appeal to Putin is just hot air meant for discussion.

I also drew the attention of my foreign counterparts to the case of former Finance Minister Alexei Kudrin and his action plan, which proposes the evolutionary development of civil society in Russia. At the same time, I stressed that neither Navalny nor Kudrin was the leader of the opposition, but rather examples of the processes emerging in Russian society today. But my attempts invariably encountered the cranky impatience of my interviewers, who insisted on sticking to the topic of their choice without embarking on a more detailed analysis of the situation. Moreover, when I tried to explain the essence of my position in more detail after the interviews, my foreign colleagues disregarded my remarks, apparently thinking it superfluous discussion of phenomena that they believed had no external effect.

This belligerent lack of inquisitiveness has recently brought many authoritative global media to the point where their anecdotal conclusions are further aggravated by their inability to consider any other scenarios.

Take the example of “Business Week” magazine: this highly respectable U.S. weekly decided that former chess champion Garry Kasparov could become the sole leader of the Russian opposition. “Kasparov is the only one in the movement who commands global recognition,” the magazine wrote by way of explanation. The “Chicago Tribune” all of a sudden ascribed to Vladimir Putin a profound knowledge of Sun Tzu’s “Art of War,” which the newspaper believes was evidenced by the fact that Russia’s “national leader” is “leveraging his opponents’ inherent disorganization against them,” just as the Chinese thinker taught – as if Putin, looking at the never-ending and senseless quarrels among his critics, wouldn’t have thought of this without Sun Tzu.

This willful ignorance is characteristic of not only the global media, but also all political offices, without exception. The unwillingness to delve into the nuances of various national realities inevitably discredits both the West in Libya and Russia in South Ossetia.

As for the West’s inadequate perception of Russia in particular, at the risk of inviting the criticism of those who advocate the theory of the “eternal global conspiracy” against our country, I believe that this perception is caused by elementary intellectual laziness rather than some malevolent bias. In fact, Russia is to a great extent responsible for this. During the 70-year-long Soviet-imposed isolation, the outside world had no chance to get to know Russian reality and was instead fed the specific social processes devised in the ideology office of the Communist Party’s Central Committee.

Despite the current openness of Russian society, the West still sees the country through a prism of clichés – positive, negative and neutral, but clichés nonetheless – without ever trying to move away from the familiar set of memorized ideas: sturgeon caviar, Dostoyevsky, the balalaika, the mysterious Russian soul, vodka, dissidents, the demonic KGB, oligarchs, matryoshka dolls and revolutionary sailors. This intellectual lethargy, colored by a carefully concealed superiority complex, already prevented the West from identifying the real reason behind the fall of the Soviet Union, resulting in its absolutely irrelevant disappointment with the events that followed. These pragmatic observers are making the same mistake again, trying to convince themselves that globalization processes will sooner or later bring humankind to some universal democratic common denominator.

You must be living in Neverland if you truly believe that Garry Kasparov enjoys “global recognition” as the leader of the Russian opposition, therefore completely ignoring the fact that most Russians do not care about the recognition of their politicians “in international circles.”

If the West and especially Europe really want to see the emergence of a civilized Russia in the foreseeable future, they should painstakingly and responsibly broaden their knowledge of Russian society, abandoning their clichéd pictures and the whimpers of our “micro-liberals.”

They simply have to stop being lazy and start scrutinizing Russia’s social processes, which are growing increasingly complex.

The most important thing is for them to understand that for obvious reasons, what is currently going on in Russia cannot fit into their own historical patterns, to which they constantly refer in order to justify their reluctance to look into the sources of the “exotic whims” of our mentality and social evolution.

This is more necessary for the West than for Russia, because one alternative to this natural maturation of civil society, which is unprecedented in Russian history, is the immediate recoil to its customary authoritarianism and self-imposed isolation.