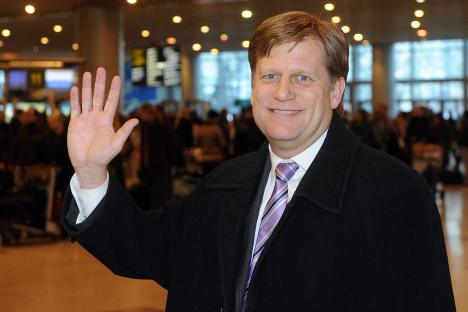 Will the architect of the U.S.-Russia reset Michael Mcfaul be able to resolve the growing differences between the U.S. and Russia?

The architect of U.S. President Barack Obama's Russia policy arrived in Moscow this weekend to become the new U.S. ambassador at a critical time for the nations' "reset" of relations, which has grown imperiled by bitter election campaigns in both countries.

Michael McFaul, 48, took up his duties Saturday when he arrived with his wife Donna Norton and their two sons at Domodedovo Airport, the newly minted envoy said on his LiveJournal blog. He'll begin work on Tuesday as the embassy remains closed Monday in observance of Martin Luther King Day, giving the McFauls extra time to get comfortable in the U.S. ambassador's palatial residence, Spaso House.

McFaul is not a career diplomat but is one of the most prominent Russia experts in the United States. He pursued an academic career before Obama appointed him as a special assistant and senior director for Russian and Eurasian affairs in the National Security Council, making him the White House's point man for ties with the Kremlin.

McFaul's appointment was widely welcomed when it became public last May, but his Senate confirmation was delayed in December by a Republican lawmaker who demanded assurances that Washington would not provide Moscow with sensitive missile defense information.

The impasse was resolved after the Obama administration provided a written guarantee that no such information would be given, but it highlighted the limited popularity the policy of rebuilding ties with Moscow enjoys among conservatives in Washington.

Critics warn that McFaul's mission is complicated by the fact that both counties are facing presidential elections this year (Russia on March 4, the United States on Nov. 6) and aggravated by the political crisis in Russia that started with last month's mass protests against alleged fraud in the State Duma elections.

McFaul finds himself "in [a] hot seat in [an] icy climate," Edward Lucas, the Economist's international editor and former Moscow correspondent, wrote on Twitter.

Anti-American rhetoric has been on the rise in the country since Prime Minister Vladimir Putin blamed Hillary Clinton for sponsoring the anti-government protests that swept the capital and other cities in December.

Experts don't expect the heated accusations to subside as the opposition pledges to continue its protests and the country gears up for the March presidential vote, which Putin is widely expected to win.

Leonid Gozman, a leading liberal activist, pointed out that anti-American hawks Dmitry Rogozin and Alexei Pushkov have been given high-profile positions after the Duma elections.

"I expect the anti-American card to be played during this election campaign," Gozman said Sunday.

But Gozman, who has known McFaul since the 1990s, said the veteran Russia expert was the best candidate he could think of for the job.

"If anyone can save our relations from breakdown, then it is Mike," he said.

Sergei Markov, a Kremlin-connected pundit and former Duma deputy, said McFaul's biggest drawbacks might be the thrust of his academic research and his ties to opposition leaders.

Markov pointed out that McFaul''s doctoral thesis, completed in Oxford in 1991, was about revolutions.

McFaul's later writings, collected in his biography on the U.S. Embassy's web site, constantly return to the topic of spreading democracy — like the 2009 piece "Advancing Democracy Abroad: Why We Should and How We Can."

"This will be viewed with big suspicion by many in Russia," Markov said.

These words were echoed by Sergei Oznobishchev, head of the Institute of Strategic Studies and Analysis, who told RIA-Novosti that McFaul will be met "with mixed attitudes at best, and negative at worst."

It is precisely these ties that convinced Republican hawks like Senator Mark Kirk, of Illinois, that McFaul is the right man for the job.

"I will be supporting his nomination also because he will be good in working with the opposition and human rights communities in Russia," Kirk told Reuters after finally approving McFaul's confirmation last month.

One of McFaul's biggest assets is that he actually knows and is friends with almost everybody in Moscow.

When President Obama entered a lecture hall at Moscow's New Economic School during his July 2010 visit, he was greeted with friendly applause. But when McFaul followed, the hall was on its feet as everybody stood up to say "Hi Mike," recalled Pavel Bayev, a professor at the Peace Research Institute Oslo.

"His network is just so incredible dense," Bayev said by telephone from Oslo.

For example, McFaul has maintained longtime ties with prominent liberals like Gozman, but also with leading pro-Kremlin figures like Markov, with whom he edited a number of books in the 1990s.

"What always struck me about McFaul is that he is a very democratic man — he always showed deep understanding for the simple people in Russia," said Markov, who recalled first meeting the new ambassador at a young scientists' round table in 1990 or 1989.

He said McFaul's other main strengths will be that he has direct access to President Obama, having served as his Russia adviser for three years and that he should know the White House better than most career diplomats.

"I very much look forward to seeing him when I return to Moscow," Markov said, speaking by telephone from a hospital bed in Beijing, where he was being treated for a broken leg.

McFaul's writing has not always been well received. His 2001 book "Russia's Unfinished Revolution: Political Change from Gorbachev to Putin" was criticized as being soft on the country's democratic development under President Boris Yeltsin.

U.S. writer John Dolan wrote in a scathing 2002 critique in The Exile, then an alternative Moscow newspaper, that he would "like to spit in McFaul's face" for belittling the first Chechen war.

On Friday, McFaul introduced himself to the Russian public in a YouTube video that portrays him as a family man who developed an interest in U.S.-Soviet relations back when he grew up in Montana.

"I believe my most important mission is to continue to help Russians understand who Americans are, what we stand for and what we seek in our relationship with Russia and the Russian people," McFaul says in the video, speaking in English with Russian subtitles.

The video gathered more than 700 comments on McFaul's LiveJournal blog by late Sunday — not all of them welcoming.

"Why another Orangoid?" a user named Imperial_wombat writes, referencing Ukraine's 2004 Orange Revolution, which was portrayed by the Kremlin as a U.S.-sponsored uprising.

Yet, user Ampir welcomes the arrival of "Uncle Mike" and then asks: "Gimme a grant for democracy."