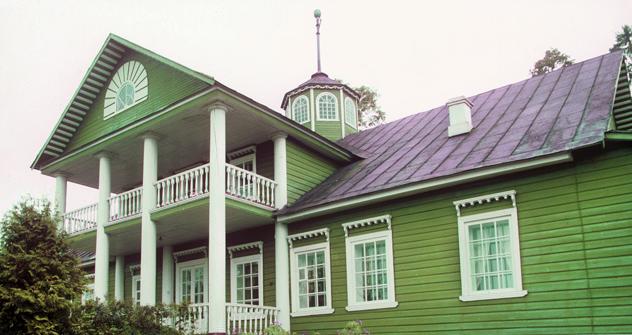 Alexander Pushkin spent many happy moments in the estates of his family and friends near the northwest Russian city of Pskov.

Of the many sites connected with Alexander Pushkin – Russian literature's free spirit and founding genius – none is more lyrically evocative and biographically rich than the cluster of estates collectively know as "Pushkin Hills." Mikhailovskoye, Petrovskoye and Trigorskoye are located some 75 miles to the southeast of the ancient city of Pskov near the Svyatogorsky Monastery, where the great poet is buried. In this picturesque region of Pskov Province, pine forests and birch groves are interspersed with fields, small lakes and gentle hills.

From a biographical perspective, the most important of these estates is Mikhailovskoye, which Pushkin's great-grandfather, Abraham Petrovich Hannibal received from Empress Elizabeth in 1742 for his services to her father, Peter I (the Great). After Abraham's death in 1781, the estate went to his son Osip, who built the main house and laid out a park. Following Osip's death, in 1806, the house remained in the hands of his widow, Maria, and daughter, Nadezhda, who was Pushkin's mother.

In 1866, this original house was dismantled by Pushkin's younger son Grigory and rebuilt in a different style on the same foundation. That house in turn burned twice, in 1908 and 1918, but each time it was rebuilt because of the association with Pushkin. Severe fighting during World War II caused further damage. In 1949 architects used the original foundation and old memoirs to reconstruct the house in a form closer to that of Pushkin's time. As a result, the present house and most of the adjacent service buildings are 20th-century reconstructions. Yet the ambience of the estate is so evocative that visitors can imagine the modest existence Pushkin led here.

In fact the poet rarely lived on this remote estate. His first visit was in the summer of 1817, just after graduation from the Alexander Lycée at Tsarskoe Selo. He later wrote of these six weeks as a delightful time in which he discovered the pleasures of village life. Yet he was perceptive enough to realize that not all was idyllic in this serf society. His sentiments of protest appeared so clearly in certain poems that Emperor Alexander I sent him in exile to the south of the Russian empire, where he spent almost five years. Pushkin returned from Odessa to Mikhailovskoye in August 1824. He was not alone: his parents as well as his sister Olga and his brother Lev were there, but the family left for St. Petersburg in November and for the next two years Pushkin was left largely to himself.

The enforced idleness proved very productive. At Mikhailovskoye he continued writing his novel in verse Eugene Onegin as well as the dramatic tragedy Boris Godunov. Despite the languor of provincial life, Pushkin was not a recluse. He came to a more profound appreciation of the folk culture represented by his former nanny, the elderly Arina Rodionovna, with whom he had frequent talks. His primary antidote to boredom, however, was at the neighboring estate of Trigorskoye, where Pushkin visited the family of Praskovya Osipova.

For information on another estate closely connected with Alexander Pushkin, see RIR article on Boldino

Like the Mikhailovskoye manor, the Trigorskoye house burned in 1918 as a result of the violence that swept the Pskov region during the civil war. After World War II, it was rebuilt on the original foundation. The elongated house is strange in form. It resembles a barn and had earlier been used for weaving linen. The Osipova family moved there temporarily in 1820 during major repairs to the main house. When the it burned to the ground, Madame Osipova decided to remain in the temporary residence and added porches on either end. The Osipova family included the twice-widowed Praskovya, her four daughters and one son, as well as assorted relatives. The matriarch was enamored of Pushkin, and he was pleasantly spoiled during his visits to their house. But the poet's attentions were directed to Osipova's niece, Anna Petrovna Kern, who visited Trigorskoye in the summer of 1825. Pushkin had met Kern previously in St. Petersburg, and this unexpected reacquaintance stimulated his desire. He wrote for her one of his most passionate love lyrics: "I remember the miraculous moment." When Osipova got wind of this romance, she spirited Kern back to her husband in Riga. In September 1826, Pushkin was allowed to return to the great world of Moscow and St. Petersburg, albeit under the supervision of Nicholas I and his gendarmerie.

Achala Moulik: Growing up with Pushkin and Tagore

The third in this ensemble of estates, Petrovskoye, is the one most closely connected with Pushkin's Hannibal ancestors. In 1781 it was deeded to the first of Abraham Hannibal's sons, Peter, who made it his home. Although not great in size, it was the most impressive among the three Pushkin estates. Petrovskoye, too, was burned in 1918. Archival documents were used in its reconstruction, which was completed in 1976. The house was surrounded by a natural park leading to Lake Petrovskoye (or Kuchane), with a network of paths, bowers, and pavilions. Pushkin is said to have visited his great-uncle there several times.

The final Pushkin site in this area is the Sviatogorsky Monastery, founded in 1569 at the command of Ivan IV (the Terrible). Located at the top of a small, steep hill, the monastery contains the Church of the Dormition of the Virgin, built of flat stone in 1569 and expanded in the 1770s. Pushkin visited the monastery on numerous occasions and various members of his family were buried here, including his mother in April 1836. Less than a year later, on January 29, 1837, Pushkin died in a tragic duel. Shortly after his funeral in St. Petersburg, his body was brought under guard to the Sviatogorsky Monastery and laid to rest next to the grave of his mother near the east wall of the Dormition Church. At the end of 1839, Pushkin's widow, Natalya Nikolaevna, commissioned the Petersburg sculptor A. M. Permagorov to create a marble obelisk for the grave. In Fall 1840 it was placed with a simple inscription of the year and date of his birth and death. For Russia's greatest poet, any other words would have been superfluous.