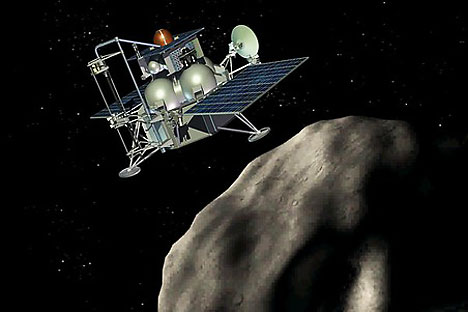 The scientific director of the Space Policy Institute, Ivan Moiseev, commented on the situation with Phobos-Grunt

World news agencies, one after another, quoted the words of the head of Russia’s Federal Space Agency (Roscosmos), Vladimir Popovkin, who in an interview with a major Russian newspaper said that someone may possibly be sabotaging spacecraft when they are located beyond the coverage of tracking stations.

“Today it is unclear why the propulsion unit onboard Phobos-Grunt failed to start,” said Vladimir Popovkin, who recently served as the commander of the space forces. “It is also unclear why the frequent setbacks with our vessels occur when they are traveling through what for Russia is the ‘dark’ side of the Earth – areas where we do not see the craft and do not receive its telemetry readings. I do not want to blame anyone, but today there are some very powerful countermeasures that can be used against spacecraft whose use we cannot exclude.”

If this horror story was started by a science fiction writer, then perhaps it would not have caused such a stir. But when the head of Roscosmos says that any spacecraft, including the International Space Station, could in essence easily be made inoperable, that makes it serious.

I turned for commentary to a number of prominent specialists, who all shared the same opinion that, theoretically (considering the future development of new technologies), it is possible to consider this version of influence on space vessels but in practice, today, it is impossible to imagine. Most of my interlocutors asked to remain anonymous, as they are closely linked to the space industry and fear trouble. But for some experts, who see some serious negative repercussions emerging from an unfounded search for adversaries, it was important to make their opinions heard to the public. The scientific director of the Space Policy Institute, Ivan Moiseev, commented on the situation as follows: “I am not new to the space field, and I do not know of any powerful machines that have been created that are able to hit a target in space in order to disable both the primary and the back-up equipment. Such experiments have not been held anywhere in the world.”

-- “But such experiments could have been conducted in secrecy…”

-- “When, in the course of such experiments, spacecraft are targeted, hiding them becomes practically impossible. Moreover, many people would have been engaged in the process, and some information would have inevitably leaked.”

-- “But imagine for a second that there is some laser or another type of powerful gun, shooting at an interplanetary station or a satellite…”

-- “Then that raises a legitimate question: how could the General Staff had overlooked such an effective weapon? After all, this would then make our entire defense extremely vulnerable. No, in reality, all of these attempts to hunt for an enemy are pure nonsense. Besides, how would one benefit from disabling the Phobos-Grunt interplanetary station? Terrorists cannot possibly have such super-modern technologies. Who does that leave? The US? Europe? Could you imagine the United States, even if it did possess such equipment, taking such a step? No, not at all – this is all fabricated.”

-- “Very well. Then why do space vessels fail in the ‘dark’ side of the Earth?”

-- “The explanation is quite simple. When a vessel is traveling within the zone of coverage of tracking stations, then any type of malfunction is immediately recorded and reasons for the failure are immediately identified, because telemetry readings are constantly being received. But when a satellite or an interplanetary station is in the ‘dark’ side of the Earth, there are no telemetry readings, and often it is simply impossible to determine what happened. Sometime later, when the vessel enters the zone of radio coverage, it is possible for equipment to stop responding to signals coming from the ground. And that is how the strange hypotheses are born among those who are responsible for the state of space equipment. It is unfortunate that these statements have been made at such a high level. You know, undermining relations with partners in space exploration is easy, but fixing them is not.”

Another person to comment on the events was Trud’s longtime friend, Valery Ryumin, deputy designer general at the world-renowned Energia Corporation and producer of all of our manned spacecraft, a pilot-cosmonaut who has been to space four times and is a two-time Hero of the Soviet Union. He is a high-end designer, a graduate of the division of electronics and computing machinery in the space sector, and a true ace. It was with great difficulty that I was able to reach him yesterday afternoon, as he lives outside Russia.

“Disablement of the Phobos-Grunt complex (as well as other spacecraft) with the help of some powerful means is an absolutely incredible scenario. I think that instead of searching for enemies, we need to analyze our mistakes. The Phobos-Grunt control system was flawed – and that’s all. Meanwhile, blaming our own mistakes on some enemies – that’s something that has already been done in the past.”

In conclusion, I would like to remind you that in the Soviet Union there were no problems with telemetry readings, because monitoring was done from the world’s oceans by special vessels, which served as maritime tracking stations. In 1979 this fleet consisted of 11 vessels. Almost this entire rich heritage has been lost.