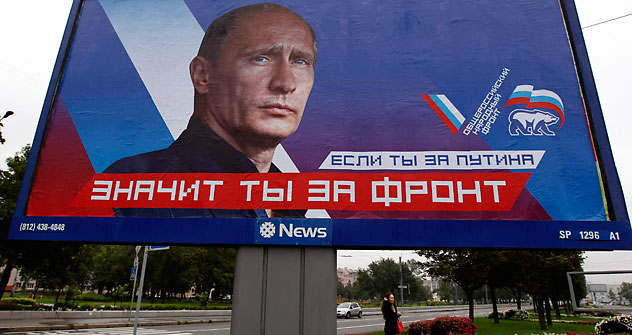 Putin doesn’t try to address the protesters of any kind, he speaks to those who are sure that Russia is the best country in the world. Source: Reuters / Vostock Photo

This is, of course, the basic program, properly compiling and addressing our citizens’ needs in all spheres, in all branches of activity,” wrote Prime Minister Vladimir Putin in the preface to the program for his presidential election campaign, which was published on his campaign website on Jan. 12.

According to Putin’s spokesman Dmitry Peskov, the prime minister himself wrote the program by hand over the holidays, “based on the suggestions of citizens from all regions of Russia.” Peskov said the program sets out “a new worldview associated with a changing world.”

Mikhail Prokhorov: government for the people

The program never mentions the United Russia party, which formally nominated Putin for the presidency, reinforcing the perspective of many observers who believed that the prime minister would distance himself from the party of power following the accusations of vote rigging and protests that erupted after the December 2011 State Duma elections.

In the program’s first chapter, “Results of the Decade and the Challenges Ahead,” Putin recalls the troubles that Russia inherited from the Soviet Union and which grew during the 1990s – as well as how many of them were overcome with his help. Putin argues that political stability, as he achieved, ensures economic growth, pointing out the increase in GDP and household incomes achieved during his time in office along with lower unemployment, inflation, and mortality rates.

“We joined the club of rapidly developing countries,” Putin wrote. “From a ruined national economy in the 1990s, Russia rose to the position of the sixth-largest world economy.” But he admits: “Russia lags behind leading countries in labor productivity and energy efficiency, two or three times over.” Putin’s recipe for bridging this gap is not a new one: “Economic modernization and growth of entrepreneurial activity.”

The chapter, “Spirituality and the Unity of the Russian People,” is specifically dedicated to the media and the Internet. Here, recognizing their cognitive and educational value, Putin promises to “fight the attempt to use the information space to promote hatred, nationalism, pornography, drug abuse, smoking and drinking.”

Putin devoted much attention to regional development in Russia. Regions are promised financial assistance from the federal government, but Putin did not discuss the plan to return to direct election of governors, which had been previously discussed by both himself and President Dmitry Medvedev.

Putin did, however, dedicate a large section of the program to the creation of affordable housing. During the prime minister’s annual televised Q&A session last December, this was the topic on which he was asked the most questions. On TV, he said: “There are a lot problems in this area and little responsibility.” In his electoral program, Putin wrote that the key to these challenges is “the creation of favorable conditions for attracting private investment in this industry.”

The main idea behind the economic part of the program is growth in investment – “at least to the level of 25 percent of GDP by mid-decade, versus 20 percent today.” To encourage growth, Putin promised in particular to promote the development of energy, manufacturing, agriculture, and, of course, telecommunications, information technology, biotechnology, and other hi-tech industries. The presidential candidate guarantees entrepreneurs “protection against any infringements on private property.”

“The decrease in interest rates will become an incentive for investment in the real sector of economy,” Putin wrote. “We will solve this task in the first place by means of decreasing inflation and developing national financial market, using the tool of “long-term money.”

Putin also promised to support domestic exporters of deep-processed commodities and to foster innovation, “in order to achieve a qualitative leap in the economy, to improve national competitiveness.”

In terms of foreign policy, improving relations in the former Soviet space remains a priority for Putin. “The Customs Union of Russia, Belarus, and Kazakhstan is working. Starting in 2012, the Common Economic Space is becoming a reality – this is an even more profound level of integration. We will move further towards the establishment of a Eurasian Union, opening a new era in relations in the post-Soviet space,” Putin wrotes.

In international relations, Putin intends to expand Russia’s economic and cultural influence, as well as uphold its political and economic interests.

“Unilateral steps by our partners that do not take into account Russia’s opinion or interests will receive a proper assessment and our response,” Putin wrote, setting the stage for the final paragraphs of the program, which describe the modernization of the armed forces and an increase in their combat readiness.

Experts say that Putin’s program is complex. According to political scientist Sergei Chernyakhovsky, one of the document’s most important points is that Putin places the state’s social responsibilities to citizens above the task of immediate economic development. “The key issues are setting to change the very technological base of society, the idea that power should be controlled by the people and the decision of what kind of country to be should be decided by the people,” Chernyakhovsky said.

Conversely, Gleb Cherkasov, the politics section editor at Russian daily “Kommersant” sees no breakthrough in Putin’s program. “The program is classic––for everything good and against everything bad. It’s evident that it was written so that later it will be possible to take blocks and fill them with something else. Such as the storage of missiles without warheads,” said Cherkasov.

According to political analyst Mikhail Vinogradov the key peculiarity of Putin’s program is the fact that prime minister relies on recently created All-Russia People’s Front rather then on the ruling party. But the target audience still the same: “Putin doesn’t try to address the protesters of any kind, he speaks to those who are sure that Russia is the best country in the world and has some specific mission and spirituality,” Vinogradov said.

“The program in general is well rounded: some goals and priorities are declared but all of them are vague”, says political analyst Georgy Chizhov. According to him, Putin tries to satisfy any possible voter, and therefore avoids any dangerous points.