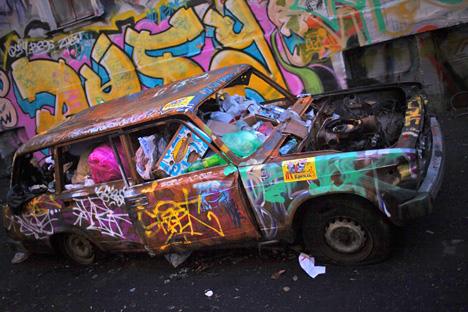 Moscow is peppered with graffiti tags - the drawings, painting and writing of various artists, who want to leave their mark in the urban jungle. But what is the distinguishing feature of Russian graffiti?

The first graffiti appeared in the Soviet Union at the end of the 1980s. Graffiti writing was one of the four pillars of hip-hop, along with breakdance, DJing and rap. For a long time, these four elements developed as part of the same phenomenon. At the end of the 1990s and the beginning of the 2000s, a small hip-hop revolution happened in Russia. The lifestyle suddenly ceased to be an underground movement and started to become fashionable, although it never quite made it to the mainstream.

Many graffiti writers who started at this time look back at the 1990s and early 2000s with a certain nostalgia. Information and paint were very hard to come by back then, and the struggle to get these instruments of the trade shaped the movement.

About five years ago, however, graffiti began to enter popular culture. Young people began leaving tags anywhere and everywhere they could. Graffiti also took on a new meaning in the minds of the general public; it could now also be seen as art, rather than vandalism.

Moscow’s most active group of graffiti writers is ChTO. They look like ordinary guys, but their looks belie their talent and motivation. One night at midnight, on a lively crossroads outside the Chistiye Prudy metro station in the center of Moscow, some ChTO members emerge from the subway and go into a shop where they buy several cans of spray paint, put on masks to hide their faces and gloves to make sure their hands are clean if they’re caught.

They have to be in good shape, since they often have to run from police. On this particular night, they have only begun writing outlines when someone notices a police car.

It was unclear whether this was a routine patrol, or whether someone had intentionally called the police, but the ChTO members put everything down and run through various courtyards. Ten minutes later, however, they came back and finished what they had started.

Adrenalin. Excitement. This is why young people are willing to risk spending their nights outside writing on the walls of Moscow. Art and ideas are only of secondary importance. Now, Russian graffiti just needs to gain worldwide recognition.