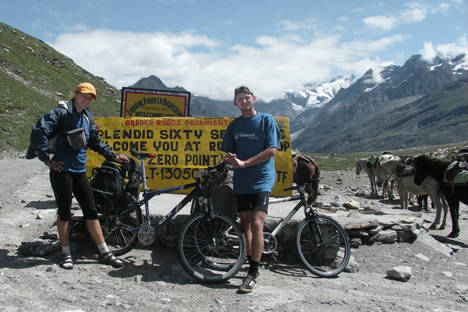 Ekaterina Verin-Galitskaya took her passion for bicycling to India

Russians, particularly those in the Far East, are famous for their sense of adventure. They keep off the tourist track and discover real India.

When Nadia Dubinina told her friends in Vladivostok that she was planning to visit India with her boyfriend, they automatically assumed that the couple would be on a romantic sojourn in Goa to escape the brutal Primorye Territory winter. The 30-year old English to Russian translator shocked them when she said the trip involved rough travel through India’s poorest regions. Nadia, inspired by the teachings of a Buddhist monk from Denmark, decided to visit Buddhist pilgrimage sites in Uttar Pradesh, Bihar and Nepal.

Dubinina faced the difficulties of the journey by remembering the words of her spiritual teacher who said “pilgrimage is a good way to clean karma.” The couple mostly stayed in Mahayana Buddhist monasteries and look back at the trip as a defining experience. “If I wanted a peaceful and relaxed holiday, that is not where I would like to go,” said Dubinina. “Many people in our group had stomach problems, infections, colds and fevers, but the trip was none the less wonderful,” she said, adding that it was an amazing experience to be where several lamas meditated on their path to enlightenment.

Others like Yevgeny Kovalskiy managed to gather a lot of attention, when he stayed in a yoga ashram in rural Kerala. Learning a bit of Malayalam endeared him to the locals and there was even an article about his stay at the ashram in the Matrubhumi, a widely circulated daily newspaper. Kovalskiy, who spent over 2 years travelling across Asia, felt at ease in Kerala and now teaches yoga in Khabarovsk. “I turned vegetarian in Kerala and gave up drinking,” said the 28-year old, who also promotes vegetarian cuisine and healthy living in the Russian Far Eastern city.

Keeping off the tourist track, the Khabarovsk resident travelled by train to northern India and wanted to trek in the Himalayas in Uttarakhand, but bad weather played spoil sport. Kovalskiy is now looking to organise a “walk across India trip,” where he would lead a group of Russian Far Easterners from Delhi or Mumbai to Calcutta by foot, spending nights in small villages.

It’s not just young people from the Russian Far East that are coming to India for unique experiences. Tamara Chikova, a professor at the Sakhalin State University in Yuzhno-Sakhalinsk celebrated her 71st birthday in Mysore, in awe of the 96,000 lights that adorned the city’s palace. She had never travelled outside the former Soviet Union before this trip and relished every moment in India. “Ever since I saw my first Hindi film in the 1950s, I wanted to visit India, the country of palaces, Hinduism and beautiful women in saris dancing in the rain.”

Chikova did visit the Taj Mahal but chose to stay off the tourist areas after the trip to Agra. “I enjoyed observing day to day life in Bangalore, a city that had good weather and was a mix of modernity and tradition.” The communist flags across Kerala also fascinated the professor, who like many in her generation feels nostalgic about the erstwhile Soviet Union. It’s nostalgia about India of yesteryear that’s making Lyudmila Greenko, a young academician in Sakhalin, want to visit India. “I know India is not just the land of temples, elephants, but my grandfather’s impressions from a trip in the 1960s have made an India trip a priority,” said Greenko, who is also excited about feeling the “new pulse and energy” of the country.

Russians, particularly those in the Far East, are famous for their sense of adventure and Ekaterina Verin-Galitskaya took her passion for bicycling to India.  Along with a friend from Khabarovsk, Verin-Galitskaya travelled from Laddakh to Manali on bicycle. The rocky terrain, which is infamous for landslides and the high altitudes didn’t deter the pair from indulging in an activity that few Indians would even consider. While her initial impressions of India (in Delhi’s Paharhanj) were not pleasant, Verin-Galitskaya enjoyed the serenity of the Himalayas and talks fondly of her visits to Srinagar’s Shalimar Gardens and the city of Leh.

It’s the less treaded path that inspires Olga Komaretseva, a film-maker, who is originally from Vladivostok. “It’s boring to come all the way to India and then get sun-burned in Airambol (a town in Goa that is very popular for Russian tourists)...I want to see beyond the stereotypes,” she said. Komaretseva is looking to make a short film on the Auroville international community near Pondicherry in south-eastern India. She is also looking at making films on topics as diverse as Tibetan monks and urban fishing communities.

The craze for the “real India,” has also hit the Internet and the blogosphere. There are several communities on the popular blogging site Live Journal that are dedicated to travel in India. One such community, which calls itself ‘Russians, who love India,’ has members who are passionate about places such as Amritsar, famous for the Sikh Holy Shrine, the Golden Temple. Since the city in Punjab is connected to Russia with direct flights, it’s a popular entry point into India. Irina Pavlova, a resident of a town near Nakhodka on the North Korean border, has been to India 7 times and not visited Agra or Delhi even once. “It’s great to land in Amritsar, spend a few days there and move on to the Himalayas, she said, adding that she is not particularly interested in visiting the Taj Mahal or Goa.

Unlike in Goa, there are few restaurants in places like Leh, Mysore or Trivandrum, which have menus in Russian or a set of people armed with Russian language skills, but that is no deterrent even for those Far Easterners who speak little English. The words of Irina Pavlova sum it up best: “If I wanted to speak Russian and eat Russian food, I’d rather stay in Nakhodka, than travel all the way to India.”