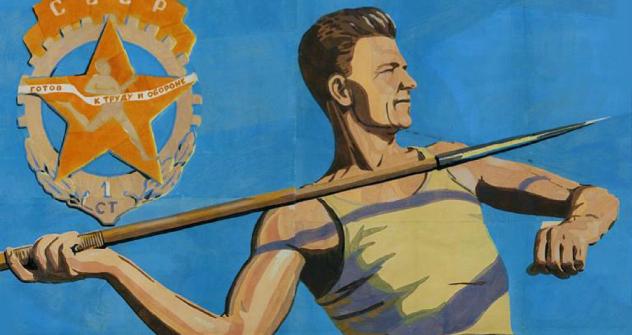 The “Windows of the War: Soviet TASS posters at home and abroad, 1941-1945” exhibit at the Art Institute of Chicago drew phenomenal international attention to Soviet anti-war posters. Art historian Konstantin Akinsha was one of the guest curators of the exhibit and a contributor to the catalogue. In an interview, he sheds light on how the posters were found and why they are so significant today.

The catalogue is available as a comprehensive reflection on the TASS poster art, and curators and researchers hope to create an independent website devoted to the wartime posters.

How were these TASS posters discovered?

Some time ago a big roll of Soviet propaganda posters was found between two fake walls during renovations at the Art Institute of Chicago. No one knew who put them there, when and what for. The posters were all restored. The question arose what to do with them, so Peter Zegers, Rothman Family Research Curator, Department of Prints & Drawings, came up with an idea of a poster exhibition. He also put a lot of effort into making it happen; I would say it was mostly his work. We began the research, and as a result of our travels across America we found out that many institutions in the United stated have such posters, because in Soviet times there was a very wide distribution abroad, existed even by subscription. The only problem was, those posters mostly were printed on newsprint fibers, which were very thin, so after some time the placards were literally falling apart. Therefore, many American institutions had them, but in very bad condition.

It’s important to know that during World War II some of the posters were printed in parts and eventually glued together. So when we came to Stanford’s Hoover Institution, we found many separate parts that were printed on a surprisingly thick and nice paper, which was very unusual. We were collecting them, piece by piece, like a puzzle….

How did these posters ever survive?

The secret is, this batch was printed on thick paper especially for an exhibition at the San Francisco Soviet American Institute, as well as a similar batch that were found at MOMA’s warehouses. The most intriguing part was that the U.S.S.R. did not have those posters, because many of the very first ones, from 1941, didn’t survive World War II. Most of them unfortunately were lost and destroyed, especially when Hitler’s army was near Moscow – everyone was in panic and of course saving TASS posters was not at the top of their priorities.

Some of them still exist in Russia only as small black-and-white photographs. So preparing for that exhibit we made a few great and surprising discoveries. Every American art institution or private collector we asked lent us what we wanted, so we did not have to contact Russia for this, which was good, because last year, all of a sudden, Russian rules on lending and transporting art pieces became very strict. So if we counted on Russia, our exhibition could have never been the way it was.

Can you tell us about the history of these posters in the Soviet Union?

The so-called “Okna TASS” posters were a unique phenomenon. A few days after Germany declared war to the Soviet Union on June 22 of 1941, a group of artists came up with an initiative of making some propaganda materials to raise the fighting spirit of the Soviet people in the artistic tradition of “Okna ROSTA”, the placard series of the Civil War. This list of artists included many great names, for instance, Mikhail Cheremnykh, who used to work with Vladimir Mayakovsky. In fact, Mayakovsky has affected this whole project on a much bigger scale than one can think.

In 1940 the whole country was commemorating the 10th anniversary of the poet’s death. Joseph Stalin had spoken about the dead futurist as “the best poet of our epoch,” so the “general line” of the party was clear. The year of 1940 was dedicated to Mayakovsky, at times in very weird ways. Everyone tried to get his piece of pie off of Mayakovsky. For example, all of a sudden, some old avant-garde artists, neglected by the regime, wrote memoirs about how close they were with the deceased, because it was their only way back to the artistic community. People of all backgrounds tried to demonstrate their connection to the poet, which at times was totally made up, but it was a great social lift of that period. A huge permanent exhibit dedicated to Mayakovsky was supposed to open in Moscow on June 22, 1945, but the German bombing of Kiev confused the plans.

All those legends of how those posters were distributed at the frontline and inspired Soviet soldiers and officers to better fight the enemy, or how partisans crossed the front line wrapped in those posters and pasted them up on the enemy’s side, are nothing but beautiful legends. Okna TASS posters were present mostly in Moscow. However, they grew more and more popular--maybe not among those fighting for their country at the frontline, but among cultured urbanites. At some point their smaller, lithographic versions, that were much easier to produce, started spreading, and that was the main reason for their popularity. Some images became iconic, made it to postcards.

In the meantime the production technology became more complicated with more colors, so the artists often overspent their budget. In Stalin’s hierarchy of art a picture was at the top, so the idea was to make a unique and at the same time mass culture object, that is an oxymoron by definition.

The board of TASS wanted to improve and make light films, slide films and cartoons based on “Okna Tass” images, a completely revolutionary animation genre. At that time there were light boxes on the streets of Moscow, screening those posters and war photographs.

How come Soviet propaganda posters became so well-known outside the Soviet Union?

The other life of those posters and images began, when all of a sudden they became a popular export item from the Soviet Union abroad. Some of them looked weird, some cute, some were very funny, so they caught a great amount of attention in foreign countries. TASS posters were exported through different channels, including the Communist Party. First they were sent to the United States, then to the United Kingdom, then to many other countries, from Latin American to China, from 1942. Countless exhibitions of Soviet anti-war posters were held in many countries one after another, including those at the Metropolitan Museum, at the MOMA, in some art institutions in Chicago. The posters were covered in press a lot, and also translated and used, for instance, in the U.S., to raise the allies’ fighting spirit.

But after the end of World War II everyone sort of forgot about them.

So what were people’s reactions to the Chicago exhibit?

First of all, it drew a very emotional reaction from Soviet immigrants of previous generations; they were very touched and kept coming again and again. I’m talking about people of the age of 60 and older, those, who emigrated from Soviet Union, not Russia yet. Even though they had a really tough past in the Soviet Union, they loved the exhibition very much. Also, there is a cast of people who love war history and they came from many other cities and states.

There were some related  exhibitions at Northwestern University and The University of Chicago....It all turned out to be sort of a festival of Soviet posters, so it was big deal for Chicago.

Can you tell us about the organization of the exhibit and catalogue?

We had four curators plus a few researchers. I can compare it to building a cathedral. It can be tough because there are so many opinions. Originally the idea was to illustrate every day of war, but we were afraid the visitors would die in the first third... Still, it was a very thorough illustration of the war. The original plan was to open on June 22, the anniversary of the Fascist attack on the Soviet Union, but we had to fix some things so it opened in July.

Our exhibition in Chicago was enormous, a little big too big, I think. There were 250 big posters plus additional materials. It was really hard to go through it all at once, it was endless. We did something that has not been done yet, it was the biggest exhibition of Soviet propaganda posters ever.

The first edition of the catalog was sold out instantly, so we had to print another one. [Editor's note: The catalogue, an extraordinary tome, is available from the Art Institute of Chicago online.]