How India brought down the US’ supersonic man 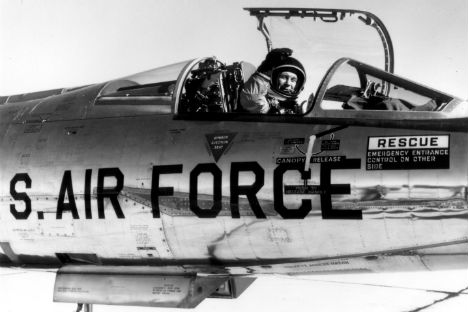 Chuck Yeager, the legendary test pilot kicked up a diplomatic storm in a war situation.

Chuck Yeager is an American icon and will go down in history as the first man to break the sound barrier. But during the 1971 India-Pakistan War, when an Indian pilot shot his personal aircraft, the air ace lost his cool, and demanded retaliation against India. Mercifully, his antics were ignored by then US President Richard Nixon.

The 1971 India-Pakistan war didn’t turn out very well from the US' point of view. For one particular American it went particularly bad. Chuck Yeager, the legendary test pilot and the first man to break the sound barrier, was dispatched by the US government to train Pakistani air force pilots but ended up as target practice for the Indian Air Force, and in the process kicked up a diplomatic storm in a war situation.

Yeager’s presence in Pakistan was one of the surprises of the Cold War. In an article titled, "The Right Stuff in the Wrong Place,” by Edward C. Ingraham, a former US diplomat in Pakistan, recalls how Yeager was called to Islamabad in 1971 to head the Military Assistance Advisory Group (MAAG) – a rather fanciful name for a bunch of thugs teaching other thugs how to fight.

It wasn’t a terribly exciting job: “All that the chief of the advisory group had to do was to teach Pakistanis how to use American military equipment without killing themselves in the process,” writes Ingraham.

Among the perks Yeager enjoyed was a twin-engine Beechcraft, an airplane supplied by the Pentagon. It was his pride and joy and he often used the aircraft for transporting the US ambassador on fishing expeditions in Pakistan’s northwest mountains.

Yeager may have been a celebrated American icon, but here’s what Ingraham says about his nonchalant attitude. “We at the embassy were increasingly preoccupied with the deepening crisis (the Pakistan Army murdered more than 3,000,000 civilians in then East Pakistan, now Bangladesh). Meetings became more frequent and more tense. We were troubled by the complex questions that the conflict raised. No such doubts seemed to cross the mind of Chuck Yeager. I remember one occasion on which the ambassador asked Yeager for his assessment of how long the Pakistani forces in the East could withstand an all-out attack by India. "We could hold them off for maybe a month," he replied, "but beyond that we wouldn't have a chance without help from outside." It took the rest of us a moment to fathom what he was saying, not realising at first that "we" was West Pakistan, not the United States."

Clearly, Yeager appeared blithely indifferent to the Pakistani killing machine which was mowing down around 10,000 Bengalis daily from 1970 to 1971.

After the meeting, Ingraham requested Yeager to be be a little more even-handed in his comments. Yeager gave him a withering glance. "Goddamn it, we're assigned to Pakistan,” he said. "What's wrong with being loyal?!”

"The dictator of Pakistan at the time, the one who had ordered the crackdown in the East, was a dim-witted general named Yahya Khan. Way over his head in events he couldn't begin to understand, Yahya took increasingly to brooding and drinking,” writes Ingraham.

“In December of 1971, with Indian supplied guerrillas applying more pressure on his beleaguered forces, Yahya decided on a last, hopeless gesture of defiance. He ordered what was left of his armed forces to attack India directly from the West. His air force roared across the border on the afternoon of December 3 to bomb Indian air bases, while his army crashed into India’s defences on the Western frontier.”

Yeager’s hatred for Indians was unconcealed. According to Ingraham, he spent the first hours of the war stalking the Indian embassy in Islamabad, spouting curses at Indians and assuring anyone who would listen that the Pakistani army would be in New Delhi within a week. It was the morning after the first Pakistani airstrike that Yeager began to take the war with India personally.

On the eve of their attack, the Pakistanis, realising the inevitability of a massive Indian retaliation, evacuated their planes from airfields close to the Indian border and moved them to airfields near the Iranian border.

Strangely, no one thought to warn General Yeager.

The thread of this story now passes on to Admiral Arun Prakash. An aircraft carrier pilot in 1971, he was an Indian Navy lieutenant on deputation with the Indian Air Force when the war broke out.

In an article he wrote for Vayu Aerospace Review in 2007, Prakash presents a vivid account of his unexpected encounter with Yeager. As briefings for the first wave of retaliatory strikes on Pakistan were being conducted, Prakash had drawn a two-aircraft mission against the PAF base of Chaklala, located south east of Islamabad.

Flying in low under the radar, they climbed to 2000 feet as they neared the target. As Chaklala airfield came into view they scanned the runways for Pakistani fighters but were disappointed to see only two small planes. Dodging antiaircraft fire, Prakash blasted both to smithereens with 30mm cannon fire. One was Yeager's Beechcraft and the other was a Twin Otter used by Canadian UN forces.

When Yeager discovered his plane was smashed, he rushed to the US embassy in Islamabad and started yelling like a deranged maniac. His voice resounding through the embassy, he said the Indian pilot not only knew exactly what he was doing but had been specifically instructed by the Indian prime minister to blast Yeager's plane. In his autobiography, he later said that it was the “Indian way of giving Uncle Sam the finger”.

Yeager pressured the US embassy in Pakistan into sending a top priority cable to Washington that described the incident as a “deliberate affront to the American nation and recommended immediate countermeasures”. Basically, a desperate and distracted Yeager was calling for the American bombing of India, something that President Richard Nixon and his Secretary of State Henry Kissinger were already mulling.

But, says Ingraham: “I don't think we ever got an answer.” With the Russians on India’s side in the conflict, the American defence establishment had its hands full. Nobody had time for Yeager's antics.

However, Ingraham says there are clues Yeager played an active role in the war. A Pakistani businessman, son of a senior general, told him “excitedly that Yeager had moved into the air force base at Peshawar and was personally directing the grateful Pakistanis in deploying their fighter squadrons against the Indians. Another swore he had seen Yeager emerge from a just-landed jet fighter at the Peshawar base.

Later, in his autobiography, Yeager, the subject of Tom Wolfe’s much-acclaimed book “The Right Stuff” and a Hollywood movie, wrote a lot of nasty things about Indians, including downright lies about the IAF’s performance. Among the things he wrote was the air war lasted two weeks and the Pakistanis “kicked the Indians’ ass”, scoring a three-to-one kill ratio, knocking out 102 Russian-made Indian jets and losing 34 airplanes of their own.

Beyond the fog of war

The reality is that it took the IAF just over a week to achieve complete domination of the subcontinent’s skies. A measure of the IAF’s air supremacy was the million-man open air rallies held by the Indian prime minister in northern Indian cities, a week into the war. This couldn’t have been possible if Pakistani planes were still airborne.

Sure, the IAF did lose a slightly larger number of aircraft but this was mainly because the Indians were flying a broad range of missions. Take the six Sukhoi-7 squadrons that were inducted into the IAF just a few months before the war. From the morning of December 4 until the ceasefire on December 17, these hardy fighters were responsible for the bulk of attacks by day, flying nearly 1500 offensive sorties.

Pakistani propaganda, backed up by Yeager, had claimed 34 Sukhoi-7s destroyed, but in fact just 14 were lost. Perhaps the best rebuttal to Yeager’s lies is military historian Pushpindar Singh Chopra’s “A Whale of a Fighter". He says the plane’s losses were commensurate with the scale of effort, if not below it. “The Sukhoi-7 was said to have spawned a special breed of pilot, combat-hardened and confident of both his and his aircraft's prowess,” says Chopra.

Sorties were being launched at an unprecedented rate of six per pilot per day. Yeager himself admits “India flew numerous raids against Pakistani airfields with brand new Sukhoi-7 bombers being escorted in with MiG-21s”.

While Pakistani pilots were obsessed with aerial combat, IAF tactics were highly sophisticated in nature, involving bomber escorts, tactical recce, ground attack and dummy runs to divert Pakistani interceptors from the main targets. Plus, the IAF had to reckon with the dozens of brand new aircraft being supplied to Pakistan by Muslim countries like Jordan, Turkey and the UAE.

Most missions flown by Indian pilots were conducted by day and at low level, with the pilots making repeated attacks on well defended targets. Indian aircraft flew into Pakistani skies thick with flak, virtually non-stop during the 14-day war. Many Bengali guerrillas later told the victorious Indian Army that it was the epic sight of battles fought over their skies by Indian air aces and the sight of Indian aircraft diving in on Pakistani positions that inspired them to fight.

Indeed, Indian historians like Chopra have painstakingly chronicled the details of virtually every sortie undertaken by the IAF and PAF and have tabulated the losses and kills on both sides to nail the outrageous lies that were peddled by the PAF and later gleefully published by Western writers.

In this backdrop, the Pakistani claim (backed by Yeager) that they won the air war is as hollow as a Chaklala swamp reed. In the Battle of Britain during World War II, the Germans lost 2000 fewer aircraft than the allies and yet the Luftwaffe lost that air war. Similarly, the IAF lost more aircraft than the PAF, but the IAF came out on top. Not even Yeager’s biased testimony can take that away from Indians.